The last one is the most imporant～Promise me～ 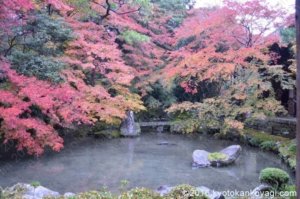 Rengeji temple used to be a Buddhist temple of Jisyu School located in suburb area in ancient Kyoto city. In the 15th century, Ohini no Ran, the largest civil war devasteted it. In 1622, Imaeda Minbu Chikayoshi who served to wealth Kaga Han (Han is a domain in federal period), brought it to Takano region to pray for the peace of his grand father’s soul with help of famous figure: Ishikawa Jozan, the founder of Shisendo temple, and Ingen Zenshi, the founder of Obaku school of Zen Buddhisim.

The word “Renge” means lotus but the temple was named after “Rengezo.” Rengezo is a Buddhist paradise on a huge lotus. 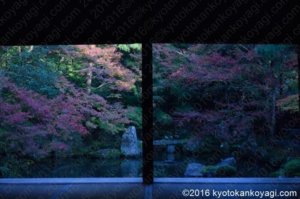 Rengeji has an extraordinary garden. It has small pond and amazing maple trees around it. The pond takes advantage of the Takano river as an irrigation source.  It is one of the most underrated garden in Kyoto. We can admire it in complete silence except fall. It is a so-called Gakubuchi Teien. Gakubuchi Teien is a technique to enjoy garden considering pillars as frame. 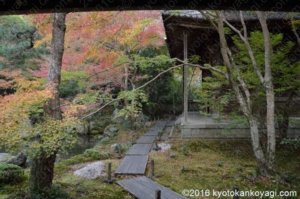 We can walk in the garden to the main hall. 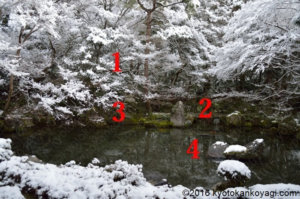 Horai san is a mountain in ancient China. In Taoism, it is a symbol of eternal life. In the garden, Stones stand for it. (1) On the Horai san, there is a turtle with ears which has a stela on its back. It is a mixture of Kirin and turtle. Kirin is an imaginary sacred animal who rules the sky. On the contrary, turtle rules the ground. They are put together and stand for the universe.

In addtion to it, there are Kame Shima island and Tsuru Ishi stone. Kame (turtle/tortoise) and Tsuru (crane) made a sign of good fortune. They imply there is something which brings us luck and there are the universe and eternal life i.e., the garden represents Jodo, a paradise in Buddhism. In the pond, there is a stone called Funaishi. Funaishi means a boat heading for Jodo. In a nut shell, the whole garden means we are in Jodo.

NO PHOTOS in the garden!

The garden is so quiet that it is suitable for meditation!

A statue of Gautama Buddha 釈迦如来像

In the center of the main hall, there is an old lacquered box with exquisite shell inlays. These inlays make stunning Shochikuzu (The picture of pine tree, bamboo, and Japanese plum.) and Kachozu (The picture of flower and bird). There is a statue of Gautama Buddha. To our regret, we are not able to see it for good. The box is so old that it will collapse with the statue when we open it. On the pillars in the both side of the box, there are plates. They read: “本源宗正派” and “覚苑永長春.” These sentence pray for a prosperity of Buddhist teaching.

On the left side of the box, you will find a statue of Amidaba. In 1571, Oda Nobunaga destroyed a Enryakuji temples and villages in the mount Hiei. Before his forces set a fire the temple, two monks leave there with a statue of Amidaba on their backs. They arrived a village in which Rengeji is located today and asked the villageoise to keep the staue in secret place. After Rengeji moved to the village, their descendants revealed the story and asked a monk to enshrine the statue.

On the right side of the box contains the statue of Gautama Buddha, there also is a box with shell inlays. You find the Kanji 寿 and 福. They both mean good fortune. Inside of it, there is a statue of Akala, the Deity who is a guardian of Buddhism.

The pillars of the main hall are made of Keyaki tree. It don’t grow straight. They are about 12 inches in diameter. They used to be enormous trees. The famous stage of Kiyomizu dera has also made of thick Keyaki trees. We cannot find such trees today.

The pillars stand on drum-shaped stones.

At the bottom of the doors of the main hall, there are figurine of cicadas. Cicada spends about 7 years underground. So, we see it as guardian of the darkness. When the doors are closed, the main hall is in darkness. They protect the statues there. 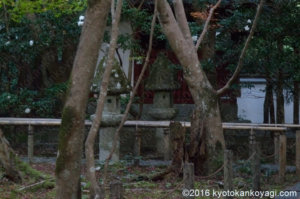 They are thinner than usual stone lanterns. They are in Rengeji style. The tea house in Edo period prefer them.

After the entrance gate, you’ll find about 300 statues of Buddha. They are excavated in the construction of Kyoto municipal tramway.

Rengeji is not a famous landmark like Kiyomizudera temple. So, it has scarce visitors except autumn leaves season and snowing days. You’ll find yourself in complete silence there. All you can hear is the sound of a stream. 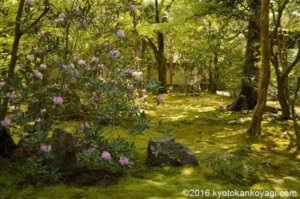 In late spring and early summer, we can admire so-called “Green maples.” Maple laves are famous as “Autumn leaves” but they are also amazing in green.

The garden has stunning autumn leaves. You can understand why I say Rengeji is one of the most underrated place. 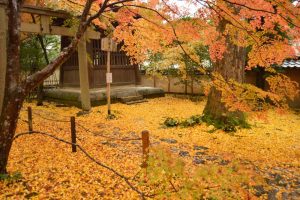 Near the entrance gate, you are on a carpet of ginkgo leaves. 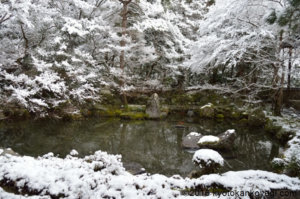 Only Kyoto enthusiasts visit Rengeji in snowing day. So tranquil.

Kyoto bus: In a minutes walk from Kamibashi bus stop.

Yumiyacho Bugukazari, the exhibition of Samurai Armors takes place for 3 days in Yumiya-cho district. In ancient times, the residents wore them and lead Mikohi (portable shrine) of Gion Matsuri. They don't attend the Matsuri but we can enjoy the armors today.
2020.05.14
For International ReadersGion Matsuri Festival

In 2023, Gion Ebessan/Ebisu festival is to be held at Yasaka shrine. With lots of photos and video, you can learn about the festival like Ebessan boat and Seven Deities/Gods of fortune, etc.
2019.01.07
For International Readers

The report of 2022 on Kawazu Zakura, the earliest bloom Sakura in Kyoto. We can find some of them in Ichijo Modori bashi bridge, Toji, Unryuin, and Philosopher's path.They go into full bloom around mid-March.
2022.02.03
Sakkura/Cherry blossom

Mishiho is a supreme ritual held in Toji temple in Kyoto. From 8th to 14th January, high-ranked monks visit Kanjoin temple three times a day to pray for the prosperity of our country, world peace, and good harvest of the year. Not sure whether Goshichinichi Mishio is canceled or not, due to COVID-19.
2020.01.12
For International Readersおすすめ記事

On December 31st and January 1st, people have Okerabi at Yasaka shrine. Let us learn its history and the way to enjoy them!
2018.11.21
For International Readers
スポンサーリンク
京都洛北蓮華寺の紅葉や庭園のみどころ、アクセス方法
東寺立体曼荼羅を詳細かつ簡単に解説【羯磨曼荼羅】
スポンサーリンク