In this article, we can enjoy a Moon viewing in Yasaka shrine in Kyoto. Moon viewing is a festival/ritual to admire the full moon in September with music and dance performances.

Viewing the moon. Are all Japanese people astronomers?

Moon viewing is a festival to celebrate mid-autumn and we adore the full moon.The day of the festival depends in ancient Japanese lunar calendar. These days, the festival is held in mid-September in Gregorian calendar.In this season, we can feel a coming of autumn though it is a mid-autumn festival.

In ancient times, people just enjoyed viewing the moon.In Heian period, the custom to watch the full moon in mid-autumn brought to Japan from China.The custom was acceptable because Japanese people found pleasure in admiring each season. The aristocracy loved to watch the moon with music and sake.

At the same time, autumn is a season for cultivating of crops. Cultivation is very important for us because Shinto has a close relationship to rice cultivation as I indicated in the last article.In autumn, we show our gratitude to Shinto Kami which represent nature that provides us with crops. 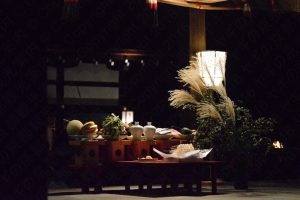 Take a look at the picture above.These are typical offerings prepared for moon viewing.You can find glasses at a right side of the picture.The glasses works as yorishiro （依代）which kami descend to. 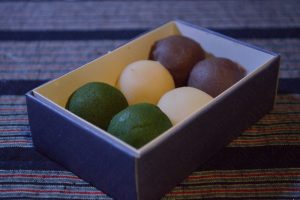 On the day of moon viewing, we watch the moon at home. we eat dango, the Japanese sweets because it resembles the moon. 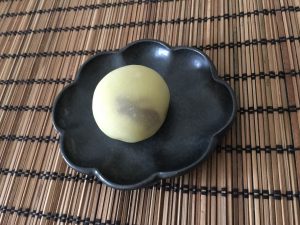 We watch the moon and find a rabbit in the moon sometimes.(The shadows on the moon look like a rabbit. )The rabbit on the moon based on the Buddhist anecdotes.Once upon a time, an old man was on a street.He was so tired and hungry that he couldn’t move.Then a monkey, a fox and a rabbit found him.The monkey gave him nuts and the fox gave him fishes.The rabbit couldn’t find anything to eat.Then the rabbit asked the monkey and fox to make fire.When they made fire, the rabbit jumped into the fire to make himself a food.The old man was Taishakuten, the guardian of Buddhism.He put the rabbit on the moon as the gratitude for its sacrifice .Take a look at a Japanese sweets in the picture above.It stands for moon and you can find a rabbit on it.

Moon viewing at shrines and temples

We also view the moon at shrines and temples.They hold many ceremonies.We enjoy the moon, music, and so on.

I show you Kangetsu-sai(観月祭),the moon viewing ceremony at Yasaka shrine.Kangetsu-saiis not famous as Gion Masuri festival but have family atmosphere.It is suitable for enjoying autumn night. 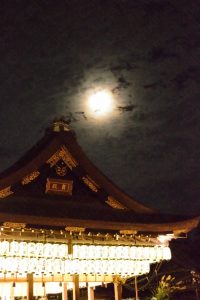 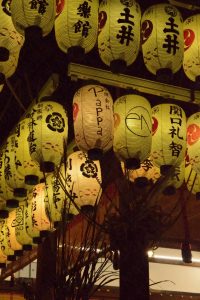 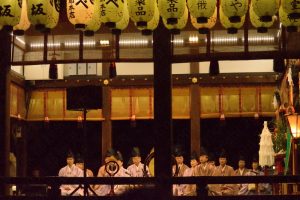 Kangetsu-sai is a Shito riual Yasaka shrine holds on the day of the full moon in September. 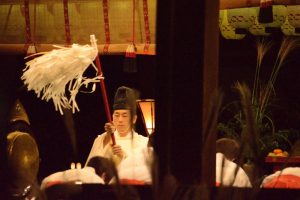 At the begging, a Shinto priest purify attendants and guests.After that, other priest read aloud the waka winners of competition composed.The waka was dedicated to susanoo-no-mikoto, the kami enshrined in Yasaka shrine.The kami composed waka for the first time in Japanese mythology.

Like other rituals, Gagaku (雅楽), the Japanese ancient music was offered to Kami.

After playing of Gagaku, bugaku(舞楽),the court music and dance was also offered.

This was the most beautiful moment in the ritual.The music sounds alive in complete silence of the night.The instruments is koto, the Japanese strumming instrument.

At the end of the ritual, they offered taiko(太鼓),the Japanese drums.It also dedicated to susanoo-no-mikoto. 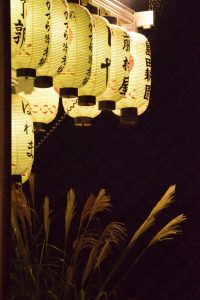 When the ritual was finished, we could have glasses in the picture above as amulet. 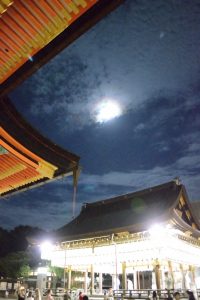 The night is still alive….

Rengeji is one of the most underrated Buddhist temple with extraordinary garden suitable for meditation. The garden stands for a paradise in Buddhism and has amazing autumn leaves.
2019.02.16

When did Yamahoko Parade start? : A short history of Yamahoko parade

Introduction Gion Matsuri festival is famours for Yamahoko floats and their parade lures lots of people to the ancient ...
2021.05.09
スポンサーリンク
八坂神社観月祭2019
【どこよりも詳しい】一発でわかる清水寺へのアクセス方法
スポンサーリンク