Genkoan is a small Soto school temple located near Kinkakuji temple. In Fall, so-called “Autumn leaves season,” it lures many Kyoto-enthusiasts to “Zen windows” and superb maple leaves. In addition to it, it has famous “Harakiri ceiling.” 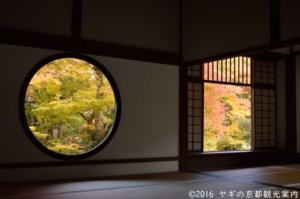 Zen windows are two windows located in the main hall of Genkoan temple. Each window stands for what Zen is. We love to enjoy autumn leaves thorough them. 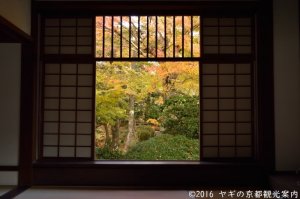 The square windows sands for a state of mind in which we lost and stray: We are not enlightened. Our mind is square, i.e., in flame. This means we are in predict. Some says each corner of the square represents Siku(四苦), or Four sufferings in the Buddhism teaching.

What are Four sufferings?

Four sufferings are to live, to get old, sickness, and death: To live in the world is painstaking physically and mentally. As we get old, we lost strength gradually. Sickness makes us suffer. We expect death with fear. The Buddhism tries conquer them. 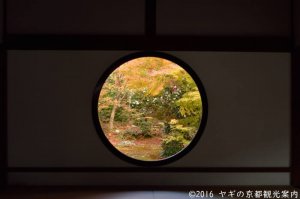 On the other hand, the circle window stands for a state of mind in which we are enlightened. It has no corners and free from anything, including Shiku. In a famous Zen drawing by Sengai, a Zen monk in the 18th century, only □△〇 are drawn. The signs means the same thing as the windows in Genkoan. △ represents a person who are in Zazen(座禅), a way to meditate and means we are in Nirvana. 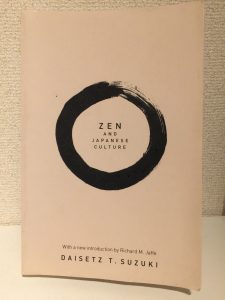 If you were interested in Zen, the following book is suitable for you.

The garden of crane and turtle 鶴亀の庭 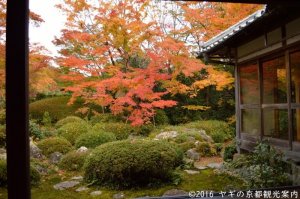 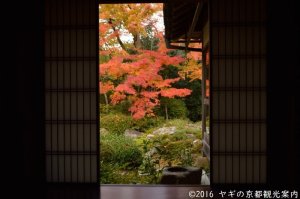 In Japan, we think crane and turtle bring us eternity. In the garden, we can see stunning vermilion maple leaves. Japanese people loves autumn leaves or cherry blossoms because not only they are beautiful but we can find eternity in them. In the Buddhism teaching, everything is subject to change: Nothing remains the same. On the other hand, they bloom every single year. We can find something eternal in them. 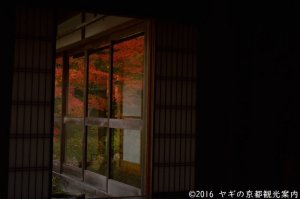 Enjoy the reflection in windows. That’s the way we take. I believe Japanese people love to admire something indirectly. 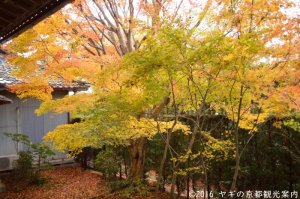 In addition to the vermilion, we also enjoy the yellow leaves. 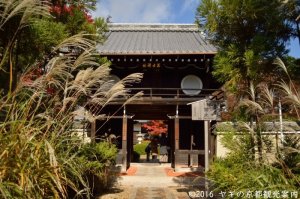 The front gate also has circle(s) and the square. They mean the same thing as the windows in the main hall do. In front of it, there are well-trimmed Kitayama sugi cedar and Susuki. 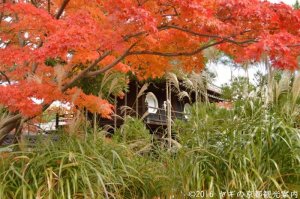 Susuki is the weeping white plants with green leaves.(Below the maple leaves in the photo). Susuki tells us we are in autumn every year. The trees near the Sanmon gate has crystal clear vermilion.

In front of the main gate 本堂前 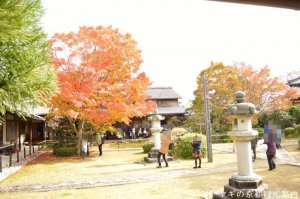 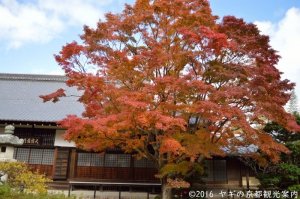 In front of the main hall, there is a huge maple trees that has many leaves in stunning colors.

In Genkoan temple, maple trees are in full bloom in mid-November.

Things to see in Genkoan temple

The main hall of Genkoan temple has “Harakiri ceiling.” In the eve of the battle of Sekigahara which put an end to the Sengoku period and led the establishment of the Tokugawa Shogunate, the Eastern army which aides Tokugawa Iyeyasu was sieged in Fushimi castle by the Western army. The samurais in the Eastern army found they couldn’t win the battle, they carried out Harakiri there in mid-August. The floor of the castle had blood stain because the corpses were left there for a month in the heat of summer. Some temples make the boards consisted the floor their ceilings because they wanted to let the deceased  enter Nirvana with daily prayers. The ceiling reveals what Harakiri means actually; They suffered in extreme pain by the very end of their lives. Harakiri is not suicide or self-inflicted death. It is a way to live with honor only true samurai can exercise. Please refrain from taking photo of the ceiling. It might insult to their dignity. It may sound strange but that’s the way of thinking of authentic Japanese people. 合掌。

Chigo means child in old Japanese. When the founder of the Genkoan temple looking for well in his thirsty, a child told him where it is. Since then, the well offers us fresh water. 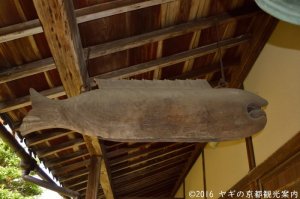 Gyoban means “Fish board.” Monks strike it with stick and tell a time. It is believed that it is fish-shaped because fish never sleep (Buddhist monk has scarce time of sleep.). It is the origin of Mokugyo, the wooden bell used in Buddhist ritual.

How to get to Genkoan temple?

Genkoan is located in a foot of a mountain and not a landmarks like Kinkakuji temple. So, we don’t have easy access. I’ll show you the way to get there by bus but it would be better to go there by taxi.

In front of Kinkakuji temple, there are many taxis waiting for tourists. It would be better to take them.

Genkoan was founded as a villa of Tetoh Gikoh, a monk belongs to Daitokuji temple in 1346. It went into decline and was rehabilitated as a temple of Soto school in 1694. It is a cozy place to visit and only known to so-called “Kyoto-enthusiasts.”

In Toji temple in Kyoto, 21 statues of Buddhist Deities make so-called 3D-Mandala to shows us Buddhist teaching. In this article, you can learn the role of each Deities in the Mandala.
2019.11.01

Nara has a huge statue of Buddha, a.k.a., Daibutsu, Birushanabutsu and the Great Buddha. In this article, you can learn anything about it; Its features, when and why it was built and the way to construct it.
2020.01.26
スポンサーリンク
源光庵は2022年4月1日より公開再開：迷いの窓、悟りの窓、紅葉、血天井などのみどころ
東福寺の紅葉2020：橋、みどころ、見頃を写真で宇宙一詳細に解説
スポンサーリンク