Many shrines in Kyoto has long histories but Heian jingu shrine is build recently. After Meiji Restration (1868), Tokyo was established as the capital of Japan. Emperor, royal families and government left Kyoto. The 1000 years of history and role of Kyoto as the capital of Japan was over. Kyotoite was devastated, felt deserted and feared that Kyoto might be bound to go extinct.
In the terror they never experienced, it was decided the Industrial exposition fair to be held in Kyoto in 1895, the 1,100th anniversary of the foundation of Heian-kyo(former name of Kyoto city). They decided to build Heian Jingu shrine as the monument of the exposition and make Kyoto alive anew.

During the exposition, Heian Jingu was not a shrine. It was a replica of “Chodo-in(朝堂院)“, the main buildings of Heian-kyo. After the exposition, the shrine enshrined emperor Kannmu who established Kyoto as the capital. In 1940, emperor Komei, the last emperor of Heian-kyo, was also enshrined. 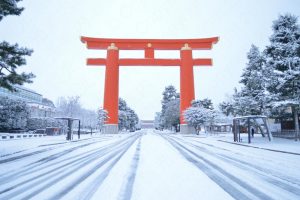 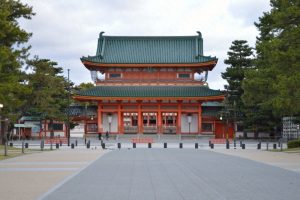 Oten-mon is a main gate of Heian Jingu shrine. It play a role as torii in usual shrine. Inside of it, there is a sacred area. 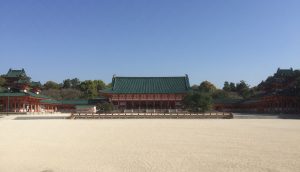 Inside of the gate. A building in center is the main building of Heian Jingu shrine. It is a replica of “Chodoin” and called “Daigoku-den“. 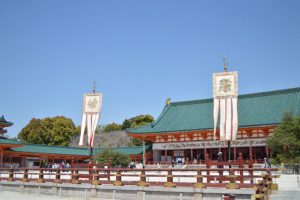 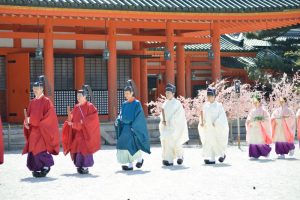 Take a closer look at Daigoku-den. There are two flags. The picture was taken on the anniversary of commemorating of the enthronement of emperor Kammu. We can not see these flags usually. 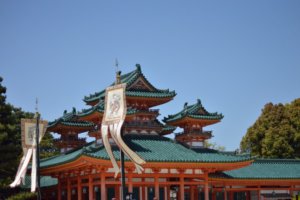 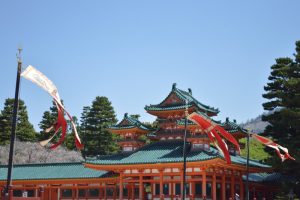 Both side of “Daigoku-den“, there are two buildings.The left is “Byako-ro (white tiger tower)” and the right is “Soryu-ro (Blue dragon tower)”. These names of towers are based on “Shizin-so-oh (四神相応)”. “Shizin-so-oh” is a formula for prosperity. “Heian-kyo” and Heian Jingu shrine were built on it.

Cherry blossom and “Hanami” in Japan 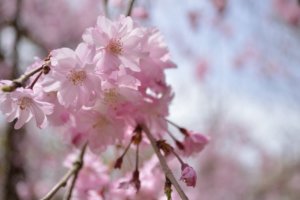 “Hanami(花見)” literary means “Flower viewing”. At the begging of every spring, we admire “sakura(桜), (cherry blossom)”. It is our traditional custom and cultural inheritance.
The history of Hanami dates back to Nara period (710-794). At that time, aristocrats enjoyed “Ume(梅), (Japanese plum)”. In Heian period, they began admiring Sakura instead. 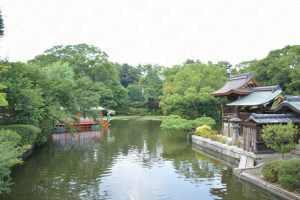 It is said that the first “Hanami of sakura” was held by emperor Saga of Heian period at “Shinsen-en(神泉苑),(picture above)”, the huge pond in Heian-kyo city. 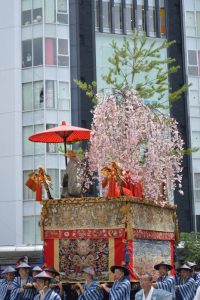 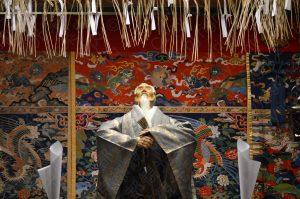 Under the cherry blossom trees, people admired sakura with sake and composed poem. The picture above is “Kuronushi-yama” of Gion matsuri. The old man under the umbrella is “Ohtomono-Kuronushi”, the famous poet and high-ranking official of Heian period. This “Kuronushi-yama” gives us a good example of Hanami in ancient times. Hanami was still for imperial court and aristocrats.
In Edo period, Hanami became popular among common people under the encouragement of Tokugawa Yoshimune, the 8th Shogun of Tokugawa Shogunate. Now that Hanami was a cheerful feast for anyone.

This is a history of our love for Sakurabut something reminds secret:Why does Sakura fascinate the Japanese so much?

Before the answer, see the video below.

What do you feel about it? The wind blew away flowers of tree? Or did you hear the wind sang as Haruki Murakami asked?

Most of Japanese people find sakura “儚い(hakanai)”. Sakura‘s bloom lasts only 1 week and we can not expect when it come into bloom or goes away exactly. For the Japanese, the fact about Sakura is equivalent to the word hakanai.

“儚い(hakanai)” usually translated as ephemeral. I believe that is proper translation but there is a difference between these Japanese and English words. We find “mujo (無常)” behind the word “hakanai”. “mujo (無常)” literally means “Nothing lasts forever.”, or “Nothing reminds the same. I’ll show you an example.

What do you feel about it?

The poem implies what Mujo is. Mujo means not only”Nothing reminds the same.” but “life still goes on.”. A final door was not shut.

This is what the Japanese feel about Sakura in spring.

The area of shrine 境内 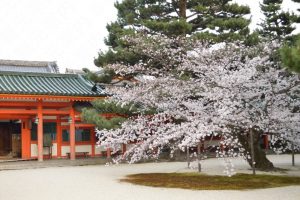 Pass through the Oten-mon gate and turn left. You can see a sakura tree. 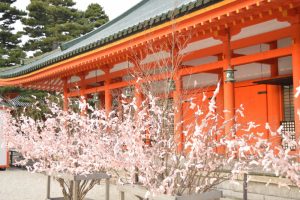 These are not sakura trees. Something seem to be sakura flowers is “Omikuji“. “Omikuji” is a piece of paper tells your fortune. We tighten it to a tree after reading. In Sakura season, Heian Jingu shrine gives us pink omikuji to make artificial Sakura trees. 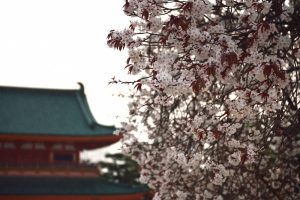 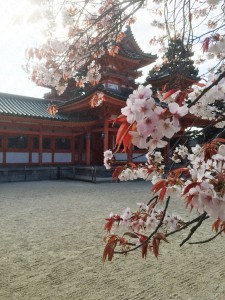 This is “Sakon no sakura” planted in front of “Daigoku-den“, the main building. 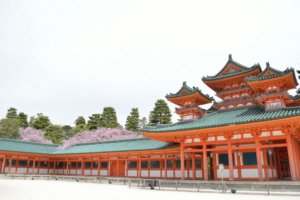 My favorite sakura in Heian Jingu shrine. It called”枝垂れ桜(Shidare Zakura)”. “Shidare Zakura” is translated as “Weeping cherry”. I don’t think it is proper translation because we, the Japanese, do not see Shidare Zakura weeping. 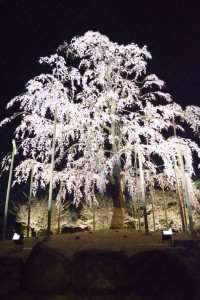 This is a typical Shidare Zakura of Toji temple. “枝垂れ桜(Shidare Zakura)” literally means “Sakaura which has dropping branches toward grand”. 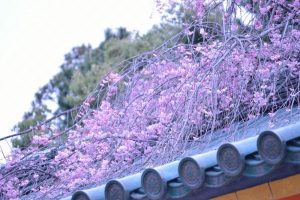 This shidare zakura lasts just a couple of days. I believe it is the most “Hakanai” sakura in Kyoto. 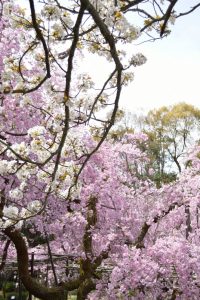 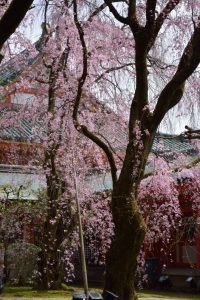 In The Makioka Sisters, a novel written by Junichiro Tanizaki, this Shidare zakura is described “The most beautiful flower in Kyoto”. 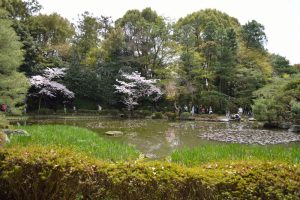 We can see tiny sakura around Dragon Pond. This pond is famous for irises. 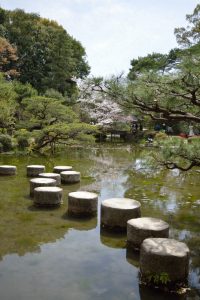 This is stepping stone bridge in Dragon Pond. These stones represent the spine of dragon. They used be pillar stones of Sanjo and Gojo bridges. Near the pond, there is a tea house. We can enjoy sakura with Japanese tea and dango. 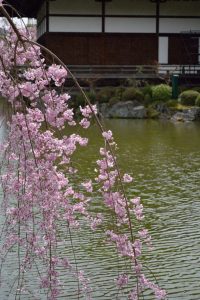 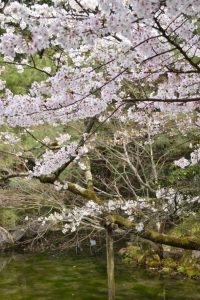 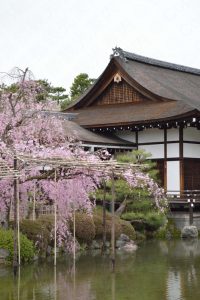 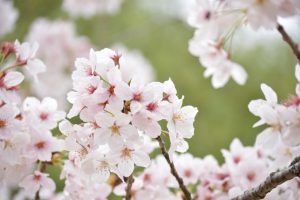 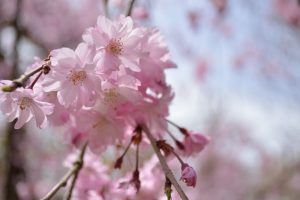 In East Shinen, we have many kinds of sakuras. 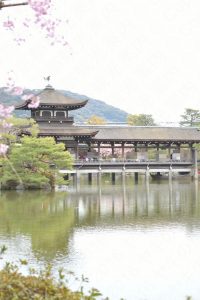 This is Seiho pond. The building over the pond is “Taiho-kaku” bridge. 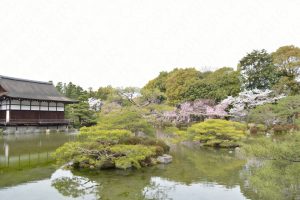 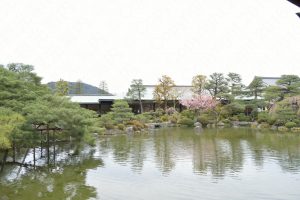 When is Sakura of Heian Jingu shrine in bloom?

The main area of the shrine

From late March to early April.

A couple of days later than the sakuras of the main area.

Get off at “Okazeki-koen, Bijutsukan, Heian Jingu mae” bus stop.

Get off at “Okazaki michi” bus stop.

Get off at “Higashiyama Nijo, Okazaki Koen guchi” bus stop.