Where can we give them Senbei? どこであげるか

Nara park is a large place. We can not find Sika all around the park. Usually, most of them are in the area enclosed in green.

The nearest station is Kintetsu Nara station. We usually walk to the park. Around the blue alien, there is the first Sika Senbei stand we encounter. There are Sika around it. 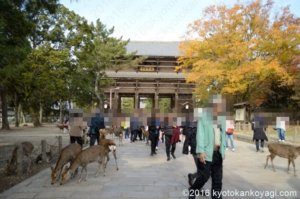 The hot spot is indicated in the blue Sika. The red lines are the path to the Daibutsuden hall. Sometimes Sika walk along with you to the hall.

When can we give them Senbei? いつあげるか 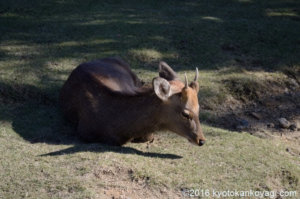 As I say before, Sika are greedy in morning. Around noon, they have enough Seibei and some enjoy napping. Sika sit on the ground is not hungry and they don’t pay attention to Senbei. Sika in need always get close to you. Sika in greed make you worried or feared. For your safety, it would be better to feed them in evening. 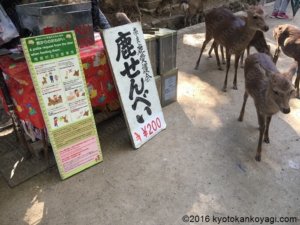 It is believed that Sika in Nara park do not steal Sika Senbei of Senbei stand but some of them make attempt to steal them. On the other hand, some stand owner gives them something in a large bag. 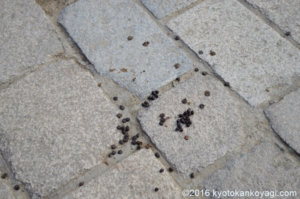 There are over 1,000 Sika in Nara park and we see many their poop. I suppose you step on some of them without fail. So, prepare wet wipe. Or, take them off of your shoes with branches on the ground.

Why are there many Sika in Nara park? なぜ奈良公園にシカさんがいるのか

As a poem in Manyo shu, the oldest compilation of Japanese poem (the new Imperial era Reiwa was named after a poem in it), Sika lives around Mt. Kasuga located in the east of Nara park.

In the 8th century, Kasuga Tasiha shrine was founded. It is believed that Takemikazuchi no Mikoto, the Deity enshrined there, came to the shrine on a white deer. People consedered Shika as messenger of him since then.

How to get to Nara park 奈良公園へのアクセス

In Toji temple in Kyoto, 21 statues of Buddhist Deities make so-called 3D-Mandala to shows us Buddhist teaching. In this article, you can learn the role of each Deities in the Mandala.
2019.11.01
スポンサーリンク
奈良公園で鹿さんに鹿せんべいをあげて幸せになる方法
清水寺の御本尊：十一面千手観音像のご利益
スポンサーリンク

橿原神宮紀元祭2021と神武天皇と日本のはじまり：皇紀2681年はコロナで中止
What’s goin on in Kyoto? In January, 2021 With COVID-19
Gozu Tenno and Yasaka shrine: He is still alive in the fear of COVID-19 牛頭天王英語で説明
牛頭天王と八坂神社：疫病退散とコロナのご利益
Yasaka shrine is to be designated as a National Treasure