On 4th Janurary, around 1:30 p.m., Kemari dedication takes place at Shimogamo shrine. Kemari is a traditional Japanese foot ball game which has 1400 years of history. Let us learn what Kemari is on video and text: its history, how to play it, and so on.

A short history of Kemari

Did Japnan give birth to Kemari?

Today, many people believe that Kemari is a traditional sports indigenous to Japan. The truth is that Kemari was born in ancient China. It was brought to Japan with the introduction of Buddhism in the 7th century. Since then, people loved to play it without regardless of classes they belonged.

In Heian period, it was popular sports among court nobles. It is described in The Pillow Book, a famous essay written by Musasaki Shikibu. “Kemari is not refined, but amazing sports to play”, she was quoted as writing.

When Kemari was introduced, the Soga clan, the most prosperous clan at that time, exercised huge political power. The imperial court was a puppet regime and Soga No Umako, the most successful man in the clan, even assassinated the emperor.

One day, Nakano Oh Eno Ohji, a prince of the emperor Jomei, played Kemari and his shoe came off. Then, Nakatomi No Kamatari found and handed it to the owner. Kamatari was a distinguished states man. This encounter lead consecutive revolutions: The emperor and the Imperial family seized power as the ruler of Japan again.

How do we play Kemari? 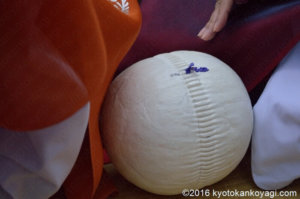 The word “Keamri” means “a ball to be kicked.” Two hemisphere made of deerskin are put together with a belt made of horse skin. A player let me have it. It was as light as  balloon. 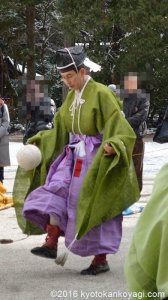 The green garment is Marizuikan and purple trousers are called Maribakama. The black hat is called Eboshi. 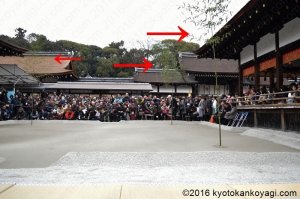 The court is called Mariba and about 50 feet in length and width. Each corner has a tree named Shikigi. Traditionally, they are different trees: Cherry blossom, maple, pine, and willow trees. In the photo, there are four bamboos.

Pray for a game 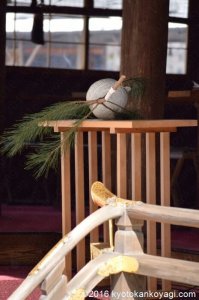 Keamri zome is a dedication to the Deity of Shimogamo shrine. Mari was put on a branch of pine tree and priest purifies the ball. After that, a player bring the ball and removes the branch.

How to play Kemari?

Kemari is usually played by 6 or 8 players.(In the video, 8 players). Kemari is not a game of win or lose. The aim of it is passing a ball to each other. Players kick mari wihtout bending their knees and showing sole of their foot because these deeds are considered rough.

Players shout out “Ari,” “Yah”, and “Oh”. These are names of the Deities of Kemari who descend to Shikigi.

Kemari doesn’t have match time. It is finished when a chief player think a game is matured.

Now we are ready to enjoy Kemari game. Enjoy the video!

How to get to Shimogamo shrine?

Hatsumode in Kyoto 2022 : Yasaka shrine provides you with extreme blessings!

In this post, I'll show you what is going on here in Kyoto. The original one, written in Japanese, is posted in last March. Since then, I have revised it for nearly a year. It is a long article and I can't translate it right now. So, I will do that in anti-chronicle order gradually.
2021.01.17

CANCELED DUE TO COVID-19.This is the absolute guide of Ashizoroeshiki of Kamokurebeuma held at Kamigamo shrine. It is an important ritual of Aoi matsuri festival in Kyoto.
2019.04.29
スポンサーリンク
京都護王神社で初詣2019：ご利益とイノシシの関係
京都摩利支尊天（禅居庵）で初詣2019：イノシシとご利益、かわいいおみくじもあるよ。
スポンサーリンク