And Emperor Naruhito declares his accession on 22th October 2019. (Sokui no Rei)

On 13th March 2019, Saiden Tentei ni Gi took place in the Imperial Palace. In this ritual, priests decide where Yuki (the estern part of the archipelago) and Suki (the weastern part) region are. The Emperor uses the rice harvested there in Daijyosai.

Their decision depends on Kiboku (亀卜) fortune telling. In this ritual, the priests put plates made of sea turtle shell over fire. Then, the shell get crack to indicates Yuki and Suki region. The ritual is not open to public and we have no exact idea what it is. All we can know is it is a ritual found in Taiho Ritsuryo, the compilation of law enacted in 701.

The Kiboku decided Yuki is Takanezawa in Tochigi prefecture and Suki is Nantan in Kyoto prefecture. At the same time, rice paddy called Yukiden and Sukiden individually.

Daijyokyu no Gi is the most important ritual in Daijosai.

Daijyokyu is a building complex temporary constructed for Daijyosai. On July 2019, the construction of Daijyokyu of Reiwa era started. 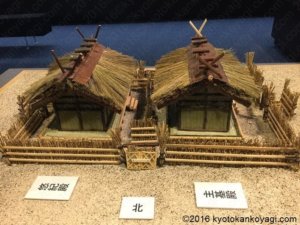 Daikyo no Gi is a party. The Emperor and guests enjoy the meal including rice harvested in Yukiden and Sukiden. It will be held on 16th and 18th November.

Kuze Komagata Chigo is the most important figure in Gion Matsuri festival. Without him, Gion Matsuri cannot be accomplished.
2020.07.20
Gion Matsuri Festival

The main hall and the stage of Kiyomizudera are over a valley, constructed in Kakezukuri (懸造) method.People used to jump off the stage to make their wishes come true.
2023.01.22
For International Readersおすすめ記事

Gozu Tenno is a Deity enshrined in Gion sha, the former Yasaka shrine. Gion matsuri is started oh his story and its still alive in the fear of COVID-19.
2021.01.06
For International ReadersGion Matsuri Festival

Let us learn the way to feed Sika deer with Sika Senbe crackers in a video with precise information. You also learn why lots of Sika is in Nara park.
2019.12.02
For International Readers
スポンサーリンク
京都の紅葉2022年：おすすめ早朝モデルコース清水寺→金閣寺→永観堂→南禅寺→天授庵→清水寺ライトアップ
永観堂（禅林寺）の紅葉ライトアップとアクセスの秘訣2021
スポンサーリンク