And Emperor Naruhito is to declare his accession on 22th October 2019. (Sokui no Rei)

In this article, we learn the meanings of these enthronement ceremonies. 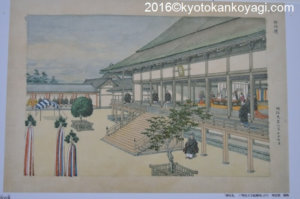 Prior to Skuirei and Daijosai, the dates they take palce are decided. With the Japanese Imperial Regalia, the new Emperor announces them to Amaterasu Ohomikami through Yata no Kagami in Kashiko Dokoro hall.

After Kashiko Dokoro hall, he announces the same things to ancestors at Koreiden hall and all the Deities in Shinden hall.

On the very day of Sokuirei, with the Japanese Imperial Regalia, the new Emperor reports his accession to the Imperial Throne to Amaterasu through Yata no Kagami Ohmikami in Kashiko Dokoro hall.

History of Sokuirei Seide no Gi

The new Emperor declares that his ascension to the Chrysanthemum Throne was completed at Sokui no Rei. Today, it is called Sokuirei Seiden no Gi.

In ancient Japan, Both of them took place at the same time. When Emperor Kanmu succeeded to the throne, They were separated. 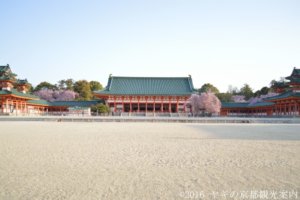 Shoku Nihongi, a Japanese history book compiled by the Imperial court, describes: Emperor Kanmu succeeded to the Chrysanthemum Throne due to the abdication of his father. On April 3rd of 781, he ascended to the throne. On 15th, he announced his ascension to the throne at Daigokuden of Heiankyo City. (The photo is of Heinajingu, a replica of Daigokuden of Heian kyo.) In 1177 Daigokuden was caught by fire and burned out completely. This is the last time Heiankyo city saw it. Since then, it was never rebuilt again. After the incident, Sokui no Rei took place at a building of government office. Around Edo period, it is held at Shishinden in the Imperial Palace in Kyoto.

By the end of Edo period, Sokui no Rei was in an ancient Chinese style. 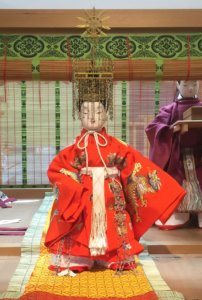 In 802, Emperor Saga decided to wear Konben Jyunisho, an outfit of China. The Emperors wore it by the Sokui no Rei in 1847. Kon of Konben means dragons with a curved neck embroidered on the vermilion coat. Ben of Konben means the crown the figurine wears. 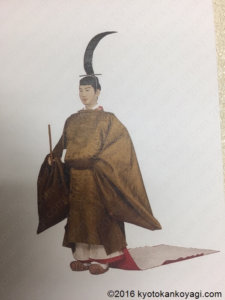 Today, Sokui Seiden no Rei is held in “Seiden Matsu no Ma” in the Imperial Palace. The Emperor is in an outfit called “Onsokutai.” “On” is a prefix which means respect for someone. Actually, he is on “Sokutai” called “Kourozenn no Goho.” This garment is dyed in Korozan color only allowed for the Emperor. 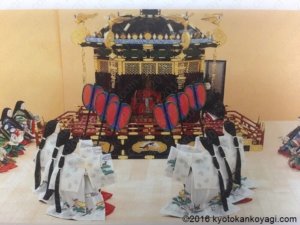 After Sokuirei Tojitsu Kasikodokoro Ohmae no Gi, the Emperor enters Seiden Matsu no Ma with the Empress and get into “Takamikura” and “Michodai” individually. (The photo describes the Sokui no Rei in Heian period.)

And the new Emperor declares his accession to the Imperial Throne and pray for the world peace.

Then, the prime minster of Japan felicitates his accession on behalf of us and makes Banzai Sansyo.

Banzai is an act to congratulate something of someone.  A person says “Banzai” loud raising their both hands. Banzai is a word of abstract. In this case, “Long live the Emperor!”  When we do Banzai Sansyo, we do this three times.

“Previously, I acceded to the Chrysanthemum Throne on the Constitution and the act of Special measure on concerning the Imperial Household law.

Today, I hold Sokuirei Seiden no Gi and declare my enthronement to the world. 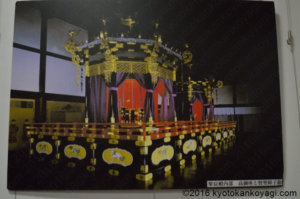 “Nihon Shoki”, the second-oldest book on Japanese history, indicates Takamikura used to be a place on a huge rock where the ancestors of the Royal family were enshrined. The emperors inherited their throne there to confirm their status as a ruler: As described in the article on Senso, Ninigi no Mikoto, their ancestor, descended to Japan as a ruler by the order of Amaterasu Ohmikami in Japanese mythology,

Takamikura was used in an enthronement ceremony at least in the 8th century. It has an octagon-shaped roof which has 8 pillars. In Japanese mythology, the archipelago is referred as “Ohyashimakuni (大八島国/大八州国)” which means “A country consists of 8 islands. The octagon roof stands for Japan. Its roof has Ho Oh on Each corner and at the top. Ho Oh is an imaginary bird in ancient China. It is believed to bring us good luck. (The photo is Ho Oh of Kinkakuji temple.) 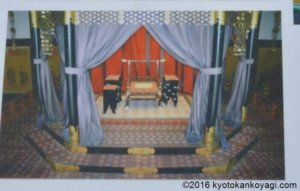 Inside of Takamikura, there are seat and three small tables called “An”. In an enthronement ceremony, a new emperor seats on the seat and Jiju (a person serves the emperor) put Kusanagi no Tsurugi, Yasakani no Magatama, Kokuji, and Gyoji on these tables. 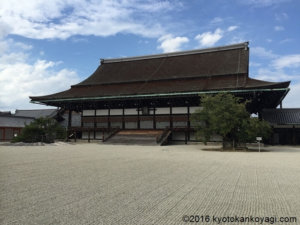 Takamikura is usually placed in Shishinden of Kyoto Imperial place. Around one year ago, GSDF helicopter brought it to the Imperial Palace in Tokyo.

Michodai looks almost the same as Takamikura. It is for an empress and little smaller than Takamikura. It also is placed in Shishinden of Kyoto Imperial palace. 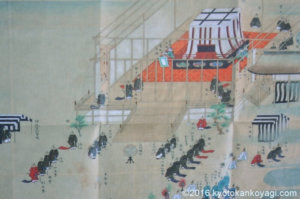 The photo shows us the Sokui Rei of Emperor Meiji. The Sokui Seiden no Rei of Emperor Akihito was held in almost the same fashion. In front of Seiden Matsu no Ma, attendee seated seated themselves on small chairs. There were eleven banners hanging on Hoko behind them. Take a look at the photo. There are spears. They are Hoko. Hoko They are not arms. When something sacred, like ritual, is held, hoko are sometimes placed in shrines and temples for the purpose of giving it to dignity.

The Hoko in the photo have short bans in individually. In Sokui Seiden no Rei, bans are placed in the same way.

The following are examples of the banners. 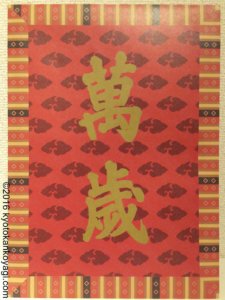 Banzai ban was made of Zuiun-cloud woven silk. Each of them had letters 萬歳 (Banzai) were embroidered on it. They stood for eternal peace.

Nisho Toban was made of Zuiun-cloud woven silk and had an embroidery represented the sun. It stood for the universe.

Gessho Toban was made of Zuiun-cloud woven silk and had an embroidery represented the moon. It also stood for the universe as Nissho Toban does.

Kikkasho Dai Kinban were made of Zuiun-cloud woven red (the right one) white (the left one) silk. Each of them had a golden chrysanthemum-crestembroidery which stood for the Imperial House of Japan. 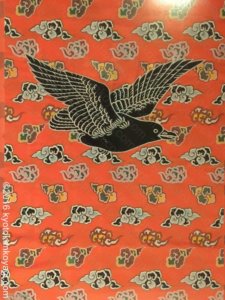 Kikkasho Chu Kinban were made of Zuiun-cloud woven silk and shorter than Kikkasho Dai Kinban. Each of them had a golden chrysanthemum-crestembroidery which stood for the Imperial House of Japan.There were 5 colors of them; Blue, yellow, red, white and purple ones.

Kikkasho Sho Kinban were made of Zuiun-cloud woven silk and shorter than Kikkasho Dai KInban. Each of them had a golden chrysanthemum-crestembroidery which stood for the Imperial House of Japan.There were 5 colors of them; Blue, yellow, red, white and purple ones. 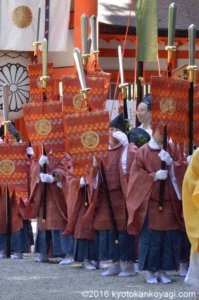 Hoko had small banners made of Zuiun-cloud woven silk. It had embroidered Tomoe Mon crest. (The banners in the photo don’t have Tomoe Mon because they are those of Mikage Matsuri.) 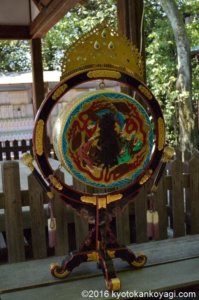 Sho is a drum hanging on a fire-shaped frame. When it was stricken, the attendees stood or sit on seats. (The Sho is in the photo is not the one for Sokui Seiden no Gi.) 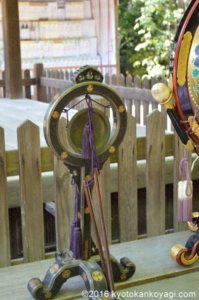 Sho is a drum hanging on a fire-shaped frame and smaller than Sho. When it was stricken, the attendees bowed. (The Ko is in the photo is not the one for Sokui Seiden no Gi.)

The Afro duckies are messengers of AFRO BUDDHA in Konkai Komyoji temple. They make 3-D Raigozu to save those who in despair. 金戒光明寺のアヒルさんにつき、英語で説明申し上げます。合掌
2022.03.11

In 2020, Rurikoin is open to us from 1 October to 10 December. We are not allowed to enter it without reservation to enjoy Autumn leaves and 'Yukamomiji."
2018.05.25
スポンサーリンク
The Enthronement of the Emperor of Japan; Senso
京都の紅葉2020；洛南の名所から穴場まで、ライトアップの有無などのおすすめ情報
スポンサーリンク