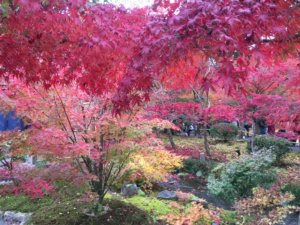 At Eikando, we can enjoy many colors. The peculiar thing is that we can see vivid and pale colors at the same time. We cannot admire autumn leaves in that way in any other places. In addition to it, the leaves in Eikando seem fresh as if they contained lots of water. I suppose that is the reason people say “Eikando is the best place to see autumn leaves,”

At night, the garden is illuminated and we can enjoy one of the most amazing illumination in Kyoto.

The colors of autumn leaves in Eikando 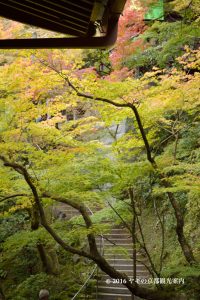 When leaves start to turning their colors, we can enjoy the way green leaves grow into vermilion or red ones. Around the 1st week of November is the best time to admire them. 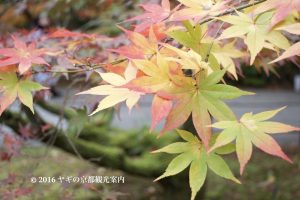 Around 15th November, a couple of days earlier than the best time to visit Eikando, there are many leaves in pale colors. 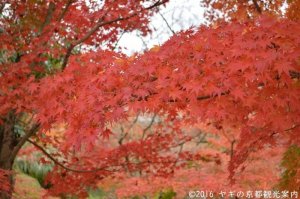 I suppose you saw autumn leaves in very vivid red like this in books and websites. The truth is that it is not easy to find them any place you go. Eikando is one of the rare places to find them with ease. 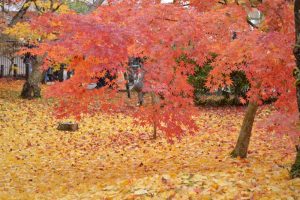 The most popular color of autumn leaves in Kyoto. In Eikando, it is so alive. 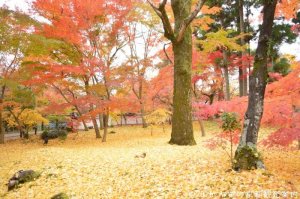 We have Japanese maple in yellow in Eikando but the most recommended is ginko in yellow. The photo is the most beautiful place in Eikando. We discuss where it is later.

The purple is also alive and vivid in Eikando. 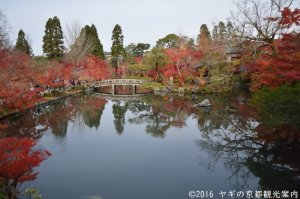 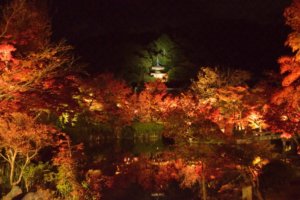 Mizukagami is an art to admire scenery : To see the reflection of it instead of the scenery itself. 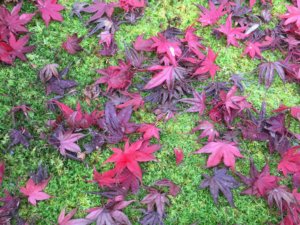 Eikando has beautiful moss. You can enjoy the leaves fallen on them.

Where to enjoy autumn leaves?

In Eikando, we can admire many colors as you see. Now let us make sure the places we can enjoy them in the map. The vermilion line indicates the area we can be in. The octopus indicates the entrance. In daytime, we can enter the buildings like main hall. At night, we are allowed to enter only Amidado and Gasendo. 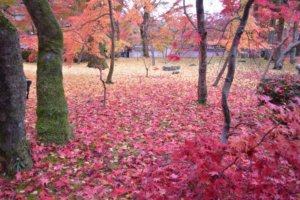 This is the best place in Eikando. At the time I take the photo, the ginko had fallen completely and maple leaves started to fall over them: The best time to adore the most amazing autumn leaves in the world. They are very, very extraordinary. They take your breath away. 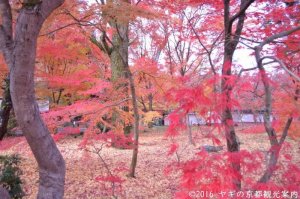 The last year, the ginko leaves fall but maple leaves still stayed on the trees, i.e. we didn’t have the best time. The photo was taken last year. It is beautiful though it was not taken in the best time. Extraordinary, anyway.

Don’t miss them! The best time is around 20th Nov.～ 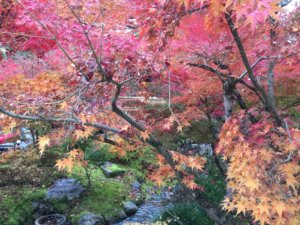 We can enjoy many colors at the same time.

Along the red line 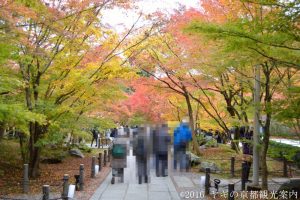 We can admire pale colors there. The red line indicates the path and there are extraordinary mosses along it. Around the grey alien, there are maple tress on cliff edge. It is called “Iwagaki momiji” and very famous. We can reach there at night. 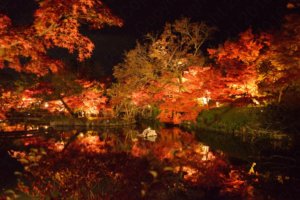 There is a bridge around it. We have a good view of the pond there but it is prohibited to stay there. Don’t worry, we also have places with good view around the pond.

At night, we have an extraordinary view of the pond and the pagoda. We have a tea house around there. Enjoy tea and wagashi with autumn leaves. 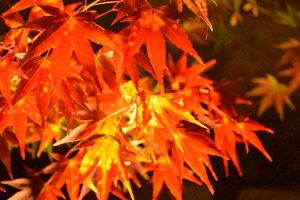 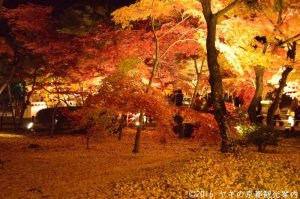 The illumination in Eikando is so popular that it is always crowded. The illumination usually starts at 17:30 (It is not officially announced yet). Visitors always wait in line. If you wanted to enter Eikando at 17:30, it would be better to be there around 16:30~17:00. At night, the path in Eikando is one-way. It takes at least 1 hour to stroll around the garden. It is not good idea to go other illumination event on the same day. If you could leave Eikando 19:50, you would join the illumination in Tenjuan temple.

The last year, from 7th Nov. to 6th Dec., Eikando is illuminated. The entrance fee was 600 yen.

The best time to visit Eikando

Evey year, the most of autumn leaves are in full bloom around 20th Nov. We can enjoy them from 15th to 25th. Eikando temple is the most famous autumn leaves site in Kyoto. “Eikando” is a de facto name of Syuju Raigozan Zenrinji (聖衆来迎山無量寿院禅林寺). It used be a villa of a court noble and became a Buddhist temple in 863. The name Eikando is named after a monk who brought prosperity to Zenrinji. His name was Yokan (written 永観 in kanji). Eikando is written 永観堂 in kanji. They are pronounced different but has the same letters. 永観 is read “Eikan” usually. So, it is called Eikando.

The temple has about 3,000 maple trees in the area and is sometimes referred as “Eikando, the autumn leaves.” In the main hall, “Turning-around Amidaba.” At the vemilion alien, we can enjoy pale colors. At night time, Eikando is illuminated. This year’s schedule was not yet announced.

It would be better to be Eikando before 18:00 because people wait in line in front of the entrance.

How to get to Eikando temple?

Attention In the autumn leaves season, buses, mostly No.5、100、102 are often crowded. It would be better to go to Eikando by train. If you wanted more information, check the link below.

I'll show you the sites not to be missed: 5 popular ones and 5 underrated ones. On the latter part, you can see popular annual events in Kyoto. Enjoy the ones you would like. 合掌
2022.05.25

On May 21, the declaration of emergency was lifted in Kyoto and we can visit many Shinto shrine and Buddhist temple again.This article shows you the list of them. Some of them offers shortened open hrs and ask for Social distancing and other things.
2020.06.03
スポンサーリンク
Konkai komyoji temple: the overlooked autumn leaves in Kyoto
金閣寺の紅葉2020：みどころと見頃、ライトアップ、そして修羅場
スポンサーリンク