Tea party is canceled. Check the website of Kamigamo shrine. Kyokusui no En may be canceled or altered due to COVID-19.

Kyokusui no en (曲水の宴) is a way of party.  Participants are seated along a stream in the garden and compose poem before a Sakazuki, a small dish filled with Sake, reaches in front of them.

Its origin dates back to ancient China.

We can find a description about it in the book in ancient China. For example, The Jingchu Suishij(『荊楚歳時記』), the famous compilation of annual events in the 7th century, tells us that a ritual for purification took place on March 3rd in lunar calendar. In Yin-yang philosophy, yang is maximum on the day and it was needed to make anything pure as possible.

Japan imported it as a ritual in the imperial court in 485 as reported in The Nihon Shoki (『日本書記』), the oldest official chronicle of Japan compiled in 720. In addition to it, The Kuji Kogen (『公事根源』), the study on practices of the Imperial court, and The Tale of Genji (『源氏物語』) also refers to it.

As it began as a ritual of the Imperial court, aristocrats started to hold Kyokusui no en at their private residence in the middle of Heian period.

In Kamigamo shrine, Kyokusui no en was held in 1182 for the fist time but it stopped sometime later.

In 1960, it re-started as celebration of the birth of Naruhito, crown prince of Japan and Shokeien garden was constructed as a place for it but  was discontinued again.

Some thirty years later, Kyokusui no en had a great opportunity. In 1993, Crown prince Naruhito was married. In addition to it, in 1994, Kyoto was to be celebrate the 1200th anniversary of Heian period and Kamiagmo shrine was to perform Shikinen Sengu, the reconstruction of it put into practice in every 21 years.

As described in the last chapter, Kyokusui no en was began as a ritual of the Imperial court and it was started to held among aristocrats. Kamo Kyokusui no en is a reproduction of the latter.

In Heian period, edifice of aristocrats has a large pond.  They put boats on it and enjoyed music and dance performances as shown in the video of Mifune matsuri.

On the other hand, their residence had small stream. They also held a party near it to make poem as we see in the vedeo of Kamo Kyokui no en.

On the second Sunday of April

Prior to Kamo Kyokusui no en, participants pay a visit to the main hall of Kamigamo shrine. 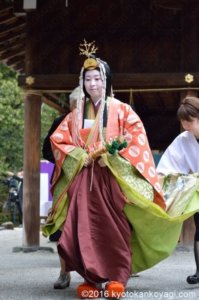 In Kamo Kyokusui no en, Saioh dai, a lady plays a role of a priestess participate in Aoi matsuri on behalf of the empleror, is invited as a guest. In Aoi matsuri, it is hard to see her because of lots of crowds but we don’t have them on Kamo Kyokusui no en. We can admire her beautiful Itsusuginu Karaninumo (五衣唐衣裳), a.k.a. Junihitoe (十二単). She and the other participants purify themselves at Tsuchinoya and head for the main hall.

Enjoy the Saioudai video and make sure who she is. 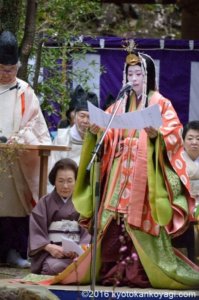 In Shokeien garden, Kamo Kyokusui no en started at 1:00 p.m. 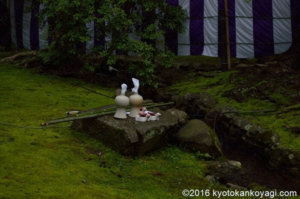 Ushou (羽觴), a small bird which carries Sakazuki on its back is put on a stream. 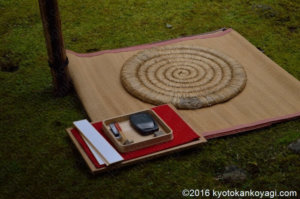 Poet be seated on the mat. 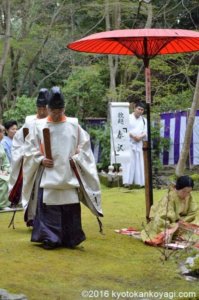 The poets read poem on a subject. 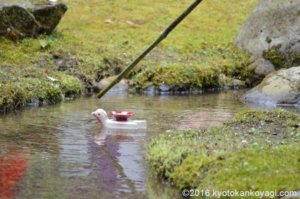 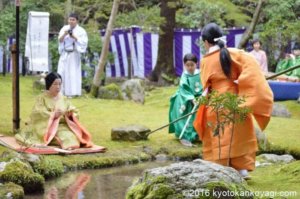 Usyou bring Sake in Sakazuki to them. 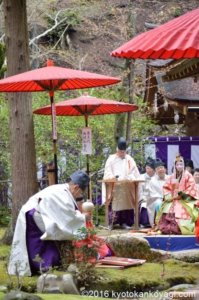 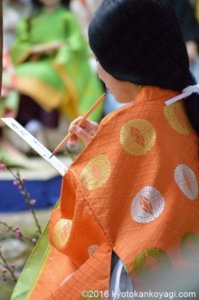 They have Sakazuki in front of them and drink Sake. After that, they compose poem.

The report of 2022 on Kawazu Zakura, the earliest bloom Sakura in Kyoto. We can find some of them in Ichijo Modori bashi bridge, Toji, Unryuin, and Philosopher's path.They go into full bloom around mid-March.
2022.02.03

Reiwa (令和), what does the new Imperial period/era mean? Why are Japanese people delighted because it was quoted the Manyosyu?
2019.04.01

Kiyomizudera consists of about 15 buildings and some of them were renovated in the name of "Heisei no Daikaisyu 2008-2020(Reconstruction in Heisei period). "
2019.03.06

So far, Japan keeps low death toll in comparison to other nations. Some say that one of the reasons is Japanese people love to be clean. I'll analyse the reason why in terms of the cultural inheritence.
2020.04.14
スポンサーリンク
賀茂曲水の宴2022開催予定＠上賀茂神社：みどころや料金など
斎王代御禊の儀2022は中止：上賀茂神社と下鴨神社で隔年開催
スポンサーリンク