What is Aoi matsuri festival? 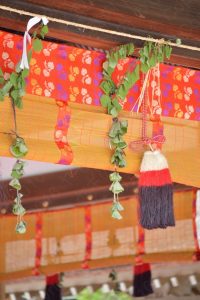 These shrines hold Aoi matsuri festival on the second “bird day (We put Chinese zodiac signs like bird, tiger, and other animals on the days in calendar.)” on May of ancient Japanese lunar calendar. In the present day, they hold it on 15th on May. 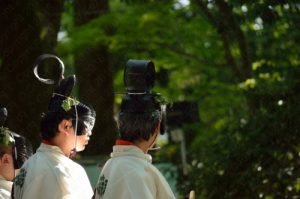 The history of Aoi matsuri festival

The history of Aoi matsuri dates back to 6th century. In the era of emperor Kinnmei, there were many natural disasters and droughts. The emperor asked a fortune-teller about the cause. (Japanese emperor is the highest ranked priest in Shinto, the religion which has gratitude for the nature that gives us harvest. So, if anything wrong about the nature occurred, he is responsible for it.) The fortune-teller told him the cause of the natural disasters and droughts. It was a curse of Kami (Shinto Deity ) of Kamo. The emperor asked him to hold a ritual to ease the Kami of Kamo. This is the begging of Aoi matsuri feitival (Kamo sai).

In Heian period (794-1185), Kamo sai was held as one of the most important matsuri (festival) on the ancient Japanese law.

In Muromachi period (1336–1573), aristocrats was losing their power and influences and Kamo sai was on the decline. After “Onin no ran”, the largest-scale civil war in ancient time of Japan, Kamo sai ceased to exist. In Edo period(1603–1868), the matsuri (festival) was held again but stopped again in Meiji period(1868–1912). In the short time in Meiji and Showa period(1926–1989), the matsuri (festival) was held but stopped again during the WWll. In the end, the festival restored in 1953. 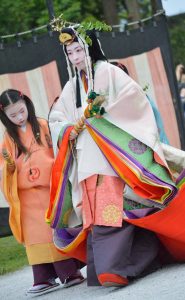 Saioh dai is a most famous lady in Aoi matsuri festival (The lady in the picture above.). The word “dai” means a substitute for someone/something in Japanese. So let me tell you about “Saioh”.

Saioh is a Shinto priestess works as a deputy of the emperor. In the Heian period, when the new emperor was enthroned, a fortune-teller chose Saiou among unmarried ladies in the imperial family on a special fortune-telling.

Once a lady was elected as Saioh, she moved to a small palace called “Hatsu sai in” to purify herself for three years. After the purification of three years, she moved to a small palace temporary built for Saiou called “Nomiya” and purified herself at the river Kamo. After these purification, she was in a state to serve as a deputy of the emperor. 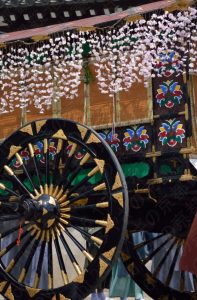 If you were interested in Japanese culture or literature, you might know The Tale of Genjiwritten by Murasaki Shikibu. In the chapter ‘Aoi’, you can find a incident called “Kuruma arasoi”. That is a small conflict took place at Aoi matsuri festival.

Saiou became extinct in Kamakura period (1185–1333) and was restored as “Saiou-dai” We call her “Saiou-dai” i.e. the substitute for Saiou because she was not erected among the members of the royal family nor is Shinto priestess.

Genkoan temple in Kyoto is a cozy place but has extraordinary autumn leaves, Zen windows and Harekiri-ceilings. Let me show you them!
2018.10.20

Nara has a huge statue of Buddha, a.k.a., Daibutsu, Birushanabutsu and the Great Buddha. In this article, you can learn anything about it; Its features, when and why it was built and the way to construct it.
2020.01.26

Eikando/Zenrinji is the best autumn leaves and night illumination spot in Kyoto. The way to enjoy them, open hours, entrance fee, access are also available!
2018.10.08

Let us learn the way to feed Sika deer with Sika Senbe crackers in a video with precise information. You also learn why lots of Sika is in Nara park.
2019.12.02
スポンサーリンク
The best time and top 5 spots for autumn leaves in Kyoto!【Forecast2018】
Gion matsuri festival in Kyoto 2022: Let us enjoy Mikoshis, Yamahoko floats, and Yoiyamas!!! 祇園祭2022英語で説明
スポンサーリンク