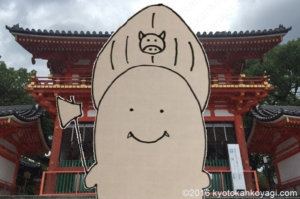 In Japan, Shito and Buddhism had been fused for centuries. Yasaka shrine used to be a Buddhist temple called Gion sha, which enshrined Gozu Tenno. He is a Ekishin (疫神)Deity who saves us from epidemics. He was one of the most popular Deities in our country.

In the fusion, Shinto Deities and Buddhist ones were understood as the same one. Gozu Tenno was considered as the same Deity as Susanoo no Mikoto.

In 1868, as a part of Meiji restoration, the government separated Shinto from Buddhism and Gion sha decided to become Yasaka shrine and erased the name of Gozu Tenno.

Today, many people forgot his name but he is still alive as Susanoo no Mikoto.

When we talk about Gozu Tenno, we usually cite Bingo no Kuni Fudoki(『備後国風土記』), It is a geographical booklet compiled in the 8th century and describes Gozu Tenno enshrined in Ekikumasha.

In this article, I’ll show you who he is on Sangoku Souden Inyoh Kankatsu Hokinaiden Kin Ugyokuto Shu(『三国相伝陰陽輨轄簠簋内伝金烏玉兎集』) because it was written by a priest of Gion sha, and it describes the temple precisely. I referred to Bingo no Kuni Fudoki as supplemental source.

Onmyodo is still alive today though people forgot its name. See the video below. It was a ritual held on the new year’s eve at Shinsenen temple, where Gion matsrui festival started. Monks turn the small shrine to the direction in which Toshitokujin, the Deity who rules directions, stays.

“Gozu Tenno used to be a king of Magada, Shokitei, and Tengyosei. He descended to the world and was called Gozu Tenno.”

It also tells us how he looked like: “He wears a musk of yellow ox, has pointed horns. He looks terrible.”

Due to his appearance, he didn’t have a spouse. He headed for Shakara palace to marry Hari Sainyo, his wife to be.

On his odyssey, he asked Kotan Shorai a warm meal and bed. Kotan turned him down though he was rich. On the other hand, Somin Shorai, a brother of Kotan’s. Somin welcomed him though he was poor.

After that, Gozu Tenno reached Shakara palace and married Hari Sainyo. On the way back home, he exterminated Kotan’s family except Somin.

He said to Somin: “I will come back here as Ekishin in future but you and your descendants are exemptions.”

I’ll show you what Ekishin is later.

Gozu Tenno is also known as Muto Tenjin. When Gozu Tenno met Somin again, he revealed who he was. He said, “I’m Haya Susanoo no Mikoto.”

Gozu Tenno is equivalent to Susanoo no Mikoto

Depending on these stories, Gozu Tenno and Susanoo no Mikoto is considered the same Deity in the fusion of Shinto and Buddhism.

We can’t tell when Gion sha enshrined Gozu Tenno. Yasaka Shrine says it did it in the 7th century.

Niju Nisha Chushiki,a complementary book of the list of 22 shrines the Imperial court compiled describes that Gion sha enshrines “Tenjin.” Some say the word means Muto Tenjin in Bingo no Kuni Fudoki but is is controversy because we have many “Tenjin,”  For example, we call the Deity of Kitano Tenmangu shrine “Tenjin san” in a colloquial way even today.

The most reliable source is a history book called Honcho Seiki compiled in the 12th century. It says that Gion sha was caught by fire in 1070 and the foot of (the statue of) Gozu Tenno was collapsed.  It proves that Gion sha enshrined Gozu Tenno at least in the 11th century.

Gion sha had a golden statue of Gozu Tenno or Susanoo no mikoto. One day, a monk sold it. He was thrown in to the Yodo river alive.

Goshintai of Susanoo no mikoto which Kuze Komagata Chigo wears in Gion matusri also was pawned.

Ekishin is a Deity who brings people epidemics. Ancient people believed that Ekishin or phantoms of ousted persons came to places they lived out of nowhere and caused epidemics. Gozu Tenno was the most infamous Ekishin.

In Bingo no Kuni Fudoki, he asked Somin and his descendants to wear Chinowa.

Take a look at the piece of paper on Chinowa amulet in the photo. It reads, “我蘇民将来子孫也（I’m a descendant of Somin Shorai.) .”

Gion Matsuri started on this story. Ekishin is a Deity who bring people epidemics. People thought they can put down it when they take him away. This is the aim of early Gion masturi.

Chinowa amulet we can have in Gion matsuri festival and Chinowa Kuguri are also based on this story.

As time went by, people started to welcome Ekishin on the other hand. I can’t tell why the exchange of roles happened. I suppose people thought Ekishin could help them with his extraordinary power if they adored him. 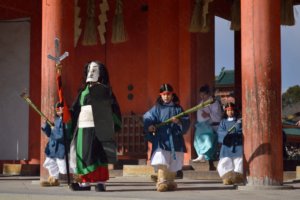 This kind of exchange is not strange for us. For example, Hososhi in Tsuina ritual used to be get rid of devil. As time went by, he was considered as devil because of his scary appearence.

As shown in the last chapter, Gozu Tenno saves us from epidemics.

The last year, we are in the fear of COVID-19. In Kyoto, lots of events were canceled.

In such a situation, Gion matsuri was held in the abbrieviated way. Mikoshi and Yamahoko parade were can cenceled but the Deities of Yasaka shrine stayed in Otabisho in the downtown to be with us for a week for the purpose of saving us form the epidemic.

It sounds strange but that is the aim of Gion matsuri practiced every summer for over 1100 years. Enjoy the videos below, BAAH!!!

The next page is amulets

Jidai matsuri festival takes place for the first time in 3 years. Enjoy the various historical figures in the parade.
2018.09.11

To our regret, some behavior seems rude in Japan. I suppose the problem is that they are stranger to our culture. So, I'll show you indications that will be great help for you.
2019.06.25
スポンサーリンク
牛頭天王と八坂神社と祇園祭2022：疫病退散とコロナのご利益
What’s goin on in Kyoto? In January, 2021 With COVID-19
スポンサーリンク