The short history of Kamigamo shrine 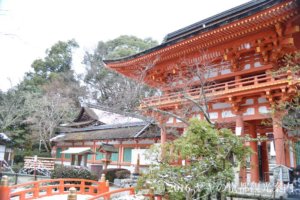 “Kamigamo shrine” is a de facto name of “Kamo wake ikazuchi shrine”. It enshrines “Kamo-wake ikazuchi no kami”, the deity of vigorous thunder.

“Kamo” means the Kamo clan which inhabited around the northern part of ancient Kyoto.

“Ikazuchi” has the same meaning as “Kaminari”. We can devide the word into two words. “kami” and “nari”. “Kami” means deity and “nari” means “sound”. The origin of the word “kaminari” is “Sound made by deity”. So, we adored thunder with awe. in the ancient times. 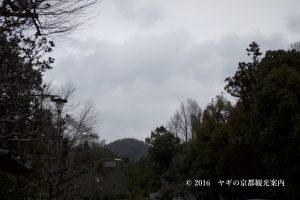 The official history of Kamigamo shrine indicates the deity descended on the mt. Koyama.

On the other hand, Yamashiro no kuni Fudoki (the report of ancient Kyoto province),indicates that: Tamayoribime found an arrow and brought back it to home. She put it on her bedroom and it made her pregnant.

In 709 A.C., the capital moved to Kyoto from Nara. After the transfer of the capital, Kamigamo shrine was enlisted in “Nijyu-nisya (22 shrines) ” which protects the capital. When our country was in a critical condition, like huge expansion of epidemic,  Nijyu-nisya shrines received dedication of the Imperial court. Niju-nisya desereved this highest honor.

Around the late 15th century, the dedication ceased because the largest civil war in the Medieval ages in Japan took place and the Imperial court was on decline politically and financially.

Sometimes the Imperial court tried to resume the dedication only to fail. 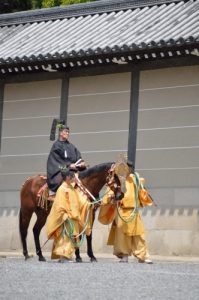 In the 19th century, Kamogamo shrine was enlisted as one of three “Chokusai-sya”. Chokusai-sya is a shrine which deserves a visit of a messenger of the emperor. Kamigamo shrine still is in Chokusai-sya. At Aoi matsuri festival, the emperor send his messenger.

Today, Kamigamo shrine has 2 National Treasures of Japan and is listed as the world Heritage site.

The crest of Kamogamo shrine 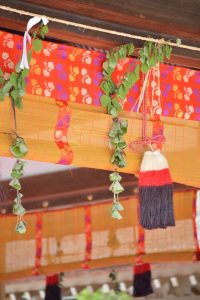 The crest of Kamigamo shrine is “Aoi (the leaves in the picture. The crests are embroidered in the red part of the wooden curtain behind the leaves. )”.  The word is devided into two words and  the words transformed “Ahu” and “Hi” each other in the old Japanese language. These words mean “We see Deity”. 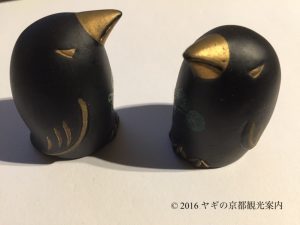 We often see a three-legged crow in Kamigamo shrine. The crow is called “Yatagarasu”. It guided the emperor Jimmu, the first emperor of Japan, through his Odyssey. It is believed that Yatagarasu is Kamo wake taketsunumi no mikoto, the founder of the Kamo clan. 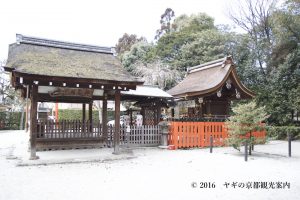 He is enshrined in Kuga shrine, the sub-shrine of Kamigamo shrine.

What to see in Kamigamo shrine? みどころ 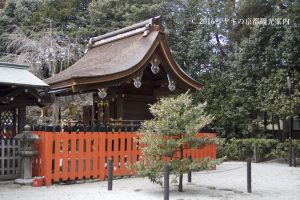 The main hall of Kamigamo  shrine is listed as National treasures of Japan because it has typical “Nagare-zukuri” construction. Take a look at the picture above. The front side of the roof of the shrine is longer than the back side of it. That is a “Nagare-zukuri”. (The shrine in the photo is not a main building of Kamigamo shrine.) 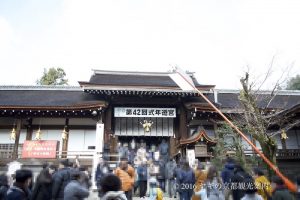 Though the main hall is National treasure, we can’t see it usually. Click the picture of Nakamon gate above.  You can see a banner kanjis and 42 are written. Under the banner, there is a gate and we can’t go beyond the gate except special occasion. 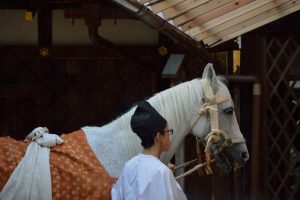 The picture and the video above tell you what is like inside of the Nakamon gate. The picture was taken in a ritual called “Hakuba sohran shinji”. In the ritual, we let the Deity see a horse. So, he stands in front of the main building. He sees ahead a small corridor, a place filled with white pebbles, and the main building. In the video, a priestess is on the corridor and let him eat soy beans.  If the emperor pays a visit to the shrine, he prays on the pebbles. He is the only person to be there.

In special occasion, we can be the same place where the horse stands in the picture. 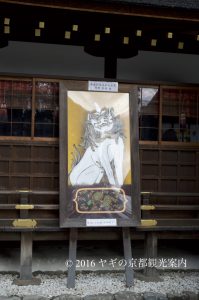 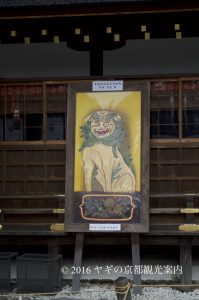 The main hall has a corridor around it and there is a pair of Komainu. (We cannot take picture of the main hall.) Kamainu is a guardian of shrine and temple.

The peculiar thing in Kamigamo shrine is that it has two-main halls. “Honden (main hall)” and “Gonden (sub-hall)”. Gonden is a substitute for Honden in case of emergency in which we cannot use Honden and “Shikinen-sengu”.

Shikinen-sengu is a reconstruction of a main hall of the Shinto shrine. Around 10 of 80,000 shrines carry it on. Kamigamo shrine practices it every 20 years. Originally, Shikinen sengu needs reconstruction of the building but that of Kamigamo shrine exercise only the reconstruction of the roof because we cannot make large modification of properties of Natonal treasure in terms of law. We have a good example. As I indicated in the article of Kinkakuji temple, the golden pavilion was  caught by fire to burnt out. When it happened, Kinkakuji was listed as National treasure. The government crossed Kinkakuji off the list of National Treasure for the purpose of reconstruction.

Generally speaking, Omuro Zakura of Ninnaji is the last-blooming Sakura in Kyoto. It is in full-bloom in mid-April usually but it might bloom about 2 weeks earlier. You can learn about the Sakura and the way to enjoy it in this article. Now we're in February. I'll start to update this article in April.
2020.03.12

Kodaiji enshrines Bodhisattva Kannon robot. She reveals what The Heart Sutra and the way to Nirvana. This article is a special report of her preaching ad Kodaiji temple and an easy intruduction of The Heart Sutra.
2019.04.08
スポンサーリンク
上賀茂神社の見どころを歴史的観点から詳細かつ簡潔に解説
Fushimi Inari Taisha: Hike trough thousands of Torii with Foxes
スポンサーリンク