In 2022, Gozan Okuribi is to took place in the usual way. 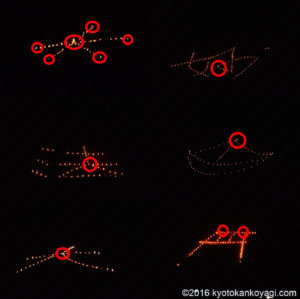 As Kyoto Gozan Okuribi Rengokai committee said, Gozan Okuribi was abbreviated due to COVID-19 in 2021: Only the bonfires indicated with red circle were lit. Kyoto has never seen Okuribi in this way for the first time.

We waved ourgoodbye to the deceased ancestors with abbreviated Okuribi. 合掌
スポンサーリンク

What is Gozan Okuribi? 五山の送り火とは？ 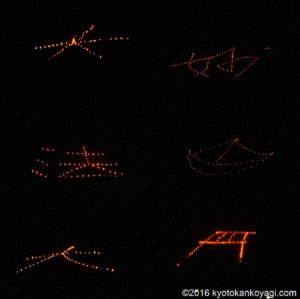 Gozan Okuribi/Gozan no Okuribi is a set of bonfires in 6 places on 16 August. At 20:00, Daimonji (大) was lit and we can see other bonfires are set fire in every 5 minutes.

It is the most famous annual event in late summer and is known as one of so-called “4 big Kyoto events” as long as Gion Matsuri, Aoi Matsuri, and Jidai Matsuri.

It is located on Mt. Nyoigatake. On its foot, there is Ginkakuji temple. We can climb this mountain only. (On 16th, we cannot enter the mountain by 14:00) 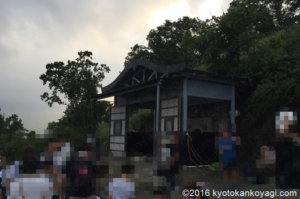 In the mountain, there is a small temple enshrines Kukai. 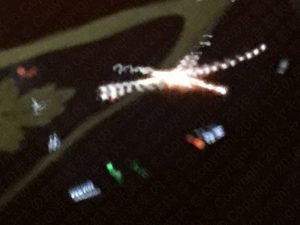 The reflection of Daimonji on Sake in Sakazuki cup. It is said that if we drank it, we would enjoy good health for a year.

And it is believed that the charcoal of Daimoji keeps away thief from us. 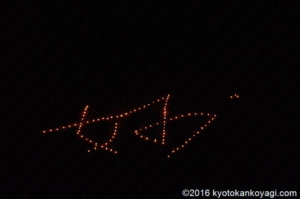 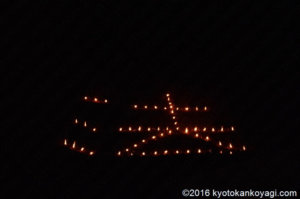 We locate Myo (the left one) is on Mt. Manroto and Ho (the right one) on Mt. Daikokuten. They started when villagers of Matsugasaki accepted Nichiren school of Buddhism. Myo and Ho stands for Myoho Rengekyo（The Lotus Sutra）.

When Myo is lit, monks read out the Sutra. On 15th and 16th, people enjoy Daimoku Odori and Sahi Odori dance at Yusenji temple. 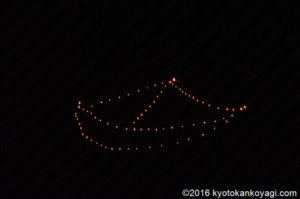 Located on Funayama. It stands for Shoraisen ship which our deceased ancestors are on. The bell of Saihoji temple tells the time to light the fire. 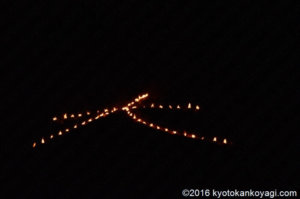 It is located on Mt. Daimojji near Kinkakuji temple. Monks make fire at Hoonji temple and people bring it to the mountain to light the bonfire. 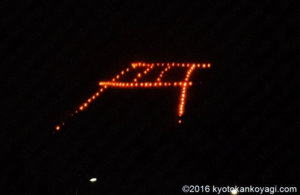 It is located in Mt. Mandara. Only Toriigata uses torches. So it looks brighter than othres.

Make sure it with the picture.

As I said before, we can climb only Nyoigatake. I’ll show you how Daimonji is lit. 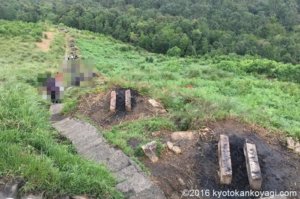 Each Okuribi consists of bonfires. These = and ＋ are called Hidoko. On Hidoko, pieces of wood are piled up and they were bunt with Gomagi. Gomagi is a small piece of wood on which we wright our hope.

Gozan Okuribi is a way of waving our good-bye to the deceased ancestors in Obon. We cannot tell when Gozan Okuribi began.

Its first appearance in history is in a private dairy called Keicho Nikken Roku『慶長日件録』in 1603. The Author says, “I went to the river bank to see bonfires in the mountains…”

Youshu Fusi『雍州府志』, a topography in 1682, introduce Gozan Okuribi to us as a part of Obon.

Obon is base on a story in The Yulanpen Sutra.It depicts: There was a Gautama Buddha’s disciple called Mokuren. He has a supernatural power to see. One day, he found his mother suffered in Gakido, the place like hell.

In Gakido, people suffer from thirst and hunger because evry drink and food turn to fire.

With his ability, Mokuren tried to send food to her mother in fail. He was at a loss and asked Gautama Buddha for advice. He said, “Now monks are under training. On the last day of the training, give them food. And your mother also enjoy the food.”

This story went into an event to worship ancestors known as Obon.

In Obon, we believe our deceased ancestors came back to us for a couple of days. Usual year, Obon starts on 13 August and ends 3 days later.

On 16 August, we wave our good-bye to the ancestors with bonfires. Most of bonfires are small ones. This bonfire is called Okuribi. To set Okuribi fire is one of the most emotional annual events we have.Gozan Okuribi is a huge one of the bonfires.

Then, when did Gozan Okuribi begin? で、いつから？

As described before, Gozan Okuribi began at least 17th century but no one can tell when it started exactly. There are many hypotheses and I’ll show you some of popular ones.

In the 15th century

Ashikaga Yoshimasa, the 8th Shogun of Ashikaga Shogunate, started Okuribi to mourn for his deceased son.

Anaisya, a guide book of Kyoto written in 17th century, describes, “Daimonji is made on the Konoe Nobuchika’s hand….”

As a Vajrayana ritual 密教儀式説

This is not a famous hypotheses. It goes with this year.

Some says that Kukai started Gozan Okuribi as a ritual to calm epidemics down.

He considered the Imperial palace as the altar, Daimojji and Hidari Daimonji as Mandala, Myoho as the Deity,  and Funagata and Toriigata as gardians.

At Toji temple, he held a ritual with them.

Arashiyama Hanatoro is held in Arashiyama district in mid-November. We can enjoy lots of night illumination and other events. This article shows you the best way to enjoy them.
2019.09.26

Hatsumode in Kyoto 2023: Yasaka shrine provides you with extreme blessings!

Yasaka shrine Hatsumode 2023 guide: Let us make Hatsumode (初詣) to Yasaka shrine (八坂神社) which which gives you an extraordinary blessings to you.
2018.12.13
スポンサーリンク
五山の送り火2022：歴史や由来と盂蘭盆会と各山の解説
金閣寺の改修工事2020は終了。12月19日現在の様子【いつからいつまで？】
スポンサーリンク