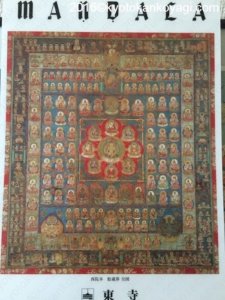 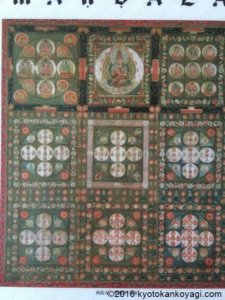 Mandala is a picture. Its configurations of images and letters show us the teaching of Vajrayana Buddhism.

The word “Mandala” divided into two words; “Manda” and “la.”

So, Mandara stands for “The thing which has the essence ( of Vajrayana Buddhism).”

There are many kind of Mandala in this world.

In Japan, in terms of metaphor, we have three kinds of Mandala; Dai-Mandala, Hoh-Mandala, and Sanya-Mandala.

Kukai, the founder of Shingon Buddhism and one of the most famous monk in Japan, brought all of them to Japan from China in the 9th century.

On the other hand, in terms of structure, we also have three kinds of Mandala; Picuture-Mandala, Sand-Mandala, and 3D-Mandala.

Dai-Mandala is the most popular Mandala in Japan. It has many images of Deities.

Hoh-Mandala doesn’t have images. It has Siddham scripts instead.

Sanmaya-Mandala doesn’t have images nor scripts. It has Mudora instead. Mudora is a Sanskrit word. It tells us what each Deity is. In Japanese, it is translated as “Inso.” The word means a gesture of hand(s) or things which a Deity has. 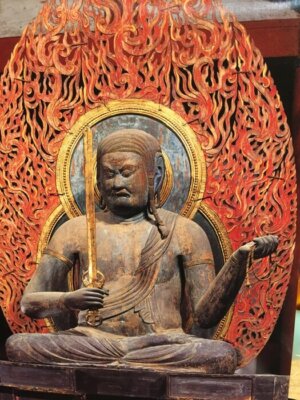 Taizokai-Mandala represents The Mahavairocana Tantra,the most important text in Vajrayana Buddhism. It shows us the way the truth of Buddhism spreads all over the world. It has 415 images/scripts/Mudora of Deities.

Kongokai-Mandala representsThe Vajrasekhara Sutra,an important text in Vajrayana Buddhism. It shows us the way the wisdom leads us to the truth of Buddhism. It has 1462 images/scripts/Mudora of Deities.

Picture-Mandala is a Mandala painted on paper, cloth, and so on.

San-Mandala is constructed on Sand.

3D-Mandala/Katsuma-Mandala consists of statues of Deities. Toji temple has this kind of Mandala. It has twenty one statues and divided into four parts; Nyorai-bu, Bosatsu-bu, Myo-oh-bu, and Ten-bu.

The Mandala was constructed in the 9th century and caught by fire in 1486 and some of them are burnt out.

The 3D-Mandala is located in Kodo-hall in Toji temple. The hall had not been open to public for nearly a thousand year. In 1965, it opened the door to us for the first time in its history. 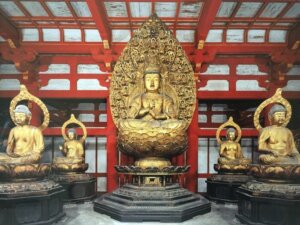 These Deities called “Nyorai” in Japanese. The word means the truth of Buddhism. They reached the truth and have no need to dress themselves up. So, they wear only sheets of cloth. 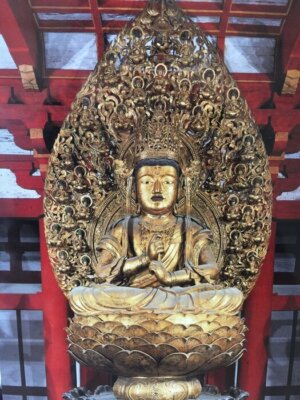 In Vajrayana Buddhism, Vairocana represents the truth or the whole universe. It has Inso gesture called “Chikenin.” It tells us that the statue stands for a Vairocana of Kongokai-Mandala.

Amitabha means eternal life or limitless light in Sanskrit. It rules the eastern paradise in Buddhism. If we confess “Namu Amidabutsu (I believe in Amitabha),” it leads us to the paradise. 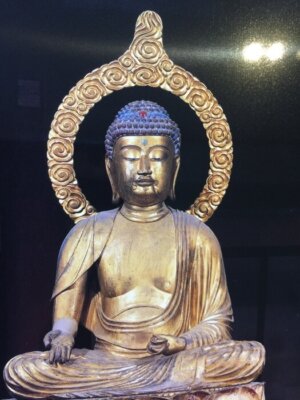 Ratnasambhava means that the one born of treasure. In “Byodo Shochi,” it treats anyone and anything equal. 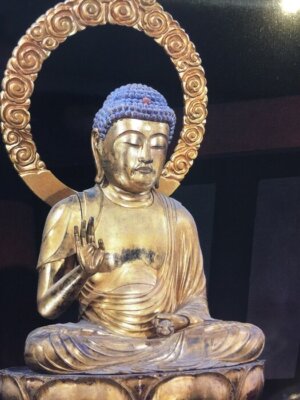 Amoghasiddhi is in the fulfilled state of mind called “Joso Sachi.” 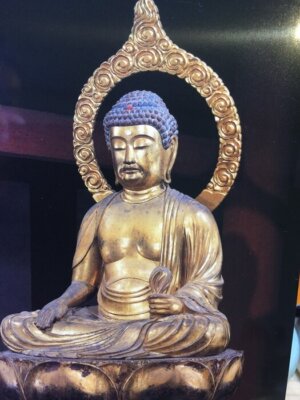 Akshobhya is equal to the pure and clear mind of Dainichi-Nyorai.

Now the state of emergency was lifted in Japan but the fear of COVID-19 still exists. In this article, I'll show you places to visit for enjoying Goriyaku (Good fortune), Aomomoji, and other things in Kyoto keeping social distance.
2020.05.26
スポンサーリンク
京都の紅葉2022年：人が少ないおすすめ日帰りモデルコース：実相院→蓮華寺→三千院→実光院→宝泉院
京都の紅葉2022年：おすすめ早朝モデルコース清水寺→金閣寺→永観堂→南禅寺→天授庵→清水寺ライトアップ
スポンサーリンク