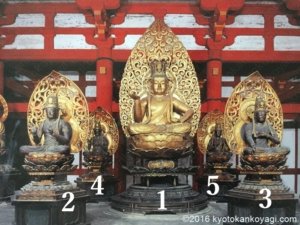 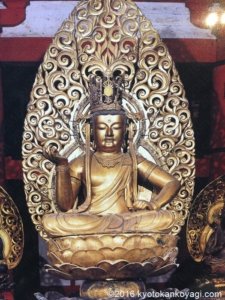 It leads people to Buddhism with his wisdom.

The statue is absent because it is under restoration. 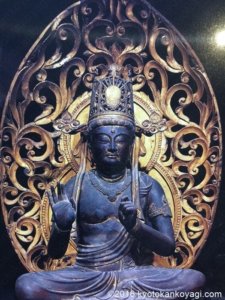 It leads people who lost their way to the enlightenment. 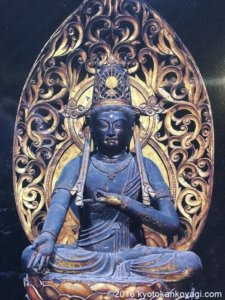 It is Hojo-Nyorai in the form of Bosatsu. He brings people happiness. 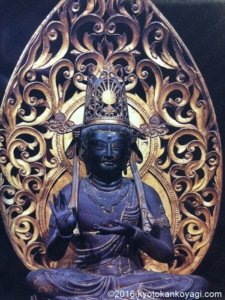 It saves people who lost their way. 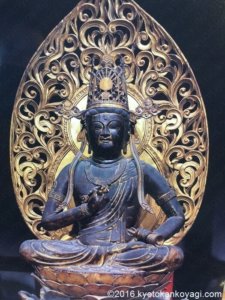 It save people who suffers from “Bonnoh.” Bonnoh means unfavorable desire which prevent people from enlightenment. 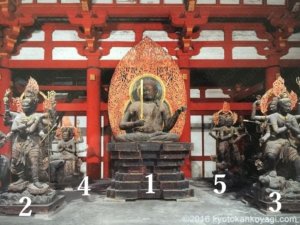 These Deities called “Myo-Oh” in Japanese. They are Deiteis only found in Vajrayana Buddhism. They are Nyorai in the form called Myo-Oh and save people form Bonnoh to leads to the enlightenment. 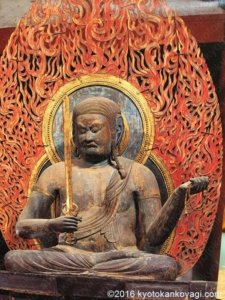 It is equal to Dainichi-Nyorai. It facial expression stands for its strong will to save people. The fire behind it is called “Karuraen.” It means a Deity called “Karuraten” which devour Bonnoh. 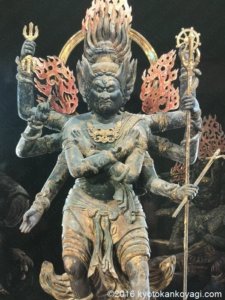 It is equal to Hojoy-Nyorai. It saves people with its eight hands. It is a savior of the south. 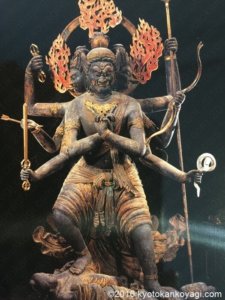 It is equal to Asuku-Nyorai. It extreminates Bonnno in the past, the present, and the future. It is a savior of the east. 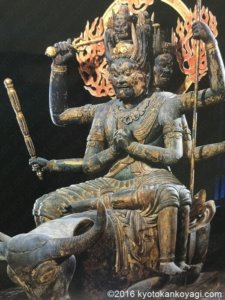 It is equal to Amida-Nyorai/Monju-Bosatsu. It saves people on the ox and a savior of the west. 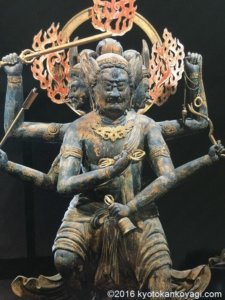 It is eaual to Fuku-Jyoju-Nyorai. It devours anythign evil and a savior of the north. 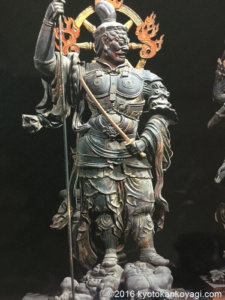 It saves the souther part of the hall. 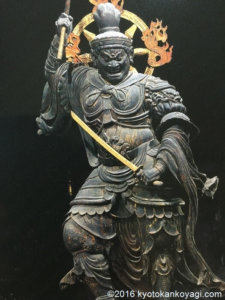 It saves the eastern part of the hall. 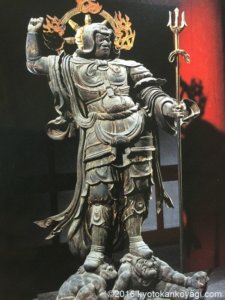 It saves the western part of the hall. 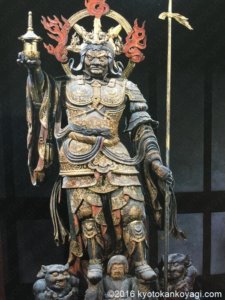 Tamon-ten is also known as Bisyamon-Ten. Many Samurai warriors believed in it because it is the Deity of victory. It saves the northern part of the hall. 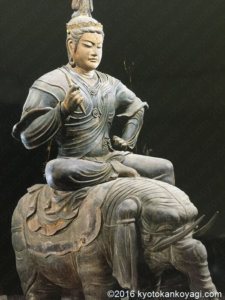 It is the Deity who saved Gautama Buddha. 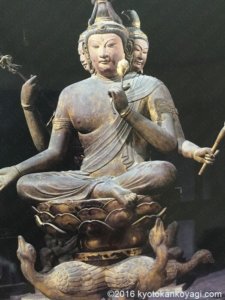 When Gautama Buddha was enlightened, with Taishaku-Ten, it asked him to tell his teaching to people.

How to get to Toji temple? 東寺へのアクセス

Toshiya, the traditional Japanese archery at Sanjusangendo in 2021 canceled due to COVID-19 三十三間堂の通し矢を英語で解説

The archery competition of Sanjusangendo is called "Toshiya."The competition of 2021 canceled due to COVID-19. Enjoy the archers in beautiful Kimono and its 600 years of history!
2020.01.11

Hakuba Soran Shinji is a Shinto ritual held at Kamigamo Jinja shrine in Kyoto on January 7th. In the ritual, we see Shinme horse and eat Nanakusagayu. In this article, you see the best way to enjoy them! Nanakusa gayu bowl is not offered in 2021 due to COVID-19
2019.01.04

Saiohdai Gyokei no Gi 2020 CANCELED: The most famous ritual prior to Aoi matsuri festival in Kyoto

Saiohdai Gyokei no Gi is the most important ritual prior to Aoi matsuri festival. In this article, we learn about Gyokei no Gi in historical point of view and who is Saioh/Saiohdai.
2019.04.30

橿原神宮紀元祭2021と神武天皇と日本のはじまり：皇紀2681年はコロナで中止
What’s goin on in Kyoto? In January, 2021 With COVID-19
Gozu Tenno and Yasaka shrine: He is still alive in the fear of COVID-19 牛頭天王英語で説明
牛頭天王と八坂神社：疫病退散とコロナのご利益
Yasaka shrine is to be designated as a National Treasure