We have a list of important Zen temples called Gozan. Gozan means “Five temples.” They are Tenryuji, Syokokuji, Kenninji, Todukuji, and Manjuji. In this hypotheses, the five groupings represents each of them. 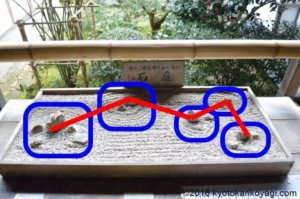 These believes were introduced Japan around 6th century.

Furthermore, Polaris was called Tenoh Daitei (天皇大帝). It is believed that the word 天皇 of 天皇大帝 is one of important origin of “Ten no(天皇) ” which means emperor in Japanese. 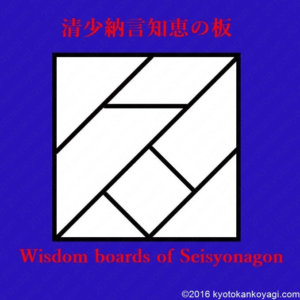 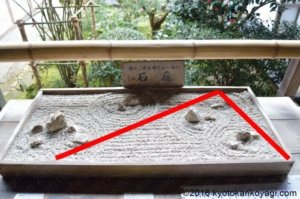 Boards of Seisyonagon is a transformation puzzle invented in the 18th century. It resembles Tangram in China. It bears a name of Seishonagon, the famous poet and author of The Pillow Book,though it has nothing to do with her. This hypothesis claims that the garden reminds us of the boards. 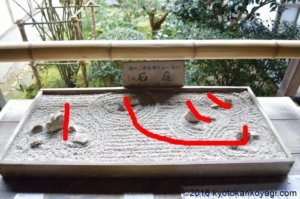 Seeing the groupings of rocks as a Kanji letter “心”. The Kanji means “heart” or “mind”. Zen is a kind of philosophy on state of mind.

David and Michiko Young, The Art of the Japanese Garden, TUTTLE publishing, 2005

The report of 2022 on Kawazu Zakura, the earliest bloom Sakura in Kyoto. We can find some of them in Ichijo Modori bashi bridge, Toji, Unryuin, and Philosopher's path.They go into full bloom around mid-March.
2022.02.03

In this post, I'll show you what is going on here in Kyoto. The original one, written in Japanese, is posted in last March. Since then, I have revised it for nearly a year. It is a long article and I can't translate it right now. So, I will do that in anti-chronicle order gradually.
2021.01.17