Who is Bodhisattva Kannon robot アンドロイド観音マインダーとは？ 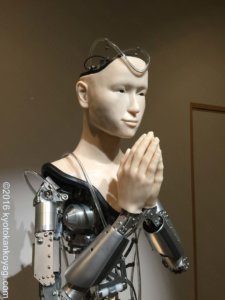 Kannnon is a Buddhist Deity who save people in suffer. The chief monk of Kodaiji temple asked prof. Hiroshi Ishiguro, the director of the Intelligent Robotics Laboratory at Osaka univercity, to develop a robot Bodhisattva for the purpose of relieving people in agony. 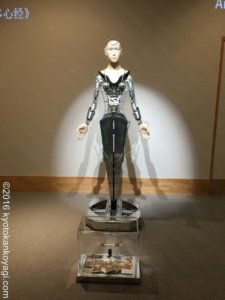 She tries to save us through The Heart Sutra. She can move her arms, body, and face. We can see her facial expression. She even moves her eyelids.

Kodaiji temple in Kyoto enshrines her. At Kyoka hall of Kodaiji, we hear her teaching for an hour. On the wall of it, a projection mapping are cast and she tells us about the meaning of The Heart Sutra. It is not allowed to take photo or shoot video, but we take photo before her teaching started.

If you were interested in it, visit the official site of Kodaji temple and make reservation (Japanese language only).

Shino. The price depends on us. In front of her, there is a box. We put a fee we decided to it. 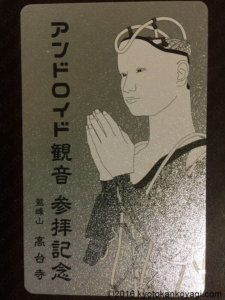 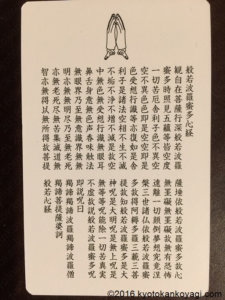 At the entrance, we have a card amulet which The Heart Sutra was written on .

Who is Bodhisattva Kannon 観音とは？ 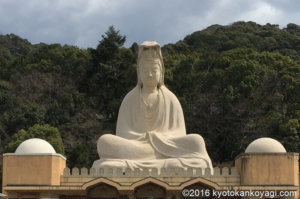 Kannon (観音) is one of the most popular Buddhist Deity in Japan. She is called as Kanzeon Bosatsu (観世音菩薩), or Kanjizai Bosatsu (観自在菩薩). We call her Kannon-san, or Kannon-sama in abbreviated form. Buddhist Deity usually have five kinds; Nyorai, Bosatsu, Myooh, Tenbu, and others.

Kannon belongs to Bosatsu. Bosatsu is the abbreviated form of Bodai Satta (菩提薩埵), which means “a person who seeks the enlightment.” It appearance is based on that of Siddhartha Gautama. He was a clown prince of the Shakya. So, Bosatsu is also on ornaments.

Kannon can appear in a way called “Fumon Jigen (普門示現).” The Kannon Sutra tells she appears in 33 forms. For example, Kiyomizudera temple enshrines Kannon. It is believed she goes to falls there to drink water as a dragon. In this Fumon Jigen, it is not surprising or strange she shows herself as a robot.

kyotokankoyagi.com
Kiyomizu-dera renovation finished in 2020
Kiyomizudera consists of about 15 buildings and some of them were renovated in the name of "Heisei no Daikaisyu 2008-2020(Reconstruction in Heisei period). "

The Hart Sutrais called “Busetsu Maka Hannya Haramitsu Tashingyo,” or “Hannya Shingyo” as abbreviated. The original text was written in Sanskrit. Sanzo Hoshi, a famous monk in the Tand dynasty of ancient China translated it in Chinese. In Japnan, we read the Chinese text as Kanbun. Kanbun is a technique to read ancient Chinese language in Japanese.

In The Hart Sutra,262 Kainji tells us the most important teaching of The Prajnaparamita Sutra.

The ancient Chinese text of The Heart Sutra 原文

The meaning of The Heart Sutra

Buddha tells his pupil about the story of Kannon’s enlightenment.

I trans late it to understand with ease.

We are going to Nirvana with Buddhism.

When Kannon was on the verge of enlightenment, she found Goun (五蘊. I’ll show you what it is in the next sentence.) doesn’t have substance to conquer any sufferings.

Sharishi (the name of pupil), Goun, i.e., mateiral, to feel, to remember, our will, our recognition, is vacant.

Sharish, nothing is born or ceased to exist. Nothing is clean or dirty, nothing is gained or lost. Anything has substance.

So, there is no Goun, We don’t have organ to recognize something and nothing is recognized.

We don’t recognize anything with our organ. So to say, we don’t have a cause of suffering.

So, there is no suffer, cause of suffer, happiness, and the way to be happy. We don’t have wisdom.

In this idea, we cannot have anything. Bosatsu, a person seek to be in Nirvana, don’t have widom. On the other hand, they is in the Wisdom to Nirvana: They don’t have anything prevent them from Nirvana.

In a nutshell, if we know nothing has substance, (in that state of mind) we understand everything and are in Nirvana.

In past, present and future, all Buddha (Buddha means “a person in enlightenment in Sanskrit.) was, is, and will be in this state of mind.

This idea is the greatest and the only way to conquer suffer.

She tells us the most important idea of The Heart Sutra: Nothng has substance or anything is vacant. If nothing has any substance, we are also has no substance. Our subjective point of view makes what we think ourselves are. If we couldn’t have “ourselves,” we also wouldn’t have “others.” So, we are equal.

I found it was interesting because I don’t think equality in that way. I’m sure we are born equal. Ablsolutely. On the other hand, in Buddhism, we are equal in the way she tells. Very interesting idea. 合掌。

How to get to Kodaiji temple?

Kodaiji is the red alien!

How can we tell apart Hoko, Yama and Yatai in the Yamahoko parade of Gion Matsuri festival?

In Yamahoko parade of Gion Matsuri festival, we can find 35 Yamahoko floats. We have three kinds of them: Hoko, Yama, and Yatai. In this article, I'll show you the way to tell apart them easily.
2021.04.08