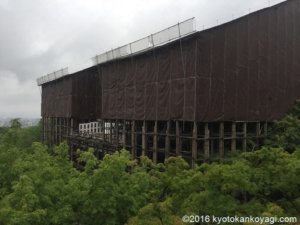 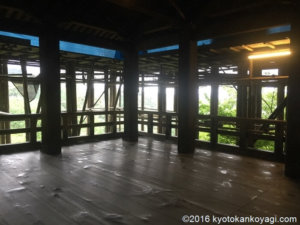 Kiyomizu-dera temple is one of the most popular destination for tourists in Kyoto. It consists of about 15 buildings and some of them were renovated/reconstructed in the name of “Heisei no Daikaisyu (Reconstruction in Heisei period) ” started in 2008.

During the renovation, Akihoto, the former emperor, gave up his throne to his son on 31 April 2019. On the very next day, his son Naruthito acceded to the Chrysanthemum Throne and the new Imperial era Reiwa started. So, the reconstruction is “Heisei and Reiwa no Daikaisyu” actually.

In  March 2020, the scaffolds covered the main hall was taken away and we can see it with full view for the first time in 3 years.

In May, the renovation of the floor of the stage was started and finished in December the 3rd, 2020.

Heisei and Reiwa no Daikaisyu renovation took 12 years and was finished in 2020.

Why did the renovation take place?

Since its foundation in the 8th century, Kiyomizudera was reconstructed in nearly every five decades because its wooden buildings were damaged by whether and the vivid colors of the pillars affected by sunlight. Other Japanese shrines and temples are to be renovated regularly due to the same reasons.

Most of all the buildings of Kiyomizu dera temple are renovated in the Daikaisyu but the most stunning incident is the replacement of the roof of the main hall. It is the last part of the Daikaksyu and finished in March 2020.

The renovation of the roof of the main hall began in 2017. It has been nearly five decades since the last one.

The renovation of the roof of the main hall 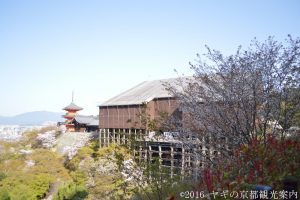 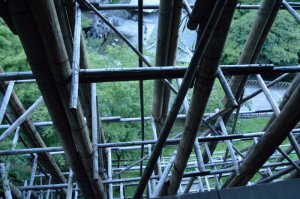 The main hall was in scaffolds named Suyane for the purpose of restoring of the roof. The roof of the main hall is built in a technique called Hiwadabuki. It is a popular art of roofing and we can see it in many Shinto shrines and Buddhist temples. These roofs are made of Hinoki (cypress) bark. Thin barks are put together and make thick roof.

How to make Hiwadabuki roof? 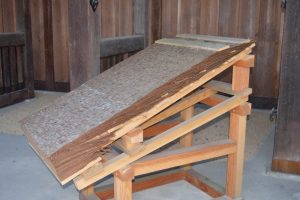 This is a model of Hiwadabuki roof.

Hinoki is a popular wood for house building. It contains oil. It protects roof form water and worm. In addition to it, the roof of Hiwadabuki is lighter than that of other materials. For example, about 1 sq yard of Hieadabuki roof is about 110 lbs and a roof of cray tile roof is heavier than 5 times.  It is so sturdy wood that even Japanese mythology prefers it. Horyuji temple in Nara is the oldest wooden building on the earth and was built in the 7th century with Hinoki.

Strip the bark of Hinoki cypress

Craftspersons named “Motokawashi” strip the bark of Hinoki. They choose at least over 70 years old Hinoki tree.  Near the root of a tree, they put a tool look like spatula between bark and trunk and peel off the bark. They take only the surface of the bark off to avoid devastate the life of the tree. The tree gains bark again and they can have bark about a decade later.

Attention: The photos in this chapter are not of Kiyomizudera temple. 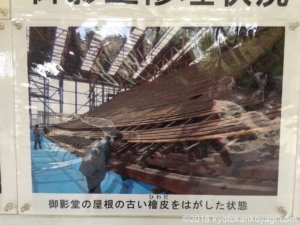 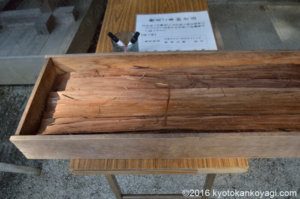 Barks are slivered in long trapezoid shape. They are called “Hiwada.” Craftsperson called “Hiwadabukishi” havs them moisten and put together to make a sheet of barks. 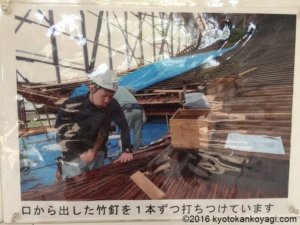 They put the sheet on the frame of the roof and nail them to it with bamboo nails in their mouth. When Hiawdabukishi nail a sheet to the roof, they shift it a little to build thick and large roof. 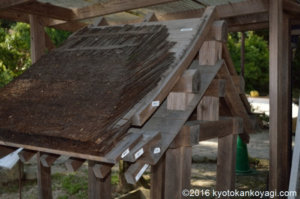 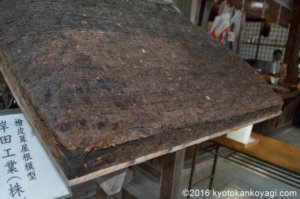 The layers of the sheet of Hiwada make strong roof. 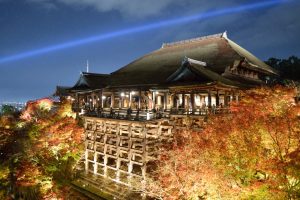 This is the main hall of Kiyomizudera temple before the Daikaisyu started. Take a look at something green on the roof. They are mosses. Hiwadabuki roof usually has mosses or plants (actually some have flowers!) on it. They bond sheets of Hieada strong and make them tough.

How is the renovation carried on?

The main hall is renovated in a huge cage covered with shading sheet. So, we cannot see what is going on inside. 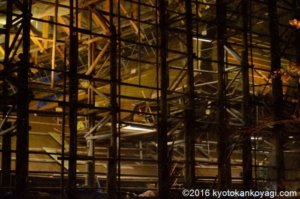 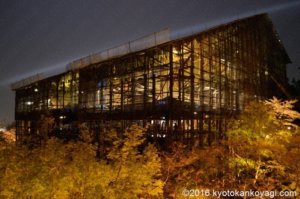 On the other hand, on night illumination, the main hall is illuminated in side of the cage. The renovation work is suspended at night but we can see how the reconstruction is carried on.

Kiyomizu-dera is one of the most popular destination to admire autumn leaves in Kyoto. Check the link below.

The renovation of the floor of the stage 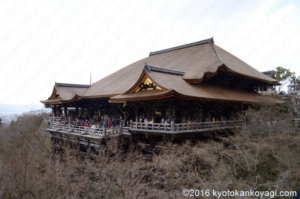 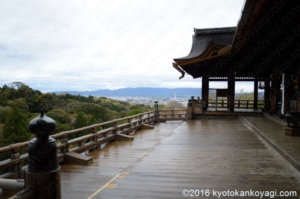 The stage consists of the 3 parts. They will be replaced with new ones.  The stage is about 2,045 sq. ft. and made of Cypress of Kiso and Tenyu. 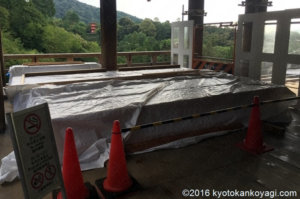 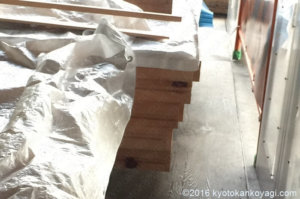 These thick boards made the stage. They are about 18 ft. in length and 2″ in thickness. 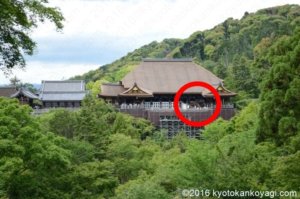 The renovation started in the right side of the stage. The red circle indicates the place we were able to visit. 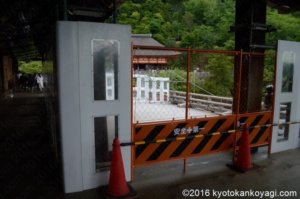 In the first place, the fence of the stage removed. 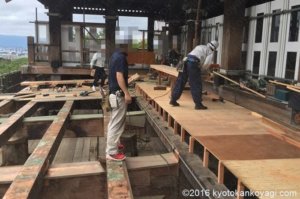 In the second place, the floor of it removed. Some lumbers were covered with copper plates for strength and anti-lusting. 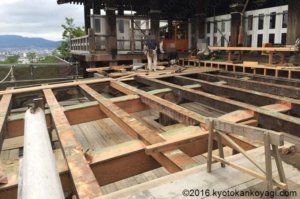 The copper plates were replaced. 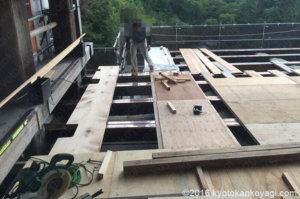 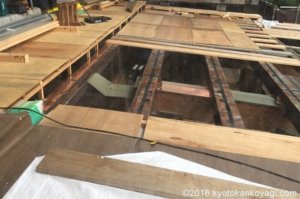 The carpenters put the boards on the lumbers and put the cypress boards over them.

This time, only the floor of the stage was replaced. The lower parts of it, like pillars, will be replaced some 400 years later.

Cypress lumbers lives about 2 times of their age. The pillars of the stage was constructed in 1633 with about 400 years-old cypress lumbers.

On 2000, cypress trees were planted preparing for the next renovation. On 2400, they will became 400 years-old and they will work as pillars for 800 years.

Genkoan temple in Kyoto is a cozy place but has extraordinary autumn leaves, Zen windows and Harekiri-ceilings. Let me show you them!
2018.10.20

Kitanozakura is the last-blooming Sakura in Kyoto. It is only found in Kitano Tenmangu shrine. Usually, it starts to bloom around April 15 and is in full bloom in around 20th.
2020.03.18

Arashiyama Hanatoro is held in Arashiyama district in mid-November. We can enjoy lots of night illumination and other events. This article shows you the best way to enjoy them.
2019.09.26
スポンサーリンク
Higashiyama Hanatoro ENDS in 2022: 東山花灯路英語で解説
清水寺の改修工事はいつまでか？2020年12月3日に終了。現在の舞台の様子
スポンサーリンク