The history of Kitamuki Ebisusya dates back to 1646.  We can easily find it in a famous guide book named Miyako Meisyo Zue published in 1780. Usually, Shinto shrine faces south or east but Kitamuki Ebisusya faces north. It is very rare case.

Yasaka shrine used to be a Buddhist temple called Gion Kanshinin/Gion sha under the fusion of Shinto and Buddhism. It enshrined Gozu tenno who rules Jetavana a.k.a. Gion in Japanese. The name of the temple was named after him.

Imamiya Ebisu shrine in Osaka is established by Ujiko, a family lives in an area near a Shinto shrine to worship it, which move there. Ebessan of Kitamuki Ebsisusha gave birth to one of the three great Ebisusha. (The others are: Kyoto Ebisusya located near Yasaka shrine and Nishinomiya srine.)

Gion Ebessan festival is held during Jan. 9th and 10th. Ebessan boat cruises on 9th and Hon Ebisu, a ritual at Kitamuki Ebisusha is 10th. 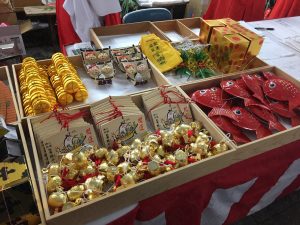 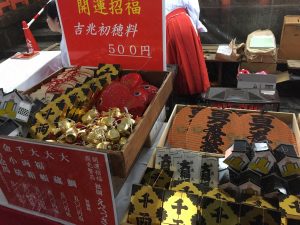 During the period, We make bamboo grass decorated with Engimono ornaments  like these. Bamboo is evergreen and believed that it gives us vitality to live.  And Ebessan has a fishing rod made of bamboo. Japanese people believes bamboo provides us prosperity and good fortune. These ornaments stand for good fortune: Koban, the ancient currency, Koban box, barrel of rice, warehouse to stock them. The red fish is red snapper. It is one of symbols of prosperity. (We’ll discuss them respectively later.) 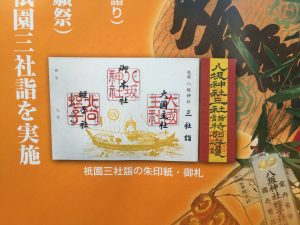 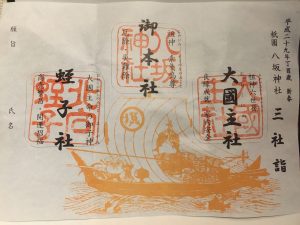 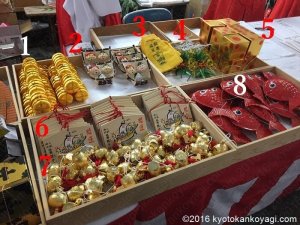 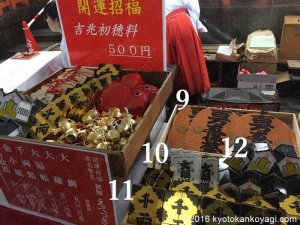 Each ornament has meaning.

Ebessan boat departs Yasaka shirne around 3 p.m. heading for Shijo Karasuma crossing. It turned around there and comes back to Yasaka shrine around 5 p.m. Fukumusume accompany it to bring Fukuzasa to stores located along the street. 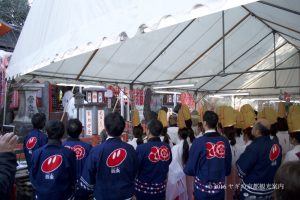 Before the departure, a ritual is held at Kitamuki Ebisusha. 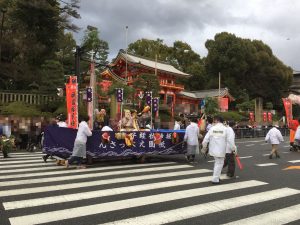 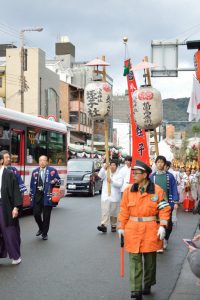 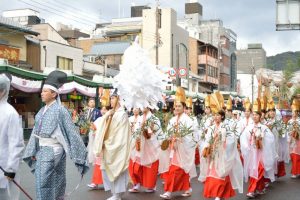 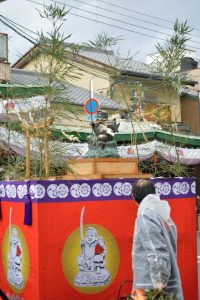 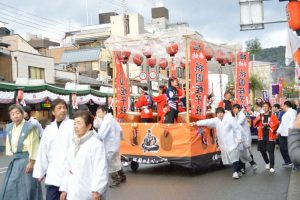 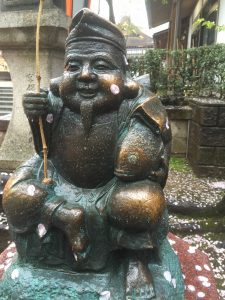 A statue of Ebessan is in front of Kitamuki Ebisusha usually but it attends the cruise on the day. 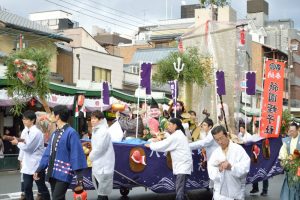 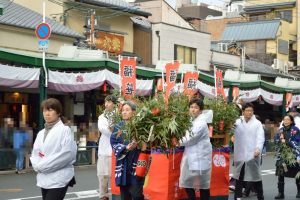 And the next, Ebessan boat. 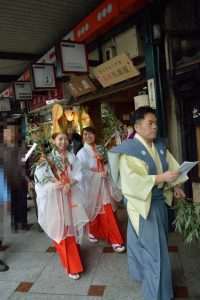 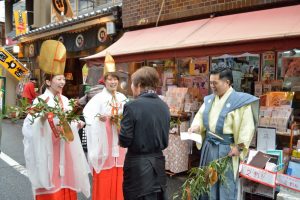 Fukumusume give bamboo grass to a shop owner. 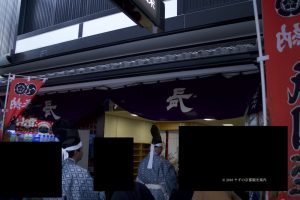 And some of them pay a visit to Kansya Densya shrine and Kaisyo of Naginata boko of Gion matsuri festival.

Kansya Densya enshrines Nigimitama (Good aspect) of Susanoo no Mikoto, the Deity worshiped in Yasaka shrine and Kaisyo of Naginata boko enshrines Aramitama (Rough aspect) of him because both of Nigimiatama and Aramitama make perfection. 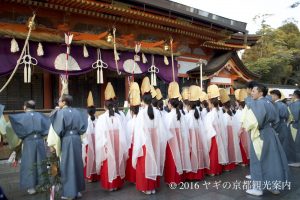 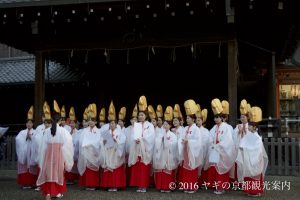 Around 5 p.m., they return to Yasaka shrine. 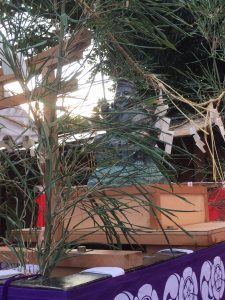 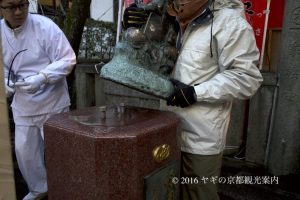 Ebessan and Seven Deities of fortune 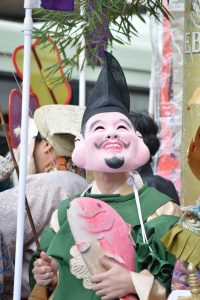 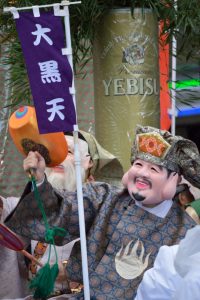 Daikoku ten is a Deity for food and fortune. He is a Buddhist Deity and considered as the same Deity as Ohkuninushi no Mikoto of Japanese mythology in the fusion of Shinto and Buddhism. 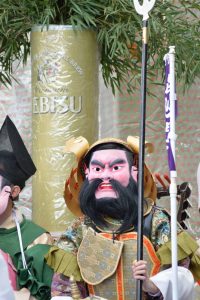 He is a Buddhist Deity and considered as the same Deity as Ebessan in the fusion of Shinto and Buddhism. He is worshiped as a Deity of war and Samurai warriors adored him in ancient times. 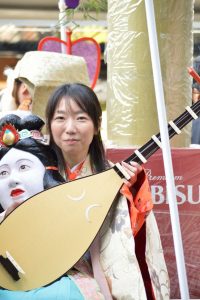 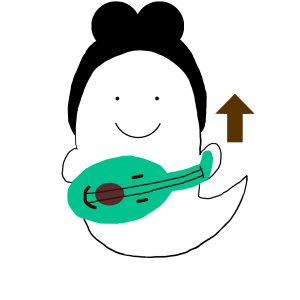 A Deity of the south pole in Taoism. He promises us long heatly life and birth of child. 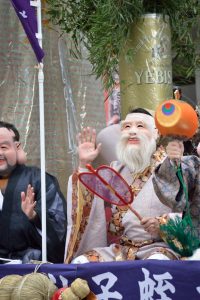 He also is a Deity of the south pole in Taoism. He promises us long life. 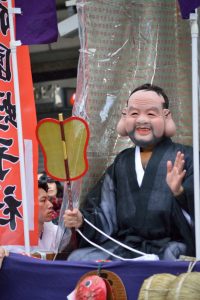 He is a Buddhist monk in Tang dynasty of ancient China. He has a bag filled with good fortune to give to us.

How to get to Yasaka shrine?

Generally speaking, Omuro Zakura of Ninnaji is the last-blooming Sakura in Kyoto. It is in full-bloom in mid-April usually but it might bloom about 2 weeks earlier. You can learn about the Sakura and the way to enjoy it in this article.
2020.03.12

In 2002, lots of events are abbreviated or canceled due to COVID-19. Gion matsuri is one of the oldest matsuri/festival in Japan.There are many rituals held in July. In this article, you can see exact schedule they are held.
2019.05.27
スポンサーリンク
Hakuba/aouma Soran Shinji 2020 at Kamigomo shrine in Kyoto
Cherry blossoms Night Illumination spots 36 in Kyoto 2020
スポンサーリンク