At the Buden of Yasaka shrine, you can find a white board which says “祝 国宝 本殿一棟 重要文化財 摂社末社社殿他建造物 二十六棟 以上指定されることになりました.” The sentence means that the main hall is to be designated as a National Treasure and 26 sub-shrines and other buildings are to be designated as Important National Properties. On 16 October, the council for cultural affairs approved those.

“The main hall was built in 1654 by the directions of Tokugawa Ietsuna, the 4th Shogun of Tokugawa Shogunate. The main hall is constructed in Gion Zukuri method: The roof it put two halls together.

It shows us traces of the construction of temples in Heian period and tells us the relationship between the hall and the religious phenomena in medieval Japan (the 12nd~16th century). The council for cultural affairs found it highly valuable in terms of the architectural history.

In addition to it, Yasaka shrine and Ujiko (people who lives in a area a shrine belongs) have kept Gion Matsuri festival alive for over 1,000 years. The council also found the fact important in terms of cultural affairs.”

In near future, an official bulletin will announce the resignation.

The construction of temples in Heian period 平安時代の建築の空間構成

It is not sure when Gion sha was founded. Yasaka shrine says that it was founded in the 7th century. Before Meiji restoration, Shinto and Buddhism had been fused for a long time. Yasaka shrine is no exception. It is used to be called Gion Sha, or Gion Kanjinin temple.

Daijokanpu (太政官符) , the official document issued in 935 reports that Hondo enshrines Tenin, Harime, and Hchioji. This proves that at least there was a Hondo in 935.

Some time later, Hondo and Raido makes one hall. We cannot tell when the fusion took place. In 1220, Gion Sha was caught by fire. In the very next day, the investigators made an offcial document. It describes a construction of Gion Sha precisely and tells us that it is almost the same that of Yasaka shrine today, i.e., Yasaka shrine inherits the construction of Heian period.

Gion Zukuri method: the relationship between the hall and the religious phenomena in medieval Japan 祇園造の構造：中世の信仰儀礼と建物の関係

Now, let us understand what is the construction of Heian temple.

『指定文化財総合目録建造物篇』, the list of Important National Properties describes that Yasaka shrine in in Gion Zukuri method. Gion Zukuri is a construction indigenous to the shrine formerly known as Gion Sha, a Buddhist temple. In this method, two halls forms one building.

Daijokanpu (太政官符) , the official document issued in 935 reports that Gion Sha has one Hondo and one Raido. The main hall we have today is based on these halls.

Raido is a hall in which people pray in both of the religion. 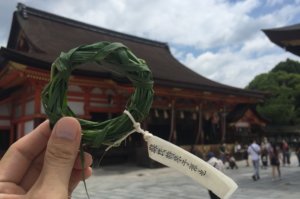 As time goes by, these halls developed into one hall. As a result, inside of the main hall in the photo, there is another main hall with a roof though we cannot find it. 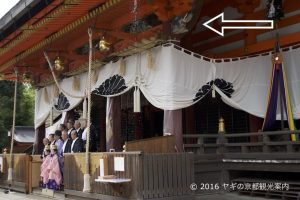 The priest with Okerabi is in the video stands near the pillar indicated in the allow in the photo. Behind the lattice, there is a Raido. Raido encloses Hondo (we call it Honden but it plays the same role.). In Hondo, three Yorishiro are installed. I have no idea what the Yorishiro is because it is not allowed to see them but I can show you a good example.

Around 3:50 in the video, a horse has a three plants on his back. These are Yorishio. The Deities are on the way to a downtown in Gion Matsuri festival.

Traditionally, Hondo and Raido is separated in Buddhist temple. We can tell the exact reason why these two halls were put together. People might have wanted to be near the Deities and invented Gion Zukuri.

How to get to Yasaka shrine?

It would be better to take trains to keep social distancing,

The archery competition of Sanjusangendo is called "Toshiya." In 2022, the competition takes place but is not open to public. Enjoy the archers in beautiful Kimono and its 600 years of history!
2020.01.11
スポンサーリンク
2020年京都の紅葉混雑予想：コロナ対策２
牛頭天王と八坂神社：疫病退散とコロナのご利益
スポンサーリンク