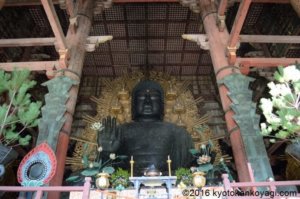 This is the great Buddha statue in Todaji, a.k.a. Daibutsu (大仏) of (or in) Nara. The word Daibutsu means “a statue of Buddhist Deity.” Usually, Daibutsu means huge one but some small ones are also called Daibutsu. For example, the Afro Buddha in Konkai Komyoji temple is known as “Afro Daibtsu” though it is not as big as Daibutsu of Nara.

The real name of Buddha statue in Nara is “Birusyanabutsu of Rushanabutsu(毘盧遮那仏/盧遮那仏).” It is the most important Deity for Todaiji temple, was designated as a World Heritage site in 1998. 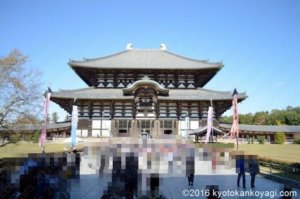 The statue is enshrined in the Kondo Hall called “Daibutsuden.” Kondo is a hall the statue(s) of Deity is placed. Datibutsuden and the statue were caught by fire two times. The last time it saw fire was 1567 and Daibtsuden we can visit today was build in 1709. The statue had spent for nearly 150 years without roof. Its floor is around 123 sq yｓds and height is 160 ft. It is one-story building despite its appearance. 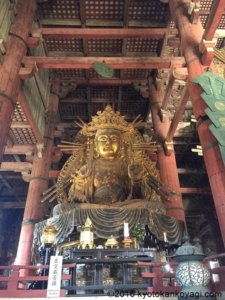 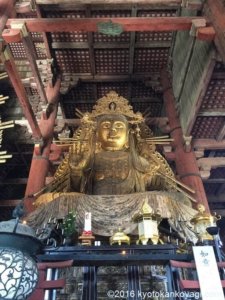 Inside of Daibtsuden, there are six Deities to save Daibutsu.

This article is for your reference. We are not responsible any disadvantage you have.

There are lots to see in Daibutsuden. I’ll show you them in another article.

Daibtsu sits on a huge lotus. From head to the lotus, the height is about 50′. The lengh of head to chin is 11′. 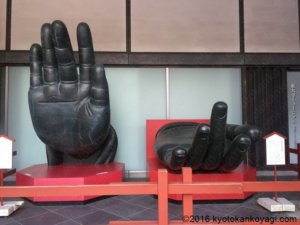 Near the entrance of Todaiji museum, there are replicas of Daibutsu hands. They were duplicated in actual size. 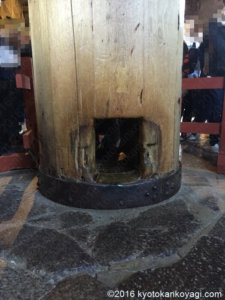 In Daibutsuden, there is a pillar with a hole. The hole is the same size as the nostril of Daibutsu. It is believed that if we could crawl thorough it, Daibutsu would give us good fortune. 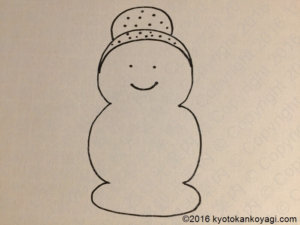 The statue has a hill on its head. It is called Nikkei and stands for the mercy of Daibutsu.

I'll show you the sites not to be missed: 5 popular ones and 5 underrated ones. On the latter part, you can see popular annual events in Kyoto. Enjoy the ones you would like. 合掌
2022.05.25
For International Readersおすすめ記事

Kodaiji enshrines Bodhisattva Kannon robot. She reveals what The Heart Sutra and the way to Nirvana. This article is a special report of her preaching ad Kodaiji temple and an easy intruduction of The Heart Sutra.
2019.04.08
For International Readers

So far, Japan keeps low death toll in comparison to other nations. Some say that one of the reasons is Japanese people love to be clean. I'll analyse the reason why in terms of the cultural inheritence.
2020.04.14
For International Readersおすすめ記事

The report of 2022 on Kawazu Zakura, the earliest bloom Sakura in Kyoto. We can find some of them in Ichijo Modori bashi bridge, Toji, Unryuin, and Philosopher's path.They go into full bloom around mid-March.
2022.02.03
Sakkura/Cherry blossom
スポンサーリンク
Afro Buddha in Kyoto アフロ大仏英語で説明
京都の河津桜2023：おすすめベストランキング3・東寺ライトアップ
スポンサーリンク