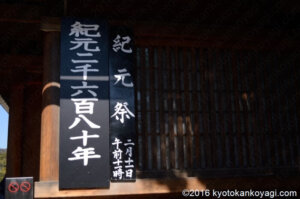 Kigensai festival (紀元祭) is a ritual to celebrate the foundation of Japan. According to Nihon Shoki,『日本書記』 (The Chronicles of Japan),the oldest official history book compiled based on Japanese mythology in the 8th century, Emperor Jinmu (神武天皇) gave birth to Chrysanthemum throne and became the 1st emperor of Japan in 660 B.C. ad Kashihara no Miya palace, a place known as Kashihara Jingu shrine today. 2022 marked Koki (Japanese Imperial year )2,682(皇紀二千六百八十二年).

In this article, I introduce his odyssey narrated in the chronicles , Kashihara Jingu shrine, and its Kigen Sai festival to you.

In 2022, Only priests held rituals. Kashihara Jigu asks us not to attend it.

The sentence tells us that emperor Jimmu acceded to the Imperial throne at Kashihara no Miya palace in the spring of a year of Kanotori.

Kanotori is one of ancient ways of express years. It’s not unique like 2021 D.C. We had lots of Kanotori years. For example, 600 B.C. is also a year of Kanotori.

And the book also narrates his reign lasted 76 years.

It is the way of Nihon Shoki. It shows us the years of accession of every emperor or empress and their reigns. Thanks to this way of description, we can know the year of emperor Jinmu’s accession.

In Meiji era (1872), Meiji government decided that the accession of emperor Jinmu is the foundation of Japan. 660 B.C. is the first year.

Imperial period, like Reiwa, started on the same year.

The odyssey of Emperor Jinmu神武天皇即位までの経緯

His odyssey is so long. In this chapter, I’ll tell you some of important stories.

According to the first chapter of Nihon Shoki, his name is Kamiyamatonoiwa Arehiko no Sumera Mikoto(神日本磐余彦天皇).

It is believed that a highly educated court noble gave the name “Emperor Jimnu” to Kamiyamatonoiwa Arehiko no Sumera Mikoto  in the 8th century.

Jinmu is an Imina of Kamiyamatonoiwa Arehiko no Sumera Mikoto. In ancient times, it was rude to call emperors by their real names. People called them by Imina instead.

When Emperor Jinmu was 45 years-old, he departed Hyuga, his birth place, for Yamato no Kuni (Known as Nara today) with the intention to build a capital and to rule Ashihana Nakatsukuni. 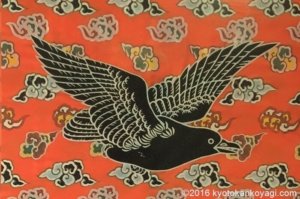 He left Hyuga with his brothers and his army for Usa (Oita). Then he headed for Yamato no Kuni by way of Setonai Kai sea. They reached Kumano (Wakayama) and got lost. When they were at a loss for their way to take, Amaterasu Ohmikami sent Yatagarasu (八咫烏) for them. Yatagarasu is a big crow with three legs. It leaded them to the way to Yoshino (and Yamato no Kuni). 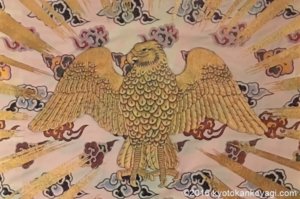 When they reaced Yamato no Kuni, they fought with a ruler of a region of it. They struggle with them in the toughest battle field they have ever experienced. In addition to it, the sky got dark and it started to hail.  Then, all of a sudden, Kinshi (金鵄), the golden black kite, appeared out of nowhere to rested at the bow which emperor Jinmu had and emit the rays of light. They were terrifying enough to make the enemies surrendered. After they won the fight, they managed to make surrender Yamto no Kuni itself. Emperor Jinmu constructed a palace called Kashiyara no Miya (橿原宮) at the foot of Mt. Unebi and he acceded there. The foundation of Japan was completed. 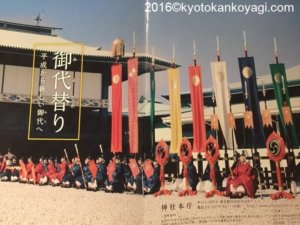 At the enthronement ceremony, there are banners like those. Before WWII, some of them has embroidered Yatagarasu and Kinshi. Today they are omitted due to the separation of country and religion.

These photos of Yatagarasu and Kinshi are file holders they are printed on.

What is Kashihara Jingu? 橿原神宮概説

Kashihara Jingu shrine was constructed on the palace Kashihara no Miya used to be located in 1890 on people’s demand. Emperor Meiji donated buildings of Kashiko Dokoro (A shrine where Amaterasu Ohmikami was enshrined. ) and Shinkaden (A building where rituals to be held.) 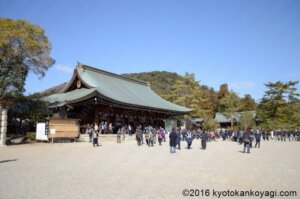 Kigen sai of Kashihara Jingu shrine starts at 11:00 a.m. It takes about one and a half hours. 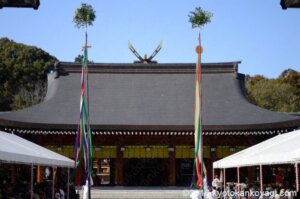 This is Naihaiden where emperor Jinmu is enshrined. We can attend the rituals under the white roofs with a reservation in advance. 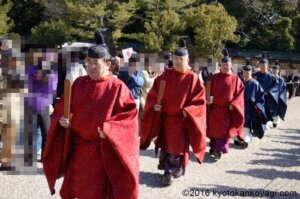 And Aoi Matsuri festival is held by both of them and it welcomes Chokushi.

Emperor sends Chokushi to some places which are not Chokusai sha. For example, His Imperial Majesty sends him to Goshichinichi Mishiho ritual of Toji temple because the ritual used to be held in the Imperial Court. The box is called Karabitsu(唐櫃). It contains the Yanai Bako (柳筥) box in the photo. In side Yanai Bako, there are scrolls of cloth called Goshiki no Ashiginu(五色絁). They are the gifts from emperor Naruhito.

When the ritual is prepared, we sing National anthem, Kimigayo (Emperor’s regin) The grave of emperor Jinmu is located near Kashihara Jingu shrine. It takes around 30 minutes walk.

Parking lots for about 800 cars.

The fee is added every 24 hrs.

Aoi Matsuri festival in kyoto 2022: CANCELED due to COVID-19

Due to COVID-19, Aoi Matsuri festival 2022 is canceled. In this article, with many photos and videos, you can see the way to enjoy Aoi matsuri festival. Its history, the rituals going with it, the famous parade.
2017.11.01