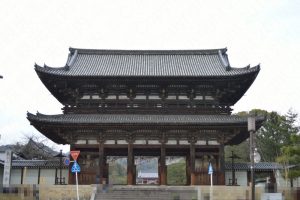 Ninnaji was founded in 888 and the first Monzaki Jiin temple. Monzaki Jiin is temple run by the emperor or his descendants. Emperor Uda gave up his Imperial throne to the clown prince and started his new life as a monk at Ninnaji in 897. People called it “Omuro Gosho.” This is the reason why Ninnnaji is called “Omuro Ninnaji.” 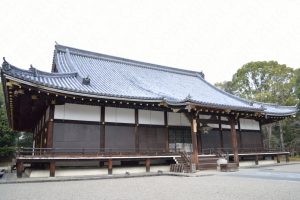 Monzaki Jiin temple has a building once belonged to the Imperial Palace. Ninnjaji is not exception. Kondo used to be Shishinden where important rituals are held. It is the oldest Shishinden in Japan.

In this chapter, I’ll show you a plan to enjoy Omuro Zakura and Kitano Zakura in Kitano Tenmangu shrine. Be sure that these two kinds of Sakura might not bloom at the same time.

There are not many restaurants near Ninnaji. It would be better to have a lunch in other places.

Enjoy Arashiyama in the morning and go to Ninnaji temple by Randen railway.

It takes 2 hours to admire Omuro Zakura, other spring flowers, and Goten (The buildings of Ninnaji temple).

Go to Rannden Ninnaji station and to take a train bound for Kitano Kakubaicho. The platform is indicated in the map.

Do not cross the railway! Or you’ll be in Arashiyama, the opposite direction!

There is a huge Torii gate at the red annotation in the map. 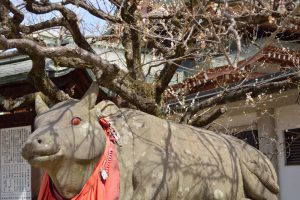 Pass the gate and you’ll find a statue of ox (the blue ox in the map) in the right. 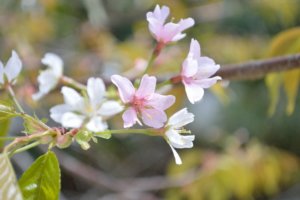 At the red flower in the map, there is a Kitano Zakura tree. The flower starts to bloom in mid-April usually.

How to get to Ninnaji temple?

Now the state of emergency was lifted in Japan but the fear of COVID-19 still exists. In this article, I'll show you places to visit for enjoying Goriyaku (Good fortune), Aomomoji, and other things in Kyoto keeping social distance.
2020.05.26
スポンサーリンク
Cherry blossom a.k.a.Sakura forecast in Kyoto 2020京都の桜開花予想英語版
Kitanozakura 2021: The last blooming Sakura in Kyoto 北野桜英語で説明
スポンサーリンク