Passing through Todorokimon gate of Kiyomizudera, we catch a glimpse of a Kawaii statute. He is Shusse Daikokuten, a Buddhist deity who welcomes the visitors of the temple for over 500 years. We call him Daikoku-san with respect. In this post, let us learn who he is. 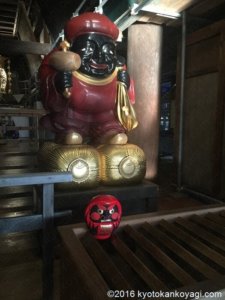 Daikokuten is one of the seven deities who bring us fortunes, especially wealth. He is originaly a Hindu deity Mahakala, aka Shiva adopted by Buddhism.

Mahakala means “great black one.” In Japanese, it is translated as “Daikoku.” “Ten” of Daikokuten is a suffix for a guardian deity of Buddhism. 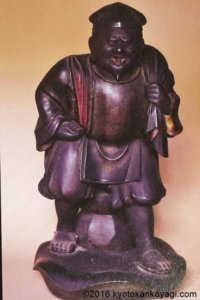 As Daikoku-san of Kiyomizudera, Daikokuten usually smiles but some of his statues are angry because he is originally a deity of creation and destruction.

The ability to create made him a deity of prosperity and fertility. The fertility was so  emphasized he was known for a guardian of kitchen.

Shusse means promotion (in career) in Japanese. As described before, he is a deity of prosperity. Daikoku-san of Kiyomizudera is well-known for his Goriyaku (Good fortunes deities gave us) of Shusse.

In the next chapter, make sure his other Goriyaku respectively.

Take a look at the hummer he has. It is Uchide no Kozuchi. With one shake, we could have anything we need. In Japan, it is a symbol of economic fortune and wealth.

He has a bag in his left hand. It contains treasures.

Uchide no Kozuchi also gives us fertility in cultivation. He is on two Komedawaras. Komedawara is a container of rice and the symbol fertility.

Goen is a bond. As indicated before, he fuses with Okuninushi. Okuninushi is a Shinto deity who give us bond among persons. Love-seekers want his Goen. 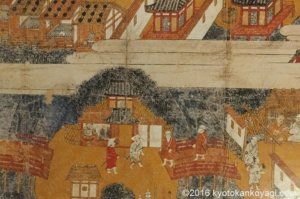 Today, Daikoku-san is located in Kiyomizudera but he used to be in a small temple in the island of Kamo river. The picture describes Daikoku-san in the 16th century.

The island is on the tip of the secular world. The inside of the white walls is the sacred world. The visitors prayed for Daikoku-san and got into the other world. 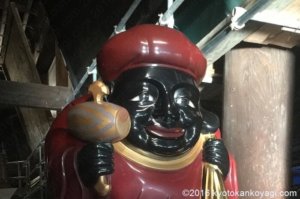 The statue was made in around 15th century. He is very beautiful because re-painted recently. 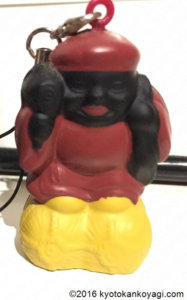 Many Daikoku-san amulet is available in Kiyomizudera. And small “puni-puni” Daikokusan is strongly recommended. Small one is 350 JPY and large one is 900 JPY.

I can’t translate “puni-puni.” I suppose cat beans has a “puni-puni” touch.

The nearest bus stop is Kiyomizu Michi bus stop. It takes about 20 minutes to Kiyomizu-dera.

Kitanozakura is the last-blooming Sakura in Kyoto. It is only found in Kitano Tenmangu shrine. Usually, it starts to bloom around April 15 and is in full bloom in around 20th.
2020.03.18
Sakkura/Cherry blossomその他

Gion matsuri is famous for Yamaboko floats but the most important thing is Mikoshi, or porptable shrine. In this article, I'll show you the history, importance of it.
2019.07.10
For International ReadersGion Matsuri Festival

Overview In this article, you can learn about Fushimi Inari Taisha ; Its history, Senbon Torii gates,   foxes, and Oyam...
2018.02.27
For International Readersおすすめ記事

Rurikoin is one of the most underrated place to admire Aomomiji (Maple leaves in fresh green) though it established its reputation as a place to enjoy autumn leaves butIn this post, I'll show you how amazing it is.
2022.04.25
For International Readers
スポンサーリンク
Sennichi Mairi in Kiyomizu-dera temple 2022: 清水寺千日詣り英語で説明
霊鑑寺の紅葉2022秋の特別公開のみどころ
スポンサーリンク