Kiyomizu dera had been under renovation for years. Check the link!!!

Kiyomizu-dera renovation finished in 2020
Kiyomizudera consists of about 15 buildings and some of them were renovated in the name of "Heisei no Daikaisyu 2008-2020(Reconstruction in Heisei period). "

A short history of the stage 清水の舞台の歴史 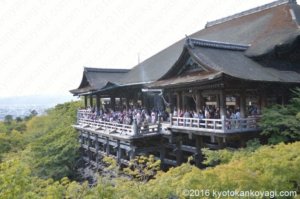 See the photo. It is the iconic stage of Kiyomizudera temple. It is a place where performances to be practiced for Kannon, the Deity enshrined in the main hall. Between the stage, there are 2 places with an independent roof. They are called Noh dai where musicians to be placed.

The line indicated with white is a floor of Nainaijin, the most important place where Kannnon and other Deities are enshrined. We can’t be there usually except Sennnichi Mairi in August. The black line is a floor of Naijin. Nainaijin and Naijin consists of the Seido in the main hall and are on the edge of the cliff.

The blue line is a floor of the Raido. We can be there usually with shoes off. We can have a good view of the Omaedachi statue of Kannon. The authentic statue is enshrined in the Zushi (looks like a Mikoshi) and open to us every 33 years.

The red one is a corridor and the green one is the stage.

When the stage constructed? 舞台はいつつくられたか

Kiyomizudera was founded in the 8th century. A monk called Enchin (延鎮) make a figurine of Kannnon with a holy wood and enshrined it in a small hut on the cliff. By the end of the 9th century, the hut became a temple.

Like many temples in Kyoto, Kiyomizudera lost its documents due to fire and we can’t tell when the stage was constructed exactly. The oldest record is Naricmichikyo Kuden Nikki (『成通卿口伝日記』), a memoir of an aristocrat in the 12 the century. He was a Kemari master and boasted that his Kemari ball juggling on the fence of the stage.

In addition to it, other famous books in the century refer to the stage. For example,  Gikeiki(『義経紀』) , the story of Minamoto no Yoshitsune, one of the most popular historical figures, put it that he met Benkei at the stage.

On the other hand, Makura no Soshi (『枕草子』), the compilation of stories written by Seisho Nagaon says nothing about the stage.

Makura no Soshi was finished in 1002. At least, Kiyomizudera developed a stage between the 11th and 12th century. But I can’t guarantee the stage was the same in size and construction.

In Honen Shonin Eden (『法然上人絵伝』) in the 14 th century, the Emaki describes the life of Honen Shonin, the founder of Jodo school, tells us the way he held a ritual. The Emaki shows us that the ritual carried on on the stage of the main hall though it took place on the stage of Okunoin.

I’m sure the stage was iconic at least in the 14th century. 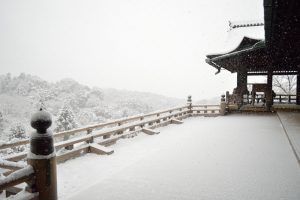 Kiyomizudera Sankei Mandala (『清水寺参詣曼荼羅』) in the 16th century narrates the renovation of Kiyojmizudera after Onin no Ran, the largest civil war in Japanese history. Its a picture of Kiyomizudera and its neighborhood. They are put in a sheet of paper and they are not described exactly but the the main hall, the stage, and other buildings resemble the ones we can see today.

The stage we can see today was constructed with a huge donation of Tokugawa Iemitsu, the 3rd Shogun of the Tokugawa Shogunate.

As a forcast of the autumn leaves in Kyoto 2018, Kyoto Goat choose top 10 underrated sites of 57 shrines and temples.
2018.09.28
Autumn LeavesFor International Readers

Daijosai 2019: The Emperor Naruhito show his respect and gratitude to Amaterasu Ohmikami

Daijosai is the first Niinamesai the Emperor holds in his rein. It is a ritual in which the Emperor shows his respect and gratitude Amaterasu Ohomikami, the most admired Deity in Shinto and the ancestor of the emperor.
2019.11.10
Enthronement/即位For International Readers

In the middle of November in 2017, maple leaves in some place are in bloom. So, let me introduce the latest autumn colo...
2017.11.16
Autumn LeavesFor International Readers

In 2021, we still found ourselves in the middle of COVID-19 and Kyoto is having "Autumn leaves season" with it.In this article, I'll show top 10 places to enjoy the season avoiding so-called "Three C's." Closed, Crowded places with many people nearby, and Close-contact settings.
2020.10.22
Autumn LeavesFor International Readers
スポンサーリンク
Kyoto station to Kiyomizudera by bus: To avoid busy route
スポンサーリンク