This article is the most precise information on the rock garden and Ryoanji temple. The garden is the most famous dry garden in the world. We discuss about its history, the meaning of the garden, other must-sees, and what Zen is.

A short history of Ryoanji temple

The history of Ryoanji dates back to the 15th century. In 1450, Katsumoto Hosakawa (細川勝元),  a General  of the eastern Army that lead the largest civil war called “Onin war (応仁の乱 1467-1477) in the middle ages of Japan, inherited a villa build by Saneyoshi Tokudaiji (徳大寺実能). He made the villa his residence and built Ryoanji temple. He invited a monk named Giten Gensyo (義天玄承)  from Myoshinji, the largest Zen temple of Rinzai school, and make him as a founder of the temple.

The Onin war made Ryoanji temple into ashes and Masamoto Hosokawa, a son of Katsumoto’s rebuilt it in 1499. In 1797, a fire burnt down Ryoanji anew. During the Meiji restoration, the Meiji government gave an order: Shrines and temples  must be separated in terms of law. (As I indicated in the article on Gion matsuri festival, shrines and temples were fused.) The order caused destruction of Buddhist temples though it intended nothing but a separation of both religion and put Ryoanji temple into decline. In 1975, Queen Elizabeth Ⅱ of Grate Britain paid a visit and praised “the rock garden” of the temple and her admiration made the garden famous. In 1994, UNESCO enlisted Ryoanji and its garden as a world heritage site.

The secrets of the zen rock garden

When was the garden built? 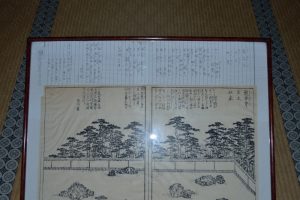 A source shown in a Ryoanji temple (The Picture above. It is a copy of a book on the rock garden.) tells that the origin of the rock garden was build in the days of Hosokawa Katsumoto. The garden of his villa has strange rocks and no trees because he wanted to see Iwashimizu Hachimangu shrine every morning over the garden. The book explains the rock garden of the villa of Katsumoto Hosokawa’s and does not exactly tell the dry garden of the Ryoanji (The garden in the picture has a resemblance with “The rock garden” of today.). I suspect “The rock garden” was constructed on the that of Katsumoto’s villa. Some source says that the original garden had a corridor that pass through south to north side to admire the both side of the garden. As I stated before, the temple was caught in fires at least two times and these fires burnt out the documents that prove that what the origin of the garden was like.

Who did make the garden?

The builder of the garden reminds to be a mystery. It is believed that Soami, a gardener designed the garden. On a stone in the garden, the names of persons are engraved. They read “小太郎・口二郎 (Kotaro, Kuchijiro)” but we cannot tell whether they are builders of the garden or not (We cannot see these Kanjis from a veranda.). We can not say who build the garden.

The inspection of the garden 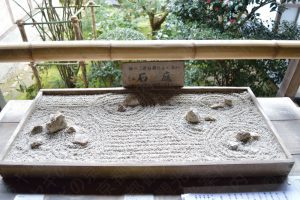 Take a look at the garden before discussing about it. The picture above is a miniature of the rock garden you can find at Ryoanji temple.

The actual size of the rock garden is around 83 feet from east to west and 33 feet from north to south.The garden has 15 stones ans they are put into 5 groupings. 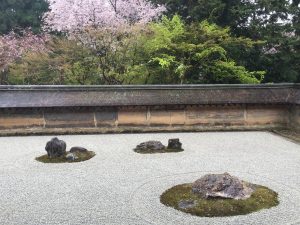 Around the groupings of rocks, there are moss islands.

These island and rocks are floating on the sea of carefully raked white sand.

The garden has no plants except moss because we can enjoy the same view of the garden in every season. This is a typical construction of Karesansui teien (枯山水庭園), or a dry rock garden.

Let us make a close inspection on Japanese garden. We can see these plants behind a wall. They are outside of the garden. The garden itself has no plants and flowers except moss. 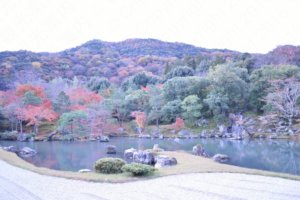 The plants and flowers are called Syakkei (借景) . Syakkei literally means “Borrowing scenery”. It is an art of dry rock garden. We usually “borrow” trees and mountains behind a garden and see them as parts of it. See the picture above. This is a garden of Tenryuji temple. It “borrows” the Mt. Arashiyama stands outside of the garden. 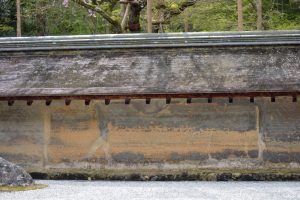 Now let us talk about the wall. This wall are made of clay boiled in seed oil. The oil seeped out of it and make “scenery” on the wall. It gave us a “wabi (poverty)-sabi (solitude) impression. 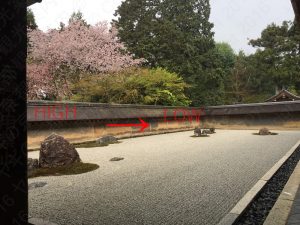 The peculiar thing about the wall is its height. From east to west, the wall gradually loses its height for drainage. Precisely, the garden is not horizontal in order to drain water.  It is said that the constructor had another intention; To gave us an impression that the garden broader than the actual size taking advantage of the gradual change of the height of the garden.

The meaning of the garden

The intention of the garden is also controversy. We have many hypotheses. I show you three of them.

Crossing the river with tiger cubs

This hypothesis depends on an old Chinese anecdote. When a tiger gives birth to three cubs, one of them is a leopard. The tiger family wants to cross a river. The mother tiger can cross the river with only one cub. The leopard eats tiger cubs without the presence of the mother tiger. So, the mother tiger crosses the river in this fashion; 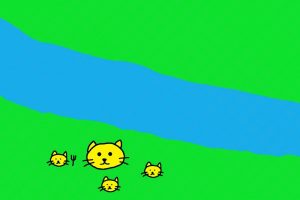 A tiger family. A cub that has a fork is a leopard. 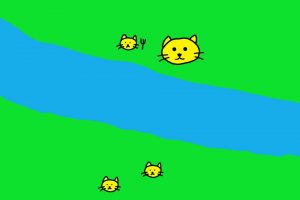 The mom crosses the river with the leopard. 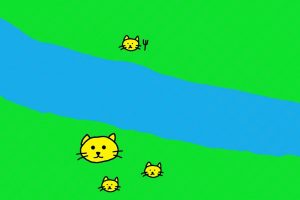 The mom comes back. 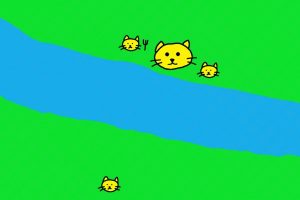 The mom brings a cub to the other side. 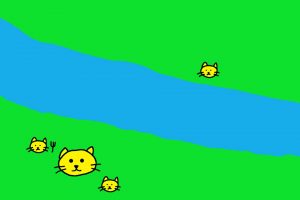 The mom comes back with the leopard. 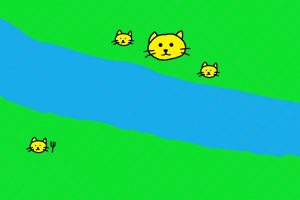 The mom brings another cub to the other side. 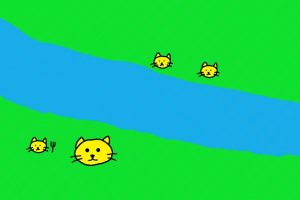 The mom comes back to the leopard. 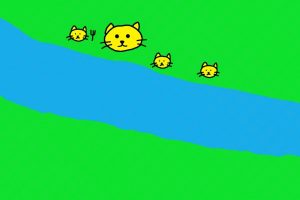 The mom crosses the river with the leopard.

At Ryoanji temple, there is a miniature of the rock garden and a guidance beside it. The guidance explains that the garden indicates this hypothesis.

The rock garden has 15 stones. In the East, 15 is a numeral that means perfection. because the moon becomes full moon in 15 days. Seated on the veranda of Hojo, the main hall of the temple, we can see only 14 stones (If we stood there, we can see all of them). The constructor or designer of the garden intended to show imperfection in perfection (This is one of the typical conception we Japanese have.) . 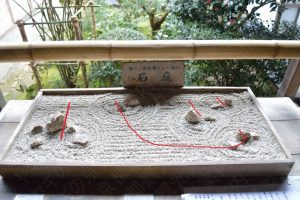 Seeing the groupings of rocks as a Kanji letter “心”. The Kanji means “heart” or “mind”. In Zen, we prefer communicate without words.