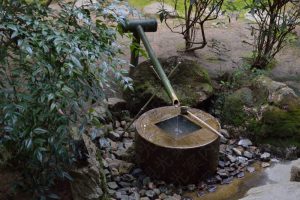 This is a wash basin located on the other side of the rock garden. It is a replica and the authentic one belongs to the Tea room in Ryoanji temple.(We can not enter the tea room.) 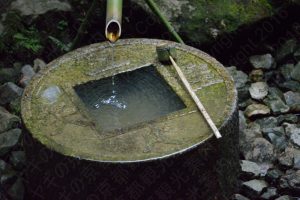 Let us take a close look at it. We can see a square and some kanjis on it. The square works as a part of these kanjis.

They read in clockwise; 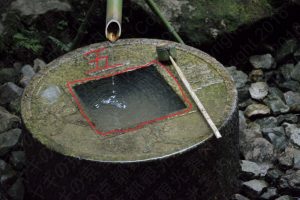 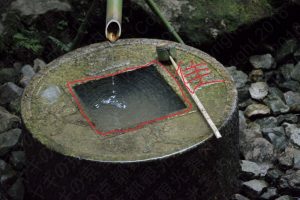 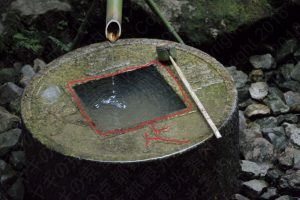 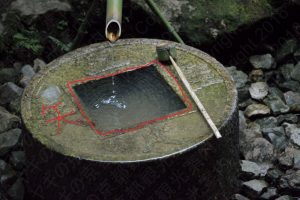 “吾唯知足” read “ware tada taru wo shiru”. This is a kind of poem in four kanjis. Kanji is very prolific and we Japanese encounter it, we can find many meanings in it simultaneously. So it is very difficult to translate the poem composed in Kanji.

The following are my translation; 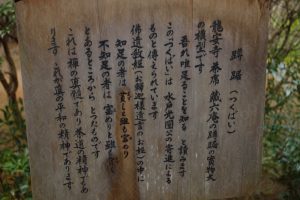 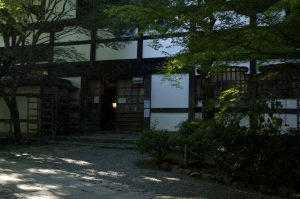 Kuri (庫裡) is a main building which monks live in. Almost all Buddhist temple has it. It is adjacent to Hojo, a hall/building which abbot lives in. In these days, they don’t live there usually. There is a garden in front of Hojo. As is often the case with traditional Japanese house, we take off shoes at the entrance. 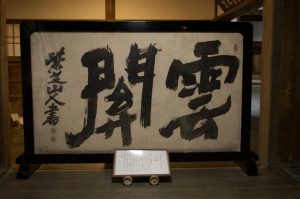 Kuri of Ryoanji, you can see huge calligraphy. 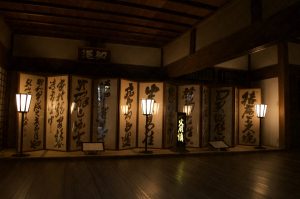 This partition might catch your eyes. These Kanji calligraphy is a poem composed by Toh Enmei (陶淵明、in Chinese, Tao Yuanming). The title is “Insyu njyusyu sonogo(飲酒二十首 其五)”, I suppose the English translation would be “Ode to drinking, chapter V”. 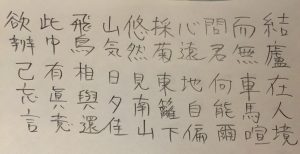 The kanjis on the partition is written like this.

Let us see the translation.

” As I live in a small hut, no visitors (In this poem they mean a kind of civil servant.This sentence implies that the author lives like a hermit.) disturb me.

You ask me, “Why can you stand such a circumstance?”

I dare to say, “Living without thinking for the rest of the world, we get accustomed to live in the end of the world.”

I pick chrysanthemum near the wall, catching a glimpse of mountains.

Birds are coming to their nest, how fabulous in the twilight!

That’s the absolute truth. I try to explain it with words, only to fail it.”

The moast recommended 20 sites to admire night illumination of cherry blossom or Yozakura in Kyoto.
2019.01.29

Setsubun 2021: Dinanogi at Heian Jigu shrine CANCELED due to COVID-19大難の儀と節分英語で説明

Dainanogi is a Setsubun ritual presented at Heian Jingu shrine in the same form as it was took place in Heian period. In that period, people believed the ending of each season caused evil spirit which brought them illness and misfortune. So, they started to hold the ritual to put down it. In 2021, some rituals are canceled due to COVID-19
2017.02.11
スポンサーリンク
春はいつでも土下座の夜明け（高山彦九郎皇居望拝之像）
茅の輪のくぐり＠八坂神社の夏越の祓2021でコロナ対策
スポンサーリンク