A history of Toshiya archery 通し矢の歴史 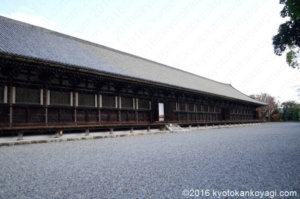 In ancient times, archery games were held in January in the Imperial court. The oldest one took place in 483.

Toshiya started in Tensho period (1573-1593). A monk shot arrows under the roof of Sanjusangendo. He kicked off a huge popularity of Toshiya.

In the period, the most popular game was “Ohyakazu 大矢数.” The archers aimed at a target 130 yards ahead. They shot arrows for 24 hours. Their triumph depended on the numbers of the arrows they shot.

Archers fight for the honor of a Han they belonged. Han was a kind of prefecture ruled by warlords. 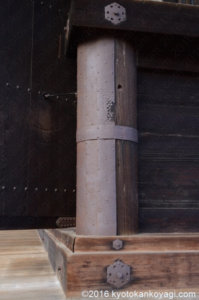 Some of the pillar of Sanjusangendo tell us the days of old. They have lots of halls. 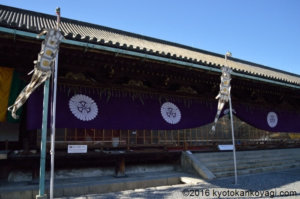 Sanjusangendo belonged to a temple called Rengeohin constructed in 1164 with the donation by Retired Emperor Goshirakawa. It was a huge temple and consisted of many buildings including Sanjusangendo in 300 acre. Rengeohin was caught by fire in 1249 and only Sanjusangendo escaped it narrowly.

“Sanjusan” of Sanjusangendo means 33. The name is translated “a temple which has 33 ken. Ken is a wall between pillars.

Hey, Sanjusangendo has 35 ken, doesn’t it? I counted them!

My turn! Let me explain!

Ken of Sanjusangendo means of Moya of it has 33 ken and 34 pillars.  Moya has a roof and there are extra 2 pillars for it. So, it has 35 ken and 36 pillars in appearance.

It enshrines 1,001 Kannon statues inside. All of them are national treasure of Japan. If you were interested in Kannon, check the link below.

Kiyomizudera statues 1: Kannnon with 1000 hands
The Gohonzon, the Buddhist statue of Kiyomizu-dera temple, is "Juichimen Senju Kannon," who saves us with 11 faces and 1,000 eyes and hands.

The statues of Fujin and Raijin inspired Tawaraya Sotatsu to paint Wind God and Thunder God.

So, take Keihan railways. Get off at Keihan Shichijo station.

If you stayed The Thousand Kyoto Hotel, or Kyoto Century Hotel, you would take advantage of Keihan 100yen bus. Ask tickets at the front desk.

This is the absolute guide of Ashizoroeshiki of Kamokurebeuma held at Kamigamo shrine. It is an important ritual of Aoi matsuri festival in Kyoto.
2019.04.29

Star festival in kyoto, or Tanabata In early August, star festivals (Tanabata in Japanese) are held in many places ...
2018.07.08

The renovation of Kinkakuji temple, or the golden pavilion started in September 2020. The roofs of it will be replaced. In this article, I'll show you the Kokerabuki roof method and how the replacement takes place. The iconic view will be back in December.
2020.09.07
スポンサーリンク
後七日御修法後拝み2021 於東寺
Goshichinichi Mishiho 2021 at Toji temple: The ritual held in ancient Imperial court 後七日御修法英語で説明
スポンサーリンク