Takayamma is one of the long-lost Yamahoko floats in Gion matsuri. The last time Gozu Tenno, the Deity of Yasaka shrine, laid his eyes on it was 1826. Yamahoko parade was canceled last 2 years due to COVID-19. In 2022, Yamahoko Rengokai gave the green light to the parade and Takayama will come back to it for the first time in 196 years.

I show gratitude and respect those who engage in Gion Matsuri and the revival of Takayama. Congratulations and welcome back. 合掌

The schedule of Takayama 2022

Takayama is a Yamahoko floats that describes Japanese falconry. In Japan, falconry has over 1,600 years of history. Even today, we can enjoy an exhibition of it in Hamarikyu in Tokyo every January.

When did Yamahoko Parade start? : A short history of Yamahoko parade 山鉾巡行はいつから始まったか英語で説明
Introduction Gion Matsuri festival is famours for Yamahoko floats and their parade lures lots of people to the ancient ...

Takayama is a Hikiyama. Make sure the types of Yamahoko floats.

Most of Yamahoko floats have a topic on Japanese mythology, anecdotes, and so on. Takayama was born around 15th century.  Many Yamahoko floats of the time was invented on plays of Noh.

At that time, town community gave birth to Yamahoko floats and Noh was a popular play among them because it shows citizens ancient stories, pieces of Waka and Kansi.

On the other hand, the topic of Takayama is a falconry. Falconry was popular among Shoguns and aristocrats, not among citizens. No one can tell the reason why it was taken as the topic.

Most of the Yamahoko float we can see today was belong to town communities. Before Ohnin no Ran, the largest civil war in Japanese history, there were lots of floats belonged to Za, the Japanese guild. After the war, they were not able to Yamahoko Parade due to lots of reaosons, especially financial ones.

Takayama has three Goshintai figurines: Taka Tsukai with a falcon, Inu Tsukai with a dog, Taruoi, and Taruoi. As describe later, Takayama caught fire in 1864. It lost many parts of the float but these figurines and belongings escaped the fire narrowly because they were stored in a basement.

The figurine of Ho-oh of Kinkakuji also had a narrow escape.

He has a falcon figurine in his left hand. In his right hand, he has a stick. We can’t tell what it is because of the tip piece is missing. It could be a tool to take care of the falcon’s wings. In his back, he has a small basket with foods of the falcon.

In traditional Japanese falconry, when the falcon returns to Takatsukai with a game, he takes it and gives the falcon the food in the basket instead. 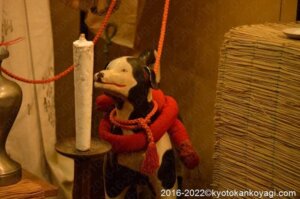 He is with a dog. In traditional Japanese falconry, dogs are not retrievers. They they run into bushes or woods to forces games out of them. 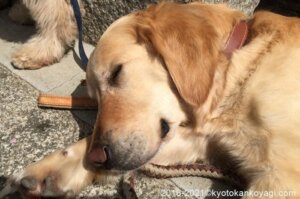 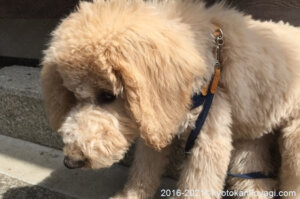 Takayama used to be a figurine of a pheasant but no one knows where it is today.

He wears a box on his back and has Chimaki in his hands. 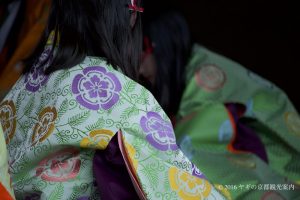 The box has Mokko Mon, the crest of Yasaka shrine.

Chimaki is known as amulet today but it originally is a food. At Gion Matsuri, Kusonushiyama sells eatable Chimaki. 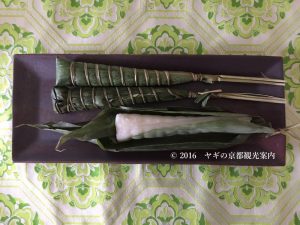 In early May, lots of Chimakis are available at grocery stores.

Some old documents say that it has a built-in gadget to move both of his arms to pretend to eat it.

A short history of Takayama

Before Ohnin no Ran (At least the 15th century)

We can tell when did Takayama participate in Yamahoko parde. The oldest record is 『祇園社記(Gion Sha Ki)』,the historical record of Gion sha temple. Takayama is in a group of Yamahoko floats which existed before Ohnin no Ran(1467-1477). Taka Tsukai , Inu Tsukai, and Taruoi are in Karusans, the Portuguese outfits. The dog has a white coat.

We are not sure how it looked like. The oldest record is a picture called 「日吉山王・祇園祭礼図屏風 (Hiyosi Sannno Gion Raisaizu Byobu」. Takayama has the four figurines, two Yamados, and dancers are on it.

In the floor, there are Yamados. Yamado is a something like tent on some Yamahoko floats and it has a pine tree on its top (see the photo above). Takayama had small one and large one, at the front side. Each of them has a pine tree. Takatsukai and Inutsukai are in the back of the Yamados. Near the small Yamado, Taruoi is behind of it and the dog is on the Yamado. 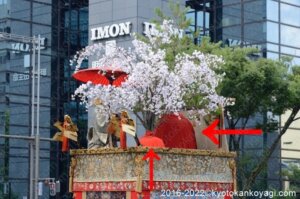 The dancers indicates that Takayama is Hikiyama (Yama with four wheels), not Kakiyama though the lower part of it is hidden in the picture: Kakiyama is carried by people like Mikoshi. Without wheels , we couldn’t carry a floats with large floor enough to have dancers on. As other Hikiyama, Takayama didn’t have a roof(s).

「祇園礼祭図巻 (Gion Rasisai Zukan)」painted in the late 17th century shows us that Takayana had only one Yamado with a pine tree. Taka Tsukai , Inu Tsukai, and Taruoi were in Samurai outfits. The dog was on the Yamado and had a spotted coat as we see today.

Koromodana-cho dsitrict has the balance sheets of Gion Matsuri. It tells us the incomes and the expenses from 1739 to 1814. It indicates that Takayama gained a roof in 1742.

A picture in 『祇園会細記』 (Gion-e Saiki)」, issued in 1757, shows us how it looked. It was a small roof over the Goshintai figurines at the front of the floor. The roof is a simple one and not the ones we can find in Hikiyamas today. Yamado was not covered with the roof.

Compared to the roofs of Hikiyamas today, it is a primitive. But it was a sophisticated one at that time. The roof of other Hikiyamas was like a camping tent. On the other hand, the one of Takayama had a      wooden roof.

Many documents Koromodana-cho has reveals that Takayama gained another roof over the Yamado in 1782.

Tenemei no Taika fire in the 18th century

In January of 1788, a small fire broke out. In the end, it burned Kyoto out. Five months later, only 12 of 34 Yamahoko floats, including Takayama, paraded. Takayama lost wheels due to the fire and took part in it as Kakiyama.

Many documents and pictures indicates that Takayama put the two roofs into a huge one after the fire but we are not sure when it took pace exactly.

In 1826, Takayama took part in Yamahoko Parade in typhoon and wrecked.

Genji no Taika fire in the 19th century.

Since 1826, the parts of Takayama stored in a warehouse belonged to Koromodana district. In 1864, Kinnonn no Hen, a rebellion against  Tokugawa Shogunate, took place Kyoto was devastated completely. The warehouse was a victim of it and Takayama lost its parts except the four figurines and others. They were stored in a basement of a house and escaped the fire narrowly.

The fire devastated Kyoto and prevented Kikusui Hoko and Ohfune Hoko form Yamahoko Parade. It took 89 years for Kikusui Hoko to come back to it. 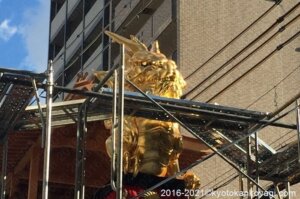 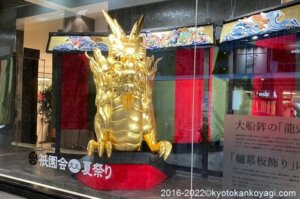 Ofune Hoko returned to the parade 150 years later (2014). And it took another 7 years to paint the dragon statue in gold. It tells us how tough to rebuild and returend to the parade.

After the fire, 33 Yamahoko floats came back to the parade by the 21th century. The last one was Ofune Hoko in 2014.

It took 190 years of struggle to find a hope. In 2016, Takayama Hozonkai was founded and joined Yamahok Rengokai.

This year, Takayama will returns to the parade for the fist time in 196 years completely. When Gion Matsuri 2022 started, I’ll upload reports. 合掌 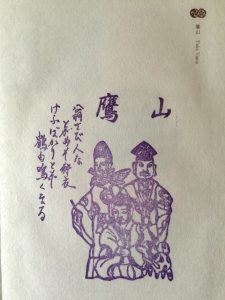 Takayam offered a simple Goshyin by the end of the summer of 2018. 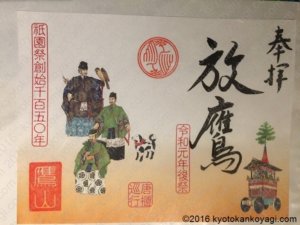 2019 was an important year for us. New Imperial year Reiwa started and Gion Matsuri commemorated the 1150th anniversary.

放鷹 is pronounced “Hoh Yoh” and it means falconry. 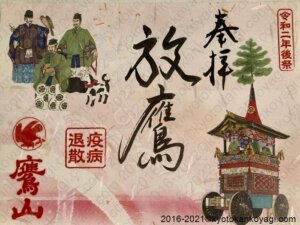 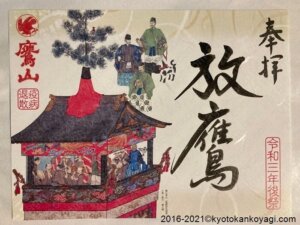 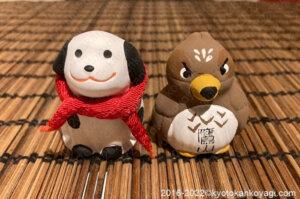 Tenugui, Omikuji and others are available

Let us learn the way to feed Sika deer with Sika Senbe crackers in a video with precise information. You also learn why lots of Sika is in Nara park.
2019.12.02

In 2020, the schedule of Gion Matsuri was changed due to COVID-19. Yamahoko parade, Yoiyamas of Sakimatsuri and Atomatsuri. are canceled and Mikoshi stays in Yasaka shrine though Deities visit the city.
2020.07.05

Yasaka shrine is to be designated as a National Treasure because of the Gion Zukuri method which tells us the relationship between the hall and the religious phenomena in medieval Japan
2020.12.10
スポンサーリンク
Saihoji/ Kokedeara/Moss temple guide: 西芳寺英語で説明
奉祝：鷹山復興於祇園祭2022後祭山鉾巡行
スポンサーリンク