Haradanien is a private garden only open to public in spring and autumn. It is little-known place and not a famous place to enjoy cherry blossoms like Heian Jingu shrine. It is the most popular destination among Kyoto-enthusiasts. It is well-kept secret place. 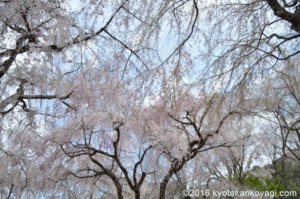 There are nearly 450 Sakura trees and about 250 of them are weeping cherry blossom trees. As reported in a video of Haradanien I’ll show you later, we always find ourselves in the midst of Sakura in Haradanien. In Kyoto, it is Heian Jingu shrine that the most popular site to enjoy weeping cherry blossoms as described in The Makioka Sisters, a extraordinary work of Junichiro Tanizaki. We can enjoy magnificent weeping blossoms there in the garden. We can see them outside of it. On the contrary, we can enjoy them in side of a huge garden. In Haradanien garden, cherry blossms are alive because we stroll in the sea of Sakura. It is said Haradanien devotee advice us “See the Sakura in Haradanien before you say farewell to the world.”

Absolutely! I’ll be there every spring as long as I live! 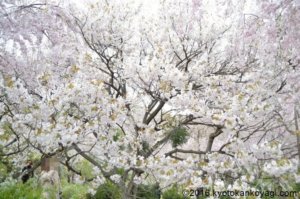 Omuro Zakura is named after Oumuro Ninnaji temple. Omurozakura has low tree due to clayey soil. It looks like shrub-Sakura. It has snow-white blossoms and known as a late-bloomer. 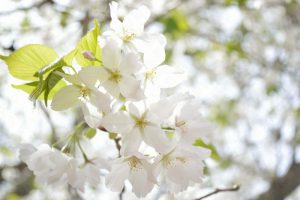 Oshima Zakura is one of the most popular Sakura in Japan. It is so fragrant. 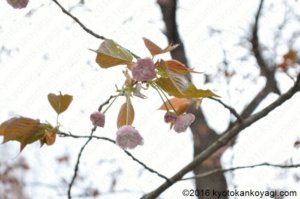 The word “Fugenzo” means an elephant which Samantabhadra, a Bodhisattva, is on. Ancient people found its pistil as an elephant nose. 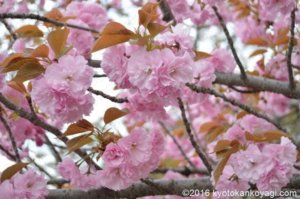 Yokihi means Yang Guifei in Japanese. A long time ago, there is a monk named Genso (In Japan, Xuanzong is pronounced “Genso.”) adore a Sakura. Some say it began to be called ” Yang Guifei.” 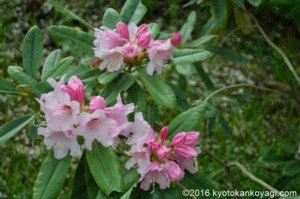 Shakunage is popular flower is spring. We find it anywhere in Japan. 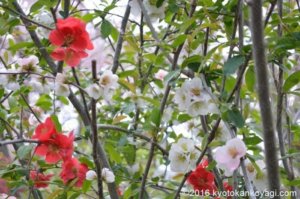 Boke is a tiny flower in red, white, or other pale colors. It tells coming of spring as Sakura does. 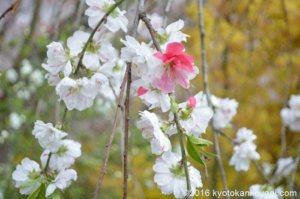 Momo is plum. It is lovely flower.

Now we are well prepared for Haradanien. Enjoy the video, BAAH! 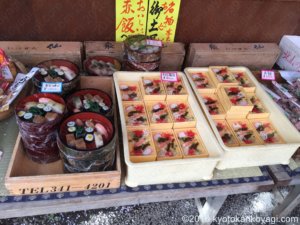 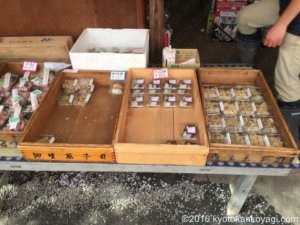 In Ohanami, or a party held under Sakura, we usually food and drinks. At Haradanien, we have Sushi bento and Sekihan. Of course we can also taste Wagashi.

Today, Haradanien garden is a famous Sakura spot but it used to be a dump site. The owner planted vegetables only to fail. He was at a loss and tried to plant Sakura trees and made a success of it. His descendants enjoyed them with their friends every spring. Some decades ago, they decided to open it to public only in spring and fall.

This is the easiest way to get to Haradanien. In front of Wara Tenjin (It is located near Kinkakuji temple.) The time table of 2019 is not announced. Last year, it departs every 30 miuntes (I can’t remember exactly.)  I’ll show you it when it is officially announced.

It takes about 15 minutes to reach Haradanien.

The bus on the run from March 30th. 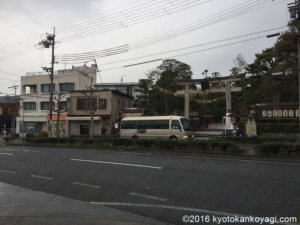 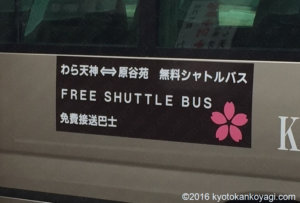 The bus departs in front of Torii gate of Waratenjin shrine in the photo (The red alien in the map. Haradanien is indicated by the purple alien.).

There is Waratenjinmae bus stop near there (The blue bus in the map.). It is a bus stop for Kyoto city bus. NOT for HARADANIEN SHUTTLE BUS.

WAIT IN FRONT OF THE TORII GATE!

Attention: The shuttle bus will be out of service on 22th April.

How to get on the Shuttle bus?

Take No.50 at B2 bus stop. Get off at Waratenjin mae bus stop. Walk in the same direction the bus goes. A couple of minutes later, you will see the Torii gate of Waratenjin.

Only bus M1 goes to Haradanien. It departs at Kitaoji bus terminal or Ritsumeikan daigaku mae. The most important thing to know is that it departs only 1 time an hour and it is crowded with people head for Haradanien. It would be better to take shuttle bus.

Hatsumode in Kyoto 2022 : Yasaka shrine provides you with extreme blessings!