Daisenin is a sub-temple of Daitokuji temple. It is not allowed to take photo there.

The Hojo has 3 gardens. It was believed that it was constructed in 1509 by Kogaku Soko, the founder of the temple.

The first one has rocks. There is a stone stands for Mt. Horai where enlightened person live. In front of it, there are Tsuru shima (Crane island) and Kemashima (Tortoise island). A stream of gravel begins runs from Mt. Horai to the adjacent garden divided by a wall.

The stream passes through the hole of the wall to make a river, entering the 2nd garden. On the river, there are stones remind us of sailing ships.

The river runs, under a ceiling connecting the entrance hall and Hojo, to the 3rd garden to make ocean. Raked gravels make waves and there are two mountains of gravel among them.

We can see the way of a small amount of water in the mountain become the vast ocean in the 3 gardens.

How to get to Daisenin temple? 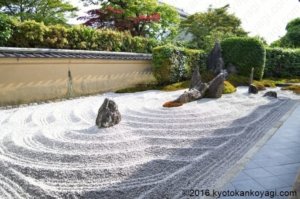 Zuihoin has 3 gardens. The largest one is Dokuzatei, facing south. Dakuza is a Zen word. It is a state of mind of host of tea ceremony: In a tea room, a host contemplate a guest who left some minutes ago.

The garden was designed by Shigemori Mirei in 1961 to celebrate the 400th anniversary of the death of the founder of the temple.

The stones located near the shrubs stand for Mt. Horai. The raked gravel makes strong waves. The solidity of them gives the garden a signature of Mirei. 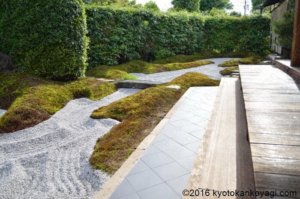 The east side of the garden, on the other hand, the waves enter the inlet with complete silence. 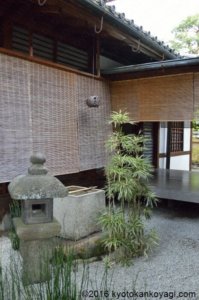 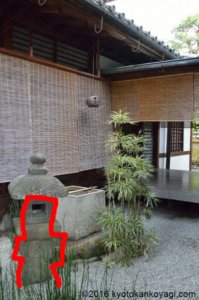 There is a small garden in front of a tea house. We can find a samll stone lantern. It has some secret. Stone lantern usually has a straight shaft. Take a look at the lantern in the photo. The saft of it is not straight. It has a deformed shape of crucifix.

During Sengoku period, Christianity was banned in Japan but some feudal lords believed in it. They are called “Kirishitan Daimyo (Christian feudal lord).” Otomo Sorin, the founder of Zuihoin was one of them. He hided his belief in the garden. At the bottom of the shaft, a picuture of Holy Mary is engraved (Gravels hide it). 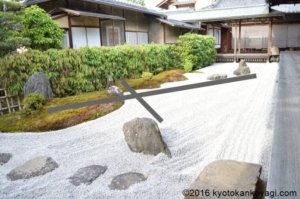 Let us stand our back against the lantern. We are face to face with Kanmintei and the crucifix hidden in it. Seven rocks make a big crucifix.

How to get to Zuihoin? 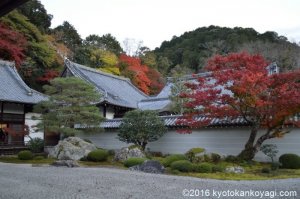 Nanzenji is at the top of Gozan ranking of Zentemples in Kyoto. It was rebuild in Edo period by Kobori Enshu and 2 Karesansui gardens.

Take a look at the wall in the garden. It has 5 stripes. Each stripe is called “Jyogisuji.”  5 Jyogisuji were only allowed to the highest ranked temples.

In early period, 5 stripes are only for Monzeki temple. Monzeki temple is a temple run by a descendant of the Royal family. Nanzenji is not a Monzeki temple but it was founded by the order of Emperor Kameyama and Hojo building used to be in the Imperial palace. I suppose they are the reason for the 5 stripes.

In Hojo garden, there are large rocks stands for tigers. It has the same meaning as the garden of Ryoanji  temple: Toranoko Watashi.

It is a long story and check the link out!

How to get to Nanzenji temple?

Daijosai 2019: The Emperor Naruhito show his respect and gratitude to Amaterasu Ohmikami

Daijosai is the first Niinamesai the Emperor holds in his rein. It is a ritual in which the Emperor shows his respect and gratitude Amaterasu Ohomikami, the most admired Deity in Shinto and the ancestor of the emperor.
2019.11.10

In 2002, lots of events are abbreviated or canceled due to COVID-19. Gion matsuri is one of the oldest matsuri/festival in Japan.There are many rituals held in July. In this article, you can see exact schedule they are held.
2019.05.27