What does the word “Zen garden” mean?

The term “Zen garden” sounds strange to us because Japanese language doesn’t have the word. The gardens it intends to describe is “Karesansui (枯山水)” garden.

“Karessnsui (枯山水)” stands for “Dry garden.” “Kare” means dry and “sansui” does garden in old Japanese. Why is a garden dry? Let us make it clear with an introduction to Japanese Karesansui garden.

A short history of Karesnsui garden 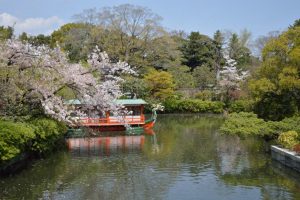 Karesansui garden was invented in Muromachi period (1336 – 1573). Before the invasion of Karesansui, water, usually pond or stream, was indispensable to Japanese garden. In ancient time, Japanese people adored nature. Due to our traditional animism, water represented dignity and fertility of sea in garden. 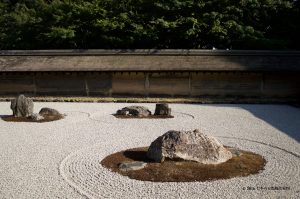 In Kamakura period (1185 – 1333), Eisai, the founder of Rinzai school, introduced Zen to Japan from Son dynasty of China. In its philosophy, “Wabi Sabi (侘びさび)” was worshiped. The word means “Solitude and poverty.” In this conception, things shall be simple to be prolific and profound. Typical Karesansui garden has no waterfall or stream, only small sand pebbles make pond or sea instead. We can find no plants except moss or evergreen. A glimpse of small rocks reminds of islets on vast ocean… Zanzan Johsui of garden sometimes it makes us wonder. “Zanzan Johsui (残山剰水) ” is an art of ancient Chinese painting. In this technique, artist depicts a part of subject to describe the whole.

In addition to it, our point of view was on the verge of changing: People enjoyed strolling around in garden before the introduction of Karesansui and when Zen gave birth to Karesansui, garden became a thing to be enjoyed from a room in Hojo building adjacent to it. The garden in Tenryuji temple was a good example of an intermediate of Karesansui and its ancestor: It has a pond and sand field. We can walk along the shore and admire a view of it in a room of Hojo. (It is designed to be seen from Hojo.)

In Kamakura and Muromachi period, Zen and Rinzai shool Buddhism was so popular among Samurai and commoners that many Zen temples with Karesansui garden was build. 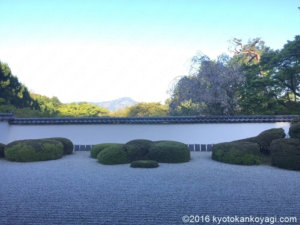 The Hojo garden was designed by Konori Enshu, the most famous garden designer in Edo period. From left to right, 3 groupings of shrubs of Satsuki. Each grouping has 3, 5, and 7 shrubs individually. The garden has the same meaning of the rock garden of Ryoanji temple: Toranoko Watashi. Toranoko watashi is a populare theme of Karesausui garden. Check the link out to make sure of it. 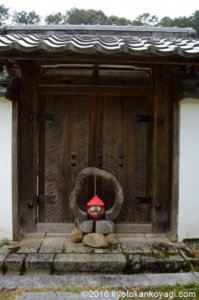 Now take a look at a door to the garden (It is usually closed). 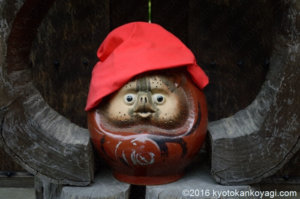 The door is □. The wooden circle is 〇. The cap a racoon wears is △.

Zen loves these signs.  □ means preoccupied mind. 〇 stands for the truth. △ does indicate a state in which we are Buddha.

The garden belongs to Hojo. Hoji is a building for reception in Buddhist temple. The ceiling of the that of Shodenji temple has blood stain.

On 8th August in 1600, over 300 warriors of Tokugawa army made Seppuku in Fushimi castle. In the summer heat, their corpses had been on the floor for a month to make blood stain on it. The floor was brought to some temples in Kyoto, including Shodenji, to make ceilings of them for the purpose of praying for the peace of the souls of the Samurai. A monk of a some temple which has blood stain ceiling told me that even our presence under the ceiling would ease their pain.

Shodenji is located rural area in Kyoto. All we can hear there is chirps of birds. Enjoy the best Zen garden on the planet.

As though we were on the top of the world!

How to get to Shodenji temple?

It would be better to take taxi to go there! 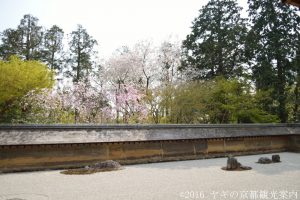 The “Zen rock garden” of Ryoanji is the most famous Karesansui garden in the world. In addition to it, the most mysterious garden: Ryoanji temple was burnt out many times in its history. I suppose documents about it and its garden was lost completely. As far as I know, the oldest one is a guidebook of Kyoto named Miayako Meisyo Zue in 1780. The book has no reference to the garden because Ryoanji was famous for mandarin ducks in the pond before Queen Elizabeth ll visit. 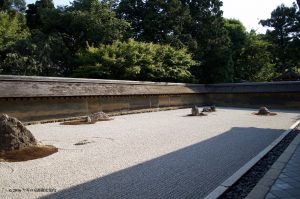 We have anther mystery: No one can tell what the garden means. Usually, Karesansui garden is has theme. For example, the garden of Korinin temple means a Buddhist creed. On the other hand, we are at a loss for it meaning of that of Ryoanji’s. It is commonly believed that it implies ancient Chinese anecdote called Toranoko watashi (A tiger mom crosses a river with her babies.). If you interested in the story, see the link below.)

The garden is extraordinary Karesansui. The view of it makes us fell as though we were in the center of the Universe. To our regrets, it is so famous that it always crowded with tourist. If you wanted admire it, it would be better to be the first or the last visitor of a day.

Enjoy Rryoanji in complete silence. I was the last visitor of the day.

kyotokankoyagi.com
The meaning of Ryoanji Zen Rock Garden
No one tells the meaning of "The Rock Garden" of Ryoanj in Kyoto precisely despite its fame. Fortunately, we have some hypotheses. In this article, we make an inspection on the garden with them.

How to get to Ryoanji temple? Komyoin has the most overlooked Karesansui garden in Kyoto. It is only known to so-called “Kyoto enthusiasts.” The garden is designed by Mirei Shigemori, a famous garden designer in the 20th century.

The garden is named Hashin no niwa. It was named after a Zen riddle. An apprentice asked a Zen master what Buddhism. He answered “With calm mind, the answer appears as it is as the moon appears on a surface of pond or sea.” 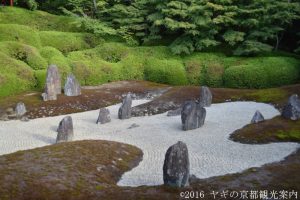 It is also known as Niji no Kokedera (The moss garden over the rainbow). Mirei is famous for his technique of take advantage of moss in garden. The mosses on the garden stands for calm sea shore against roaring ocean.

There are 75 stones in the garden. 9 of them represent Buddhist statues.

Komyoin always has scarce visitors except in the season of Autumn leaves. It is one of the best place to meditate in Kyoto. 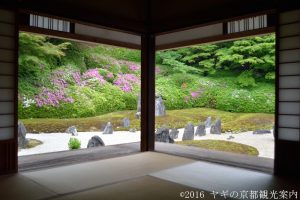 It shows a good example of our attitude for nature. Traditional Japanese house has usually has sliding doors instead of walls. In warm season, we remove them to be in nature. Nature is always close to us and we show our gratitude for it. 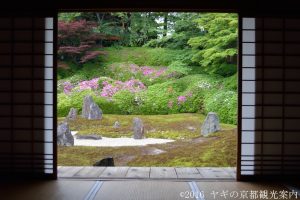 We always enjoy Gakubuchi Teian technique. It is an art to admire garden. We consider window as a picture frame.

How to get to Komyoin temple?

How can we take buses in Arashiyama? It's a difficult question to answer because the routes buses take depend on a day of the week. In this article, I'll show you the way you take. In addition to it, I'll also show you the train station in Arashiyama because buses sometimes crowded.
2020.10.08

The report of 2022 on Kawazu Zakura, the earliest bloom Sakura in Kyoto. We can find some of them in Ichijo Modori bashi bridge, Toji, Unryuin, and Philosopher's path.They go into full bloom around mid-March.
2022.02.03
スポンサーリンク
京都での混雑回避方法：オーバーツーリズム対策
京都の紅葉の見頃情報2022令和四年/11/26: ほぼ全域で見頃に突入
スポンサーリンク