The garden of 16 Arhats 十六羅漢石庭 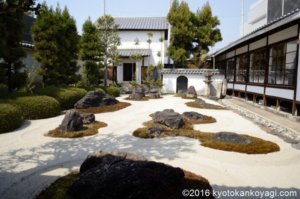 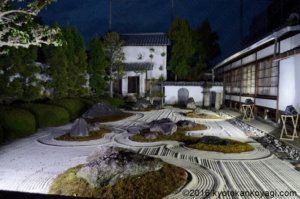 Arahat is a person who reached Nirvana. The garden of Myorenji temple has 16 stones and they are Arhats. It was designed by a disciple of Kobori Enshu.

The gravels means the universe and the stones also means Bodhisattva coming from earth. These elements tell us that we are face to face with the whole universe and its truth. The waves around the rocks show us the way we are in response to the universe.

The biggest rock is called “Gagyu Seki (Rock resembles lying down ox).” When a monk of Myorenji visisted Toyotomi Hideyoshi at Fushimi castle, Hideyoshi said to him that he would give him anything he wanted. The monk said he wanted Gagyu Seki in a garden. Hideyoshi promised him to give the stone and the monk left the castle.

When he came back to Myorenji, he found the stone in the garden with surprise.

In the spring of 2019, the garden was illuminated for the first time.

It was SO AMAZING!

How to get to Myorenji? 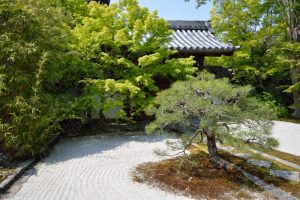 Tenjuan has also an underrated Karesausui garden. It is only know to Kyoto enthusiasts. In the season of Autumn leaves it welcomes many visitors as other landmarks do. In other season, it is one of the most calm place to visit. It is also the best place to meditate.

The garden is designed by Kobori Enshu, the famous artist/arsitcrat in the 16th century. There are passages there. They are made of stones on moss bed. One of them are made when Tenjuan was established in the 14th century. 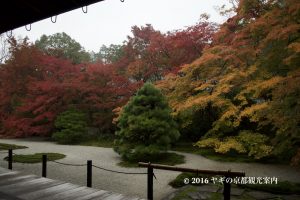 It has evergreen (Japanese pine tree) as other Karesansui garden do but also has maple leaves. These trees are so warm. Without them, we get so tense: The garden has enormous strength despite its tranquility. 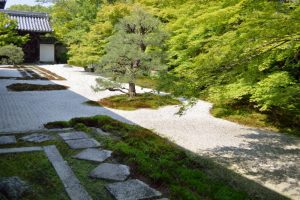 The peculiar thing in Tenjuan is that the garden faces north. Usually, Karesausui garden faces south because white sands of it reflect the sun light to light the rooms in Hojo. In Tenjuan, we are able to admire the garden in shadow for a long time. Owing to the shadow, the garden has plenty of mosses. The mosses keep the garden alive and give the strength to it. 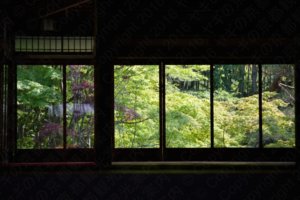 Tenjuan also has a stroll garden. At the entrance, we can enjoy Gakubuchi Teien view of it. 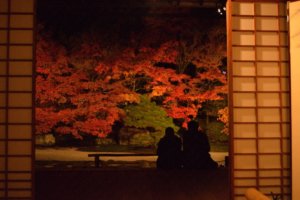 19 night illumination spots of Autumn leaves in Kyoto 2020
The top 19 sites to enjoy autumn leaves illumination in Kyoto. In 2021, some are canceled due to COVID-19. You can learn what to see in each site, opening hours, entrance fee, and the ways to get there.

Enjoy the Zen and stroll garden in snow.

How to get to Tenjuan temple