Only Hojo of Tofukuji has 4 gardens facing 4 direction. Hojo buildings in other temples usually has 2 or 3 gardens.  These 4 gardens tell us “Hasso Jodo”. Hasso Jodo is way to describe a life of Gautama Buddha in 8 aspects. These gardens were also designed by Shigemori Mirei. 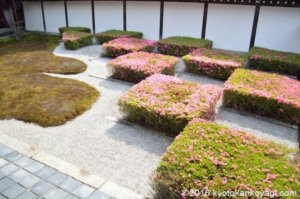 The west and north gardens are not Karesansui gardens as you see. They have well-trimmed Satsuki shrubs. 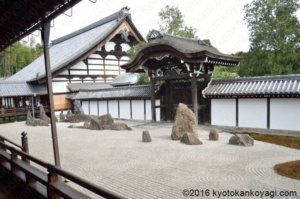 We can see groupings of rocks. From left to right, Eiju(瀛洲), Horai(蓬莱), Koryo(壷梁), and Hojo(方丈). They are islands in which enlightened person live. Raked gravels are whirlpools and small hills are mountains. 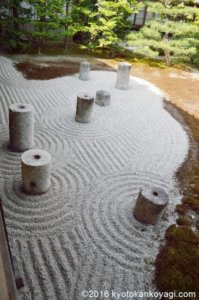 These pillars stands for the big dipper.

How to get to Tofukuji temple? 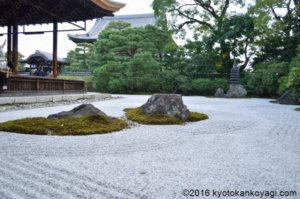 Daihoen garden is the largest one in Kenninji temple. Daiho is a name of a mountain. It is also called “Hyakujyozan.”  It was named after Hyakujo Zenji, a monk who founded a system of Zen school. The garden was designed by Ogawa Jihei Vll, a talented garden architect in modern days.

The rocks stand for Hyakujozan and other mountains and the peculiar big wave crosses the vast ocean. 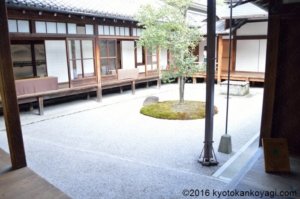 We can find the same signs at the door of Shodenji temple. A moss island is circle, the line in the garden makes triangle, and the garden itself is square. 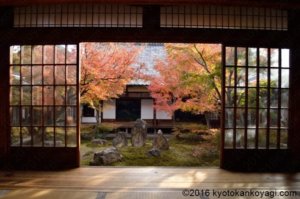 Cho on means that the truth comes to us as waves rush to shore. The garden has the same meaning of the second story of Kinkakuji temple. It was designed by Kitayama Yasuo, known as Kobori Enshu in Heisei era. The stones represents statues of Buddhas.

How to get to Kenninji temple?

The real name of "Afro Buddha" is "Goko Shii Amidabutsu.（五劫思惟阿弥陀仏）" It means that a Buddha meditates forever. In this artile, you can learn the reason of its hair style and its features, souvenirs and so on.
2020.01.20