Hatsumode (初詣) is the first visit of a year to Shinto shrine or Buddhist temple to pray for prosperity in the year. The origin of it is a custom called “Toshi Gomori.” On Toshi Gomori, a head of a family spend a night on 31st December in a Sinto shrine enshrines “Ujigami.” Ujigami is guardian Deity of a region where a family lives.

These days, Japanese people go to Ujigami shrine or other ones they like on 1st~3rd Januray. They pray for prosperity and their wish to Shinto or Buddhist Deities. After prayer, they have amulets (お守り) or fortune telling (おみくじ).

In this article, I’ll show you the way to make Hatsumode to Yasaka shrine, the best shrine which gives you an extraordinary blessings to you.

Usually, Yasaka shrine opens 24 hours a day and we can visit there any time we want except 31st December. On the day, around 11 p.m., all five entrances of the shrine is closed and the south entrance (the blue alien) and the north entrance (the red alien) are opened again around 12 a.m. The entrances indicated by the yellow, green, and vermilion gates work as exit.

After the gates are closed 入口が閉鎖されたら

We wait in line to go to the main hall to pray. (The purple line in the map). The shrine is crowded with many people and we cannot walk as we like. When the new year starts, we move toward the main hall gradually. We have 2 one-way routes to take: the red line and the green line in the map. The blue line is not a one-way route. We can go to the red line to the green, vice versa.

I’ll tell you something very important!

1) In the midnight, it is SO COLD! Prepare for it! 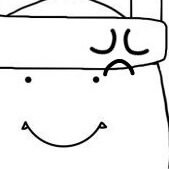 2) We have only ONE rest room in Yasaka shrine. It might be better to be near it.

When do we visit Yasaka shrine as Hatsumode? いつ行くべきか

Yasaka shrine accept around 1 MILLION visitors in the three days. Most of them (I suppose nearly half of them )visit there on the 31st of December and the 1st of January.

The best time is around 5 a.m. We can enjoy Okera sai. I’ll show you what it is later.

Okerabi, and Okerasai. You may think these are the same thing or take place at the same day. Acturally, they are quite different. At first, let us discuss Okerabi をけら火/おけら火.

Okerabi (the photo above) is lit on the 31st of December. We light a rope with it and bring the fire to our home to make the fist meal of a year. The rope is called “Kichyo nawa (吉兆縄)”,  specially made of slivered bamboo for Okerabi. We can easily find persons who has lots of ropes at Yasaka shrine on the day. We can buy the rope from them for 700 yen. They stop selling around 10~11 p.m.

Want Okerabi? You better be there by 9 p.m. Yasaka shrine is so crowded!

The second is Okerasai (白朮祭). It is a ritual held at 5 p.m. on the 1st of January. Priests set fire on wood shavings with Goshinbi fire made in a ritual held 4 days before.

Huge torches of Gion matsuri festival is also lit with Goshinbi. Check out the following article.

Okeramairi 2021 and Okerabi 2020of Yasaka shrine, Kyoto
On December 31st and January 1st, people have Okerabi at Yasaka shrine. Let us learn its history and the way to enjoy them!

We can’t get Kichyo nawa on Jan. 1st. Get it on the day before!

The Deities and blessings they offer to you 八坂神社のご利益

He has blessings on Victory, marriage, love. When Yasaka shrine was a Buddhist temple, he was fused Gozu tenno, the Deity who save us from maladies. So, he has the same blessing.

She married Susanoo no mikoto, she has blessings for marriage, love, and good fortune. 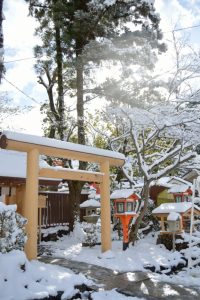 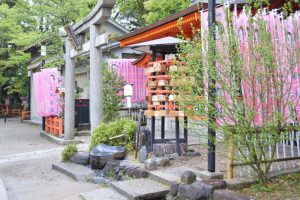 When there was a conflict between Amatersu Oh mikami and Susanooo no mikoto, they proved his innocence. In the Shinto, innocence is equivalent to beauty. So, they gave us blessings on beauty.

Ichikishima hime used to be fused with Benzaiten. Benzaiten is a Deity originated from Saraswati, the Hindu goddess. She has blessing on the good fortune. She has a strumming instrument called Biwa and has blessing on music. 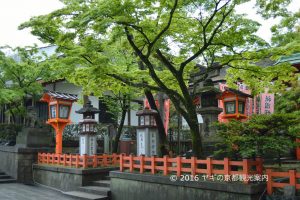 It enshrines Kotoshiro nushi a.k.a. Ebessan. He is a Deity of ocean and fishery and blessings on them and prosperity. 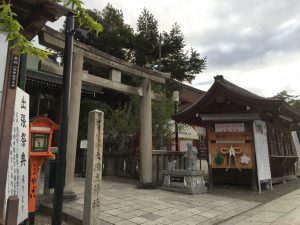 Oh kuninushi no mikoto is a Deity brings us good partner. He saved the life of a bunny and it fore see his future marriage. On this episode, he is considered of Deity of “Goen.” Goen is a relationship between two things. He and the bunny is very popular among love-seekers. 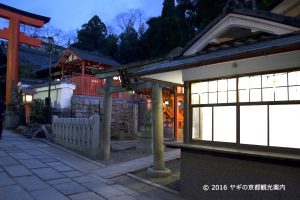 Tamamitsu Inari enshrines Ukanomitamano mikto who enshrined in Fushimi Inari Taisha and Myobu Inari. Both of them are so called “Oinari san.” They brings us prosperity. If you are interested in Oinari san, check the link below.

Where do we get them? 授与所

We get them at Syamusyo usually but there are temporary Syamusyo around the main hall. 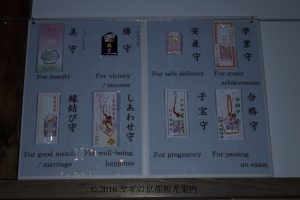 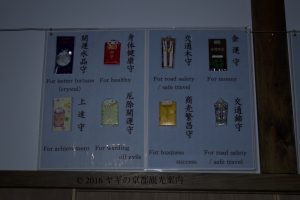 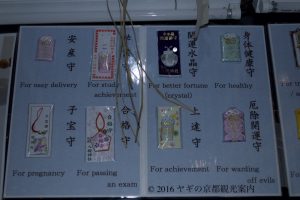 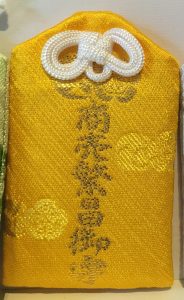 Omamori is an amulet which saves you from bad luck.The left is a traditional “Omamori” .The right is a “Card-Omamori” as small as bank card.

There are many kind of amulets. From 500yen 〜 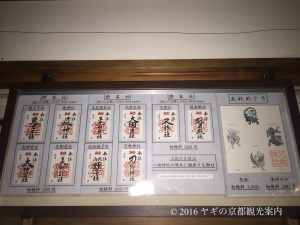 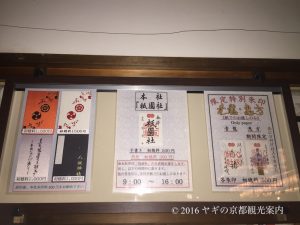 Gosyuin is a stamp and a kind of an autograph of shrine. At Yasaka shrine, we can have many Gosyuin. 300 yen~ 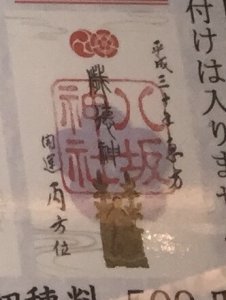 We can have special Gosyuin! From December 13th to Feburary 3rd, Ehoin gosyuin is aveilable for 500 yen! Don’t miss it! 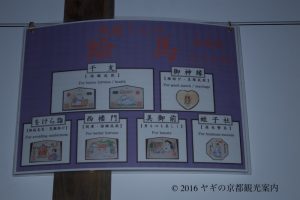 If you have wishes, you can offer “Ema(絵馬)” to Deity. Write your wishes on wooden plate.

“絵馬” means “a horse in picture” In the days of old, people offer real horse to kami.It is hard to keep horse in shrine these days.So people offer wooden plate instead. 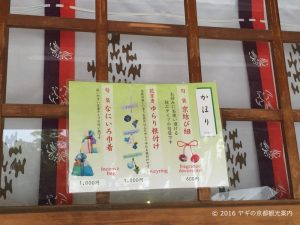 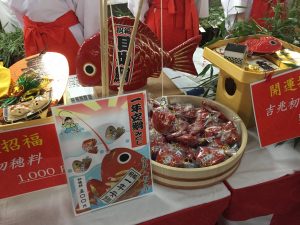 How to get to Yasaka shrine of Hatsumode days? 初詣時のアクセス

As I indicated before, about one million people visit Yasaka shrine. Most of them go there on Kyoto city bus. So, it would be better to take trains.

The stations located near Yasaka shrine are: Keihan Gion Shijo station and Hankyu Kawaramachi station. It takes around 10 minutes walk to Yasaka shrine from them.

Kitanozakura is the last-blooming Sakura in Kyoto. It is only found in Kitano Tenmangu shrine. Usually, it starts to bloom around April 15 and is in full bloom in around 20th.
2020.03.18

Gion Ebessan/Ebisu festival is held at Yasaka shrine. In 2022, Ebessan boat parade was canceled due to COVID-19. With lots of photos and video, you can learn about the festival like Ebessan boat and Seven Deities/Gods of fortune, etc.
2019.01.07
スポンサーリンク
八坂神社初詣2022はコロナにご利益あり：参拝時間、屋台、をけら火を解説
かるた始め式於八坂神社2022はコロナで中止
スポンサーリンク