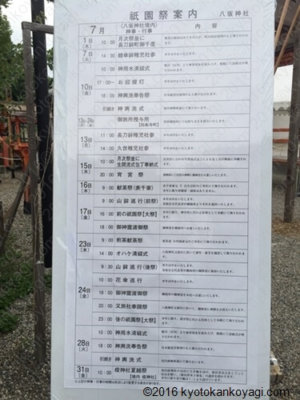 On April 20, it was announced the cancellation of  Yamahoko parade, Yoiyamas of Sakimatsuri and Atomatsuri. Since then, there had been no information on Gion Matsuri until June 30. On the day, we were able to see the information board on the photo at last.

It indicates the schedule of the 2020 and tells us that lots of rituals and events are canceled or abbreviated.

In this article, I’ll show you popular rituals and events in 2020.

This site cannot guarantee your safety. The information is subject to be changed. This site is not responsible for any disadvantages you have at all.

The schedule was altered for the fear of clusters.You know what I mean?

The most important thing is that Gion Matsruri is held in 2020 though were are in the midst of COVID-19. The reason dates back to some 1,000 years ago: Gion matsuri started to conquer epidemics. In 869, Kyoto suffered from small pox and other epidemics. The Imperial court ordered Gion sha (the former name of Yasaka shrine) to held (Gion) Goryo-e ritual (the former name of Gion Matsuri). Since then, Gion matsuri was held to fight against epidemics.

I’m sure we cannot understand Gion Matsuri without the article.

To our regret, most of events are abbreviated. Enjoy Gion Matsuri in the videos!

In Matsuri, Deities leaves shrines and temples on Mikoshi and stay in cities for the time of being. This is an usual way of Matsuri. On the other hand, some situations prevents Deities to leaving them. In these cases, Deities are stay in shrines and temples. This form of Matsuri is called Imatsuri (居祭). This year, many Matsuri was held as Imatsuri due to COVID-19 and Gion Matsuri is not exemption. 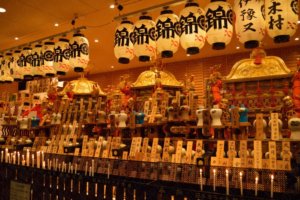 In Gion matsuri, the Deities of Yasaka shrine head for Otabisho at Shijo Teramachi.

On the other hand, priests put Goshinrei (御神霊 /spirits) of Deities into Mikoshi at Mikoshi warehouse this year.

As indicated in the link the baby deer recommended, it is important the Deities stay in the center of Kyoto city. In this year, the Deities go and stay in Otabisho though Gion matsuri is Imatsuri this year. As described before, Deities remain in shrines and temples. I don’t know the exact reason but I’m surethis has something to do with the nature of Gion Matsuri: To save Kyotoites from epidemics. Yasaka shrine decided to send spirits of the Deities to the city for this purpose.

Though priests send the Deities to Otabisho, I have no idea of the way take. 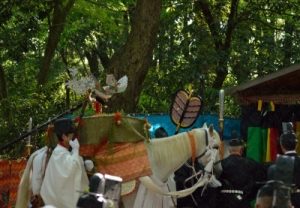 Gosinrei is usually left shrines and temples on Mikoshi but it is not the only way. For example, the Deity of Mikage shrine in a container called Goshipitsu (御神櫃) on the horse’s back in Mikage matsuri, Matsuri held prior to Aoi Matsuri. 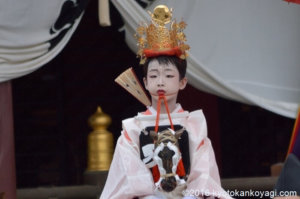 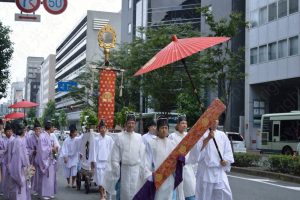 The priest under the umbrella holds a long board. It is Onchokuban or Gochokuban. On the board, the order of Emperor Enyu was written: The order askes Gion sha (the former name of Yasaka shrine) to hold (Gion) Goryo-e ritual (the former name of Gion Matsuri) to save Kyotites form epidemics. This board also leads Mikoshi and we may not see it in the same reason of Kuze Komagata Chigo.

The nature go Gion Matsuri and the role of Yamahoko 祇園祭の趣旨との関係

In 2020, Yamaho parade was canceled. As also indicated in the link the baby deer recommended, Yamahokos gather Ekishin and they play important roles in Gion Matsuri.

I suppose the parade was canceled because to prevent clusters: Yamahokos are so popular and if once they were build, they would give birth to clusters. 。

Ocigosan means child. We have some Ochigosan othre than Kuzakomagata chigo: Ikichigo of Naginata hoko and Ayagasa hoko chigo. They visit Yasaka shrine before the parade usually but this year, these rituals were canceled. Enjoy them in the videos.

We are not sure Hokotate (building of Yamahokos) were canceled because we have no official announcement.

Yoiyamas are held prior to Yamahoko parades. They also were canceled to avoid clusters. And it leads many events belong to them. For example, Abare Kannnon (Roaring Kannon) will be canceled.。

They are popular rituals and events canceled or abbreviated in 2020.

Gion matsuri festival in Kyoto 2022: Yamahoko Parade for the 1st time in 3 years!!!

Yamahoko Parade will take place in 2022. The guide on Gion matsuri festival in Kyoto; its schedule, history, the reason why it is celebrated,  the routes of Yamahoko parade, Yoiyama, souvenirs, and other must-sees.
2017.11.02

In 2002, lots of events are abbreviated or canceled due to COVID-19. Gion matsuri is one of the oldest matsuri/festival in Japan.There are many rituals held in July. In this article, you can see exact schedule they are held.
2019.05.27

In this article, you can learn all 36 Yamahoko floats of Gion Matsuri festival with their "Tujimawashi" videos and short tips. The information of their Goshuin stamps and souvenirs are also available.
2020.06.19
スポンサーリンク
祇園祭2020変更点：居祭、山鉾巡行・宵山・鉾建ては中止
Gion Matsuri festival 2021: Kuze Komagata Chigo, the most important figure 久世駒形稚児英語で説明
スポンサーリンク