Hideyoshi’s government was fallen by Tokugawa Ieyasu. He established Tokugawa Shogunate in Edo (present-day Tokyo) and Japan was under control. The empror and court nobles are not allowed to participate in politics in terms of law. 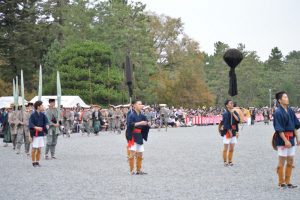 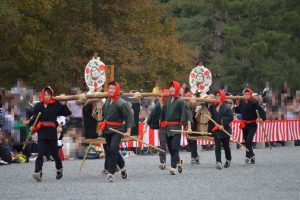 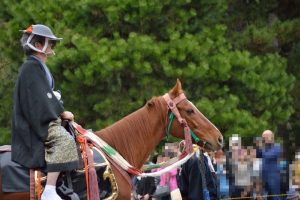 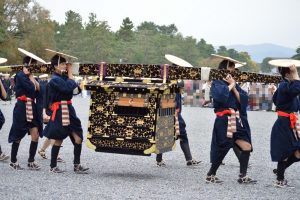 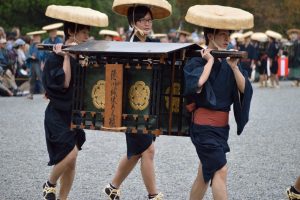 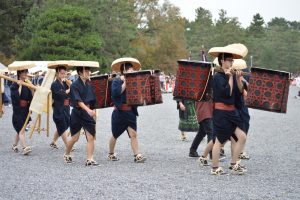 Under the rule of Tokugawa Shogunate, the emperor was highly respected because his legitimacy depended on Japanese mythology. Shogun was a person who had a premission to rule the country. 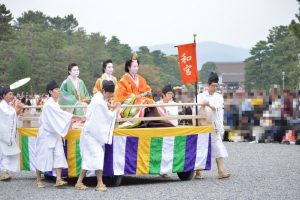 She is Kazunomiya. She is a daughter of emperor Ninko and married to Tokugawa Iemochi, the 14th Shogun of Tokugawa Shogunate. 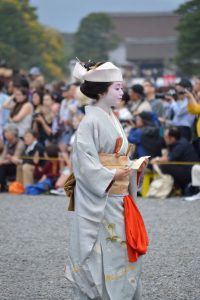 She is Otagaki rengetsu, a famous poet in the period. 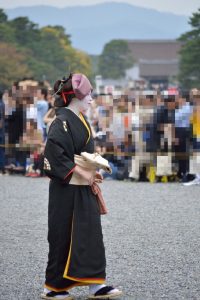 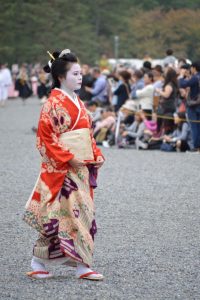 The lady in black kimono is a wife of a prosperous merchant. One day, a style competition was held. Participants except her were in gorgeous kimono. On the other hand, she wore simple and elegant black kimono and let her maid (the lady in red kimono) wear beautiful kimono thanks to the advice of Ogata Korin.

In the 19th century, the renovation of Japan took place: The Meiji Restoration. Tokugawa Shogunate returned the previlage to rule the archipelago to the emperor for the purpose of carrying on renewal to give strength to the country. 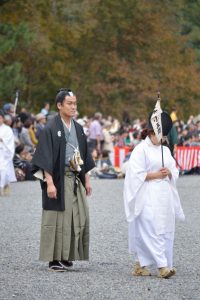 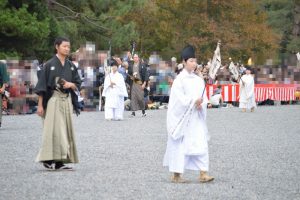 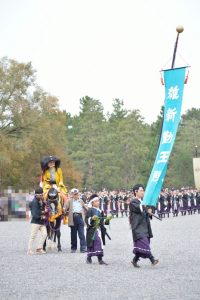 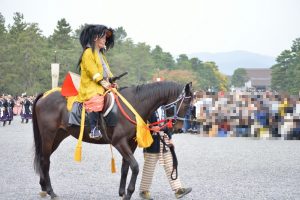 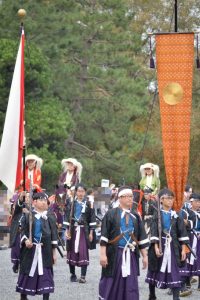 When Meiji restoraton was still on, rebellions fought the war. This Ishin Kino tai army from Kyoto joined the Imperial army of Meiji restoration to put down them. 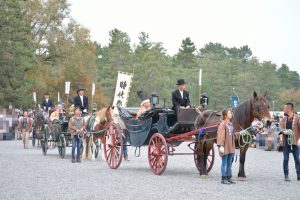 The governor of Kyoto prefecture and the mayor of Kyoto city lead the parade.

The route and time schedule

These times means the time the top of parade arrives the place. It takes about 2 hours for the parade to pass through a point.

The yellow lines in the map indicate the reserved seat. Check the official site below.

On the day of Jidai matsuri, routes of buses are changed. So, it is good idea to take subway or taxi. Bus is not recommedned.

The aliens are entraces and the yellow lines are reserved seat area.

A forecast of Sakura 2020 in Kyoto. There are many cherry blossoms a.k.a. Sakura and Migoro, the best time to enjoy them lasts for a month. In this article, we divide Migoro into 3 peirod; March, late March to mid April, Mid-April, and around April 20.
2020.03.10