Ladies in the Middle ages 中世婦人列

This unit shows us ladies in 12~17th century.

She is Yodo dono, a concubine of Toyotomi hideyoshi. She dressed in typical outfit for lady in the 16th century. 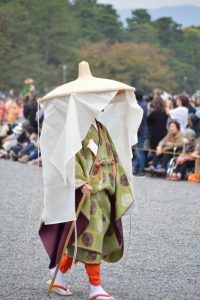 She is Abutuni, the author of Diary of the Waning Moon. It describes how Japan was ruled by the empror and the imperial court and Kamakura Shogunate. 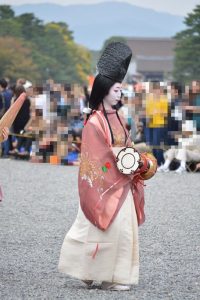 She is Shizuka Gozen, a tragic heroin in Japanese history. She is in typical dancing outfit. 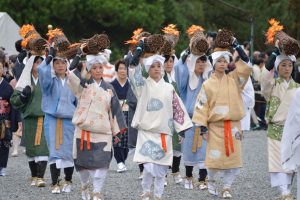 They are Oharame ladies in the 16th century. They bring firewoods on their heads. 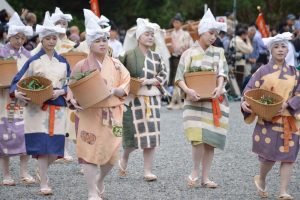 They are Katsurame. They came from Katsura region and sold sweetfish or candy in the center of Kyoto.

In this period, two emperors ruled Japan and the Imperial cout was devided into two. 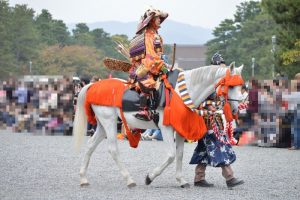 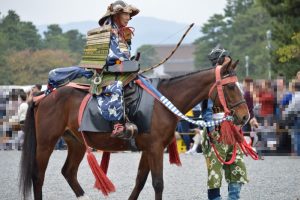 Emperor Godaigo was ousted to Oki because he attempted to overthrow Kamakua Shogunate. With the fall of the Shogunate, he escaped Oki and came back to Kyoto. The worriors are security guards of him.

The moast recommended 20 sites to admire night illumination of cherry blossom or Yozakura in Kyoto.
2019.01.29

Haradanien is a private garden only open to public in spring and autumn. It is little-known place and not a famous place to enjoy cherry blossoms like Heian Jingu shrine. It is the most popular destination among Kyoto-enthusiasts. It is well-kept secret place.
2019.02.28
スポンサーリンク
平安神宮のみどころと平安京の歴史【京都観光】
東寺の紅葉ライトアップ2021は10/30～12/12：2022桜ライトアップはコロナで中止かは未定
スポンサーリンク