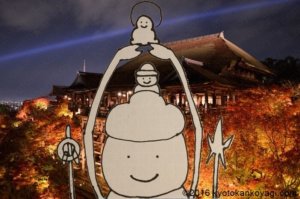 Seiryue, or “The ritual of the blue dragon,” is a mobile ritual held in Kiyomizu-dera temple. The temple enshrines Senju Kannon. She is well known as the shape-shifting Deity of mercy. In Kiyomizu-dera, she transforms into a blue dragon. Take a look at the picture above. Over the roof of the temple, there is a beam of blue light. It stands for the dragon.

In the ritual, the dragon and monks stroll around in the temple and its neighborhood to bring it good fortunes.

We can enjoy it spring and fall.

Make sure what it is.

As described before, Seiryue is a mobile ritual. It looks like a parade. Participants stroll around Kiyomizu-dera temple and its neighborhood. In this chapter, let us see who they are. 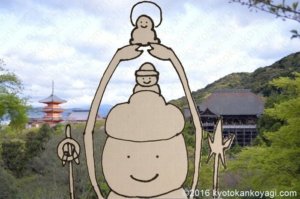 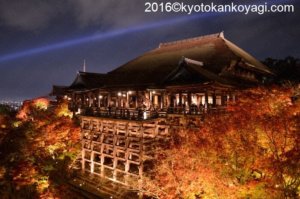 Previously introduced, Senju Kannon of Kiyomizu-dera temple becomes a dragon. It is believed that she leaves the main hall and visit Otowano Taki fall to drink water. The fall is located in the temple.

Heiankyo (the ancient name of Kyoto) is constructed in “Shijin Soh Oh” philosophy. In this, the Four Sacred animal saves a city. They stays in north, south, east, and west of it. Kiyomizu-dera is in the east of Kyoto and a dragon saves it there. I suppose this is one of the reasons people saw Seinju Kannon as a dragon in Kiyomizu-dera. 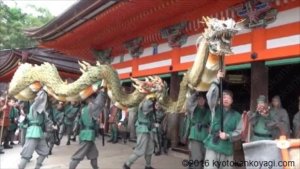 In Seiryue, She appears as a 60′ paper dragon. 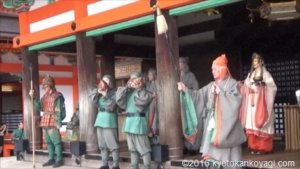 He is a chief of Seirue. He holds a stick which has a dragon head.

They plays sea-shell instrument called “Hora-gai” and lead the parade. 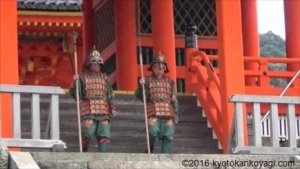 Shiten noh are the four Deities who guards Buddhism. In this ritual, they are guardians of the dragon. 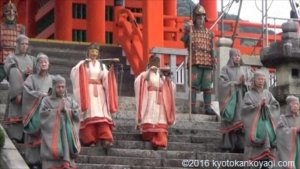 They are the 12 guardians of the Mahaprajnaparamita Sutra. They stroll around saying, “Namu Kanzeon Bosatsu (We believe in Kannnon).” 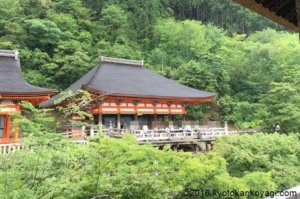 They also are the guardians of Buddhism. He is enshrined in a small temple belongs to Okuno in temple in Kiyomizu-dera. 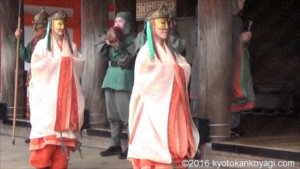 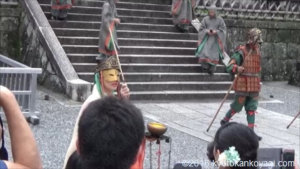 In Seiryue, he transforms into two ladies. They splash “Hako Kudoku Sui” water over us with sticks to give us good fortune.

Seirue consists of 3 must-sees. Let see us what they are.

In Okunoin temple, Kannon is enshrined as in the main hall of Kiyomizu-dera temple. In Hakko Kudokusui no Gi, she gives Yasha Shin Hakko Kudoku Sui water. It is the sacred water found in Fudaraku Jodo paradise Kannon rules. Yasha Shin give us good fortune for us as described before.

After the ritual, the parade heads for Saimon Gate by way of Otowano Taki and Kyodo temple. 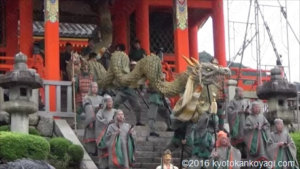 Saimon used to be the main gate of Kiyomizu-dera temple. In Seiryue, the parade walk through it. In front of the gate, the dragon performs “The dragon dance.”

After it, it goes to it to a couple of shops in the neighborhood to give them good fortunes.

This is the most exciting thing in Seirye. Have splashes of Hakko Kudoku Sui water!

After that, the parade goes back to Okunoin by way of the main hall. Yasha Shin give back Hakko Kudoku Sui water to Kannnon to complete Seiryue.

How to get to Kiyomizu-dera temple? 清水寺へのアクセス

Due to COVID-19, Kamo Kyokusui no En 2021 is canceled. Kamo Kyokusui no En is a party in which poets compose poem in an extraordinary beautiful music. It started as a ritual of the Imperial court. Let us learn about it.
2019.04.12
スポンサーリンク
The renovation of Kinkakuji temple 2020 金閣寺の工事英語で説明
京都の紅葉コロナ対策2021：ソーシャルディスタンス維持可能な穴場ランキングベスト10
スポンサーリンク